I have been using v10 for years. I just upgraded, on a trial basis to v12.2. I am running it in light edition mode. When I start it up it takes about 2 minutes to display the initial listing. V10 was almost instantaneous. This is definitely NOT an improvement. I am running W10 pro on an i5 pc with 8G RAM and an SSD.

Are you using the default toolbars or custom ones?

Does the slowdown only occur when opening certain folders, or types of folders (e.g. network drives), or folders with certain types of files (e.g. large exe installers, or videos)?

Does the slowdown only occur if the folder tree is open?

Using Process Monitor to see which paths are being accessed during the slow start will probably shine a light on where the delay is coming from. If you log filesystem activity with it, start Opus, and then save the log (File > Save, and choose PML format), you can zip and email it to leo@gpsoft.com.au and I'll take a look. The log will be large but will compress to a small size.

Default toolbars. The slowdown is when Dopus first starts up. It is opening the Downloads folder under Libraries. The folder tree is open or closed. Dopus comes up with the folder tree but the list of files and folders in Downloads is what takes like 2 minutes to populate. If I close the program and reopen it again, then the file list comes up almost instantly. But the first time after a restart it takes 2 minutes. With folder tree closed the program does not display, just a white bar under the icon until the folder list finally comes up.

Also it crashes on right click of a file name. As soon as I right click on Logfile.pml programs crashes. Crashes no matter what file I right click on. Restarts itself. This is consistent, any file name right click crashes program. Not sure if I did the right thing with ProcMon but I have emailed the logfile to leo.

So far, as I said, not impressed with version 12.

I checked my email but only got an email from you saying you couldn't send the file as it's too large.

You can use Dropbox or GoogleDrive or similar free services if you need a way to send a file larger than your email system allows.

Don't have Notepad++, Acronis, NOD32. Didn't have crashes with Dopus v10 before "upgrading" to V12. I am uploading file to Google Drive. Sending an email. I will look at shell extensions that are enabled.

I read thru the troubleshooting. Disabled a few shell extensions but there are too many to really deal with without some assistance. Cannot find the below menu item in the Preferences any longer: Where has this gone. I can try that to see what happens.

If you need the crash fixed immediately you can usually just turn on:

Found that menu item in the Pro version menu. Turned it on. Dopus no longer crashes on right click. Still VERY slow to start the first time after a restart.

It's being caused by your anti-virus, which is making just opening (not reading any data) each .exe installer in your downloads folder take up to half a second or more per .exe file. Some even more: 6 seconds for one I saw, 4 seconds for another. Normally a file open would take a few milliseconds.

The anti-virus scanner must be (re-)scanning all the installers every time anything accesses them.

If you go to Preferences / Zip & Other Archives / Zip Files in Opus then you can remove .exe from the zip extensions, which will prevent Opus from looking at exe files to see if they are self-extracting zips. That may speed things up, if there isn't a way to configure the antivirus to avoid re-scanning things it has (presumably) already scanned. (If you have the Description column on, then that can also cause .exe files to be opened to inspect their headers, which could also trigger the same delays due to the anti-virus scanner. Simply reading the icons from the files can also cause the problem, as well. You may see the icons take a while to appear in Explorer as well, if that's happening.)

This is a known issue with Microsoft's virus scanner. It both takes a long time to scan installer executables and it fails to record that it has already scanned them, so it keeps scanning them on every access. 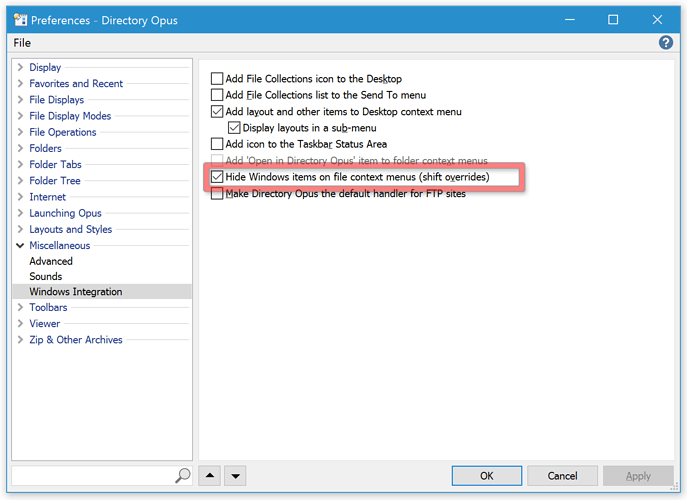 If turning that on fixes the crash then the crash was coming from a shell extension. The troubleshooting steps in the guide's Finding The Culprit section can help find which one.

Thanks for all your help but I give up. I removed version 12 and reinstalled version 10. For whatever reason(s) version 10 just works fine. No right click crashes even with file context windows items not hidden (no check mark), no slow startup even with exe included in zip extensions. Not sure what changed from 10 to 12 but I might as well stick with what works.

I did try hide windows items on context menus in V12 and it stopped crashing (for awhile). Then I removed the exe from the zip extension and it did load faster, although not as fast as v10. After removing the exe there were several reboots for other things and then it started crashing on right click again. So I gave up. No need to spend $$ to get a buggier version.

If the original poster is still reading, see Delay related to Windows Defender which may or may not be relevant.

If you want a quick fix and to not spend time on the workarounds suggested above, you'd be better off switching to a better anti-virus. It's the anti-virus that's the actual cause of the problems. The log showed it adding extremely large, sometimes several seconds, delays per-file, every time anything looks at an .exe installer file, even when they haven't changed, and even when the files are opened as data (not for execution) and just to read a few bytes out of them.

The antivirus will cause other things to slow down as well, no doubt. Good ones don't add such extreme delays, except sometimes the first time a new file is scanned (or once more after a major virus definitions update).

Microsoft's anti-virus was getting pretty good for a while, but then they seemed to somewhat de-prioritize it, and this problem has been around for years and affects more than just Opus.

I don't think Opus 10 supported extracting self-extracting zip files, which is probably why it wasn't triggering the antivirus's ill behavior, but the suggestions I made in my post above tell you how to make Opus 12 do the same. No reason to throw out the entire new version because one new feature triggers a problem in Microsoft's anti-virus.

The right-click crash is not a bug in Opus either; it is a bug in a shell extension you have installed, otherwise turning off the option to avoid 3rd party context menus would not have fixed the crash.

It's your computer so you can do whatever you want, of course, and stay on old software if it works better and you don't want to troubleshoot problems caused by other software, but neither problem is actually caused by Opus here. Such are the complexities of interacting software.

Hi, I was experiencing ~30s startups as well... in my case I tracked down the issue to be due to me having old network folders pinned to 'Quick Access'.... removing these non-existent folders sped startup nicely.... thought I'd share in case others are seeing the same thing... I'm enjoying the software so far, thanks!