Very slow to launch with many files in recycle bin

Since upgrading from a fully working Version 11 to Version 12 (currently Pro Edition 12.3.3 (beta) x64), I have faced the daily annoyance of having to wait in excess of 7 minutes (yes, minutes) for Directory Opus to launch after a restart of Windows 10.

I have recently tried to check what is going on using Process Monitor and see that DOpus is spending this time reading every file (and there were many) in my Recycle Bin.

I have now permanently deleted the contents of the Recycle Bin and the problem has been cured, presumably until there is another build-up of files in the Recycle Bin.

In settings, DOpus is set to "Replace Explorer for all file system folders (recommended)". The Recycle Bin is not set as a default folder when a new lister opens, so I cannot see why there should be this reading of the Recycle Bin contents on launch. Is there any explanation and will the problem return as the Recycle Bin refills?

Thank you for your response.

I've had this issue too. Same symptoms; Directory Opus was taking about 30s to start up. I didn't find this thread at first but found another one recommending using process monitor to diagnose. Found that DOpus was trying to access tons of files in the Recycle Bin.

It should be pretty easy to reproduce: just create say 10000 files, delete them to the recycle bin, restart and try opening Directory Opus.

I can't reproduce it here. But from your description it sounds like it's WIndows Defender, not Opus that's causing it on your system.

If you disable Windows Defender does it solve the problem?

Thanks for the quick reply and sorry I didn't get back to you until now.

With Windows Defender disabled, the startup time is significantly reduced, but the problem doesn't go away.

The problem is that Opus is scanning through all files in the Recycle Bin on startup (only in the first time starting after a restart), and I don't know why it needs to do this. Each time it tries to read a file, Windows Defender is "checking up" on it, causing more delay. But even with Defender disabled, this behaviour causes a significant startup delay, given enough files in the Recycle Bin. 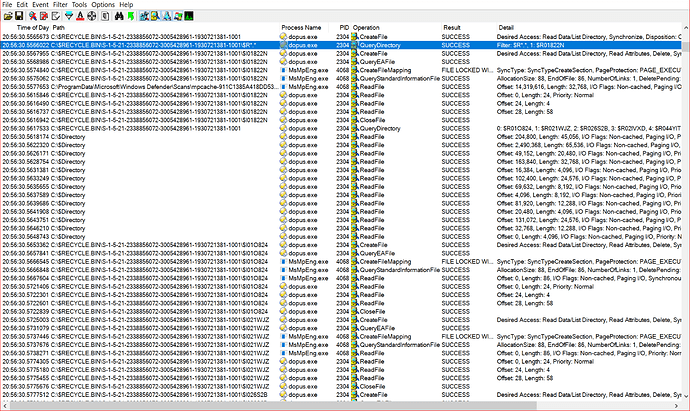 The logs show that Opus is just calling SHQueryRecycleBin which returns two numbers, the number of items in the Recycle Bin and their total size (SHQUERYBINFO). 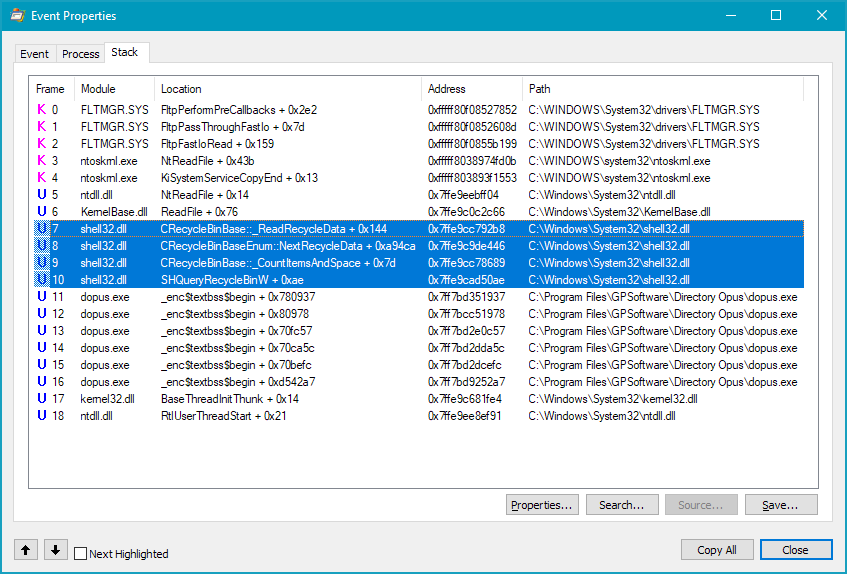 That should not normally cause much disk access or take much time, but I guess could if there is a really, really large number of files in the Recycle Bin.

It could also indicate that the Recycle Bin is corrupted in some way, which happens sometimes. Deleting the hidden C:\$Recycler or $Recycle.Bin (or similar; it varies depending on the OS version which formatted the drive) folder and then telling Windows to repair the Recycle Bin the next time you delete something to it may fix things.

Ok I see you're right, and I saw the same behaviour in a test program I created that just called SHQueryRecycleBin. I find it a bit weird that that API is so inefficient, and of course that Windows Defender slows it down so much is pretty silly.

Deleting the recycle bin folder didn't help, though adding an exception to dopus.exe in Windows Defender has.

Glad that has helped a bit at least.

Windows Defender really is trash, to be honest. It is a shame Microsoft let it get into the state it is now in, and that they still bundle it with the OS, making so many people use it without knowing it's the cause of problems, while harming the market for alternatives.