Since I updated to 12.12 a week ago, there has been introduced a bug/flaw that conflicts with windowed borderless games. I have a multi monitor setup.

Whenever I double click a directory to enter it, the Windows taskbar will flicker maybe 5-6-7 times super quick, indicating that the borderless game window was brought into - and out of - focus several times. This bogs down the system quit a lot every time I want to enter a directory in DOpus while having a game running. Needless to say this is driving me nuts and is incredibly annoying because of the distraction and slow-down it causes.

I have not touched a single setting in DOpus in maybe half a year or so, so I am 100% certain it's nothing I've done myself.

I've tried quitting all programs, just having Steam, a game running, and DOpus. Same problem.
I do not have this problem in i.e. Windows Explorer.

Have you introduced something new in any of the last versions since maybe two months back that is causing this? I dont update frequently, so I dont know exactly what version I had beforehand, but it's maybe two months since last time I updated.

I don't think anything that could cause that changed in 12.12. Are you sure nothing else changed on the system? Is it the same game that had no issues before 12.12, or a new one?

Try disabling Preferences / Display / Transition Animations, as that is probably what's triggering whatever is going wrong, but I don't know why it would cause the game to respond in that way in any normal situation.

As far as I can tell, I have this problem in all games running in borderless windows mode (I've checked with 6-7 games).

Disabling transition anims did not help.
I am seeing this problem when navigating to new folder, even when using back/forward/up - even when using keyboard shortcuts. It's also happening when a new DOpus Lister window opens. My default lister is My Computer, and this probably causes the most flickering of all directories.

Perhaps what is happening is that it is moving the focus to the Windows task bar? And it's not actually removing the focus from the game at all? But the system wants to keep the game on top, and this results in flickering?

As a note; deleting the entire configuration makes the flickering go away. But this is not really a viable solution... I don't want to spend hours sifting through the configuration trying to locate the one setting that is causing this. So I am now quite positive there is something in the newest update that's the root cause of this.

For reference, there are no Script Addins.

Further info: I also noticed this problem happens when I resize any DOpus lister window. (It does not happen when I resize the config window)

I have installed the old version 12.10 and it does not have this problem.

Reinstalled 12.12 again, and problem was back.

I'm using v12.10 for now until you have this resolved. Let me know if you need more information.

Could you test with 12.11 to see what happens with that? That may narrow things down a bit farther.

But as far as I can think, there are no changes in 12.11 or 12.12 which should affect this, and if transition animations are turned off there isn't anything that happens when double-clicking a folder which should affect what a game or the taskbar does.

I haven't been able to reproduce the problem so far either.

Sorry for taking long to reply.

Note that this isn't only when double clicking a folder. It's also whenever a new lister window opens, or very often when a lister window is resized (but not all the time, as it seems to be related to showing/rendering/refresing the actual files and folders shown in the window).

I have this problem even if I quit every single program running, including shutting down some non-essential background services. Only program running will then be Steam because it's required to be able to launch the programs.

What happens if you temporarily uninstall DisplayFusion (and anything similar that affects how/where windows open) and reboot? Do you still see the issue?

Is WindowBlinds or anything similar which patches look & feel installed?

There's one change in 12.11 that seems vaguely related but I think it would only cause problems if it's triggering an issue in a tool like either of those (which would explain why no one else is seeing/reporting the same thing).

I've had time to do a test now with a similar setup. Many thanks for all the details above.

Here's how I had things configured: 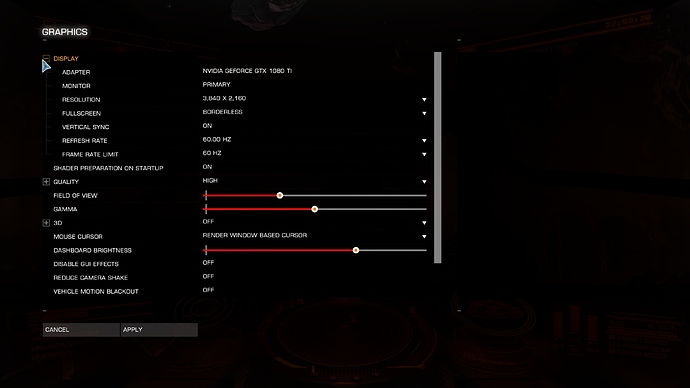 (I tried all three mouse cursor settings in case they were somehow related, but they didn't seem to matter.)

Video where I open Opus windows on both monitors and change folders in them:

As you can see there, no problems with flickering.

Windows were opened by double-clicking the desktop on the left (secondary) monitor.

Re DisplayFusion and similar tools, you typically have to uninstall them and reboot to remove them entirely. Just closing down the front-end part of them won't always render them inert.

It's not definite that it is DF or anything similar, but it's the first thing I would rule out myself.

The Opus update checker might be displaying a notification, which could appear on top of the game (depending on Windows notification settings).

I have noticed that notifications, even ones for achievements triggered by the games themselves, can cause some games to flicker multiple times as the notifications appear and disappear lately. That seemed like a new OS-level bug in a recent Windows 10 update, or perhaps a recent NVidia driver. I noticed it with Forza Horizon 4 recently and its own achievement popups. (No involvement from Opus there at all, but it could be the same underlying problem in the OS/driver. I'm sure notification popups did not do that until recently, as Forza Horizon 3 triggered them frequently and did not ever flicker like that. I don't know if it relates to what you're seeing as there's also no reason Opus would be showing you notifications when just changing folders, and presumably you'd notice the notifications appearing if it was.)

I noticed one thing.

If I absolutely hammer the first ">" menu in the path field in Opus on a secondary monitor, the taskbar would occasionally flash over the game on the primary monitor for a split second. No long delays, but it was appearing. Maybe that in conjunction with something else on your system was triggering the delays you were seeing. 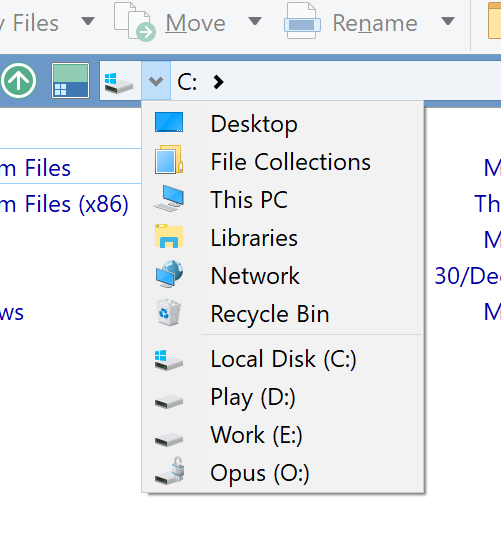 Were you navigating using that menu, or a similar menu, rather than double-clicking on folders or the folder tree?

We've made a change which stops the taskbar appearing/flashing when that menu is used. The same code is also called when a new window is opened, but is not normally called when changing folders via double-click or the folder tree. So I don't know if it explains some of what you were seeing or not.

The change will be in the next beta (12.12.3). Hopefully it will fix what you're seeing, but we can't be sure as it's not happening here. Please let us know once the beta is out and you've had a chance to try it.

I've completely uninstalled both DisplayFusion and Classic Start Menu, and did a reboot. It does nothing to improve the problem.

Here is a short video deomonstrating both changing folders and resizing of a lister window (I am not using the > navigation menu in the path field at all):

In your video, it looks like it's also happening when resizing the window. Is that correct or was it still reacting to the previous trigger or something else happening?

If you want to, you could make a config backup (Settings > Backup & Restore) and send it via private message (don't post it in public, in case the config contains anything private) for us to see if we can repro what you're seeing with your config and work out which setting is causing it.

I'm hoping the change I've made for the next update will fix things, either way, but getting a better understanding of what's causing it wouldn't be a bad thing.

Alright, I have sent you the config file in a PM.

And yes - for the third time

Also, in case you missed this detail: it happens with ANY fullscreen (borderless windowed) application. For example Faststone Image Viewer.

Thanks for the config file. I'm trying some tests with it.

Sorry re not remembering the resizing detail; it's difficult keeping every detail of every long thread in my head for days.

The resizing thing is quite odd. Does it also happen if you just activate and deactivate the window, clicking on another window on the same (secondary) monitor?

Are any Opus windows / toolbars / etc. open on the primary monitor that the game is on? The taskbar comes to the front if another window from the active application is on top of the game window on the same monitor, as far as I can tell.

(There was a change in 12.11 which meant Opus creates a dummy, invisible window on the primary monitor to measure something when it does certain things, usually to do with positioning new windows so they don't go off-screen. That potentially accounts for what you're seeing, but it's not code that is normally called for some of the things that seem to be triggering it.)

After a quick look at the config:

Edit: Don't worry about that. Your config revealed another bug to do with those things, which I've fixed for the next update, but it was only cosmetic.

Looking into something else in your config now, and will update the thread shortly.

I see what's going wrong now. The config was very helpful, and let us find two separate bugs. Many thanks for sending it.

Many thanks again, and also for trying all the things I asked.

Thanks again for your help.