If you find issues feel free to report them now.

(Although we wouldn't recommend rushing into a new OS version, especially one with so few upsides and which has clearly been rushed and released unfinished with major features not present in the initial release.

Yeah, I'm not ready to upgrade to it just yet, but I want to know that Opus is ready for it. After using Opus ever since the Amiga days, I cant imagine going back to Windows Explorer. Haha

Working with DO on Win11 around 2 months on PC and Surface Pro. No critical issues found.

No critical issues here – Windows 11 landed on my spare PC last week – but an annoying minor niggle. (One of many on the UI front.)

Right click on desk top does not show the usual DO options, my usual way into "Lister Layout". Instead there is a new menu that requires me to drill down with "Show More Options". 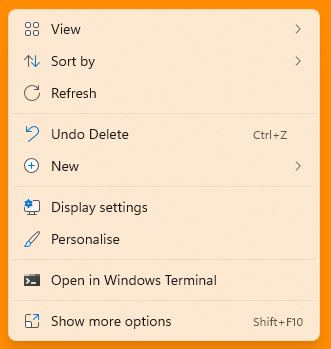 I have looked for ways of bypassing this intermediate stage. No luck so far.

Right click on desk top does not show the usual DO options, my usual way into "Lister Layout". Instead there is a new menu that requires me to drill down with "Show More Options".

That's something Microsoft chose to do to all existing third-party context menu items (and probably some of their own as well).

It's their way of tidying-up the mess that the menus became by simply hiding everything anyone else adds by default, and then waiting for developers to implement a new API in order to get their items back into the top level of the menu, at which point it will be a big mess again. Not sure what the long term thinking is on that.

A good reason for leaving my main PC on Windows 10 until the dust settles.

There's a registry edit to get the full right-click menu back:

How to get Old Right-click Context Menu back on Windows 11 (thewindowsclub.com)

So many more issues coming to light, several big ones that are new to me in this video, and not just affecting gaming.

Really have to wonder why MS released this so early when it isn't ready (in terms of headline features being present, and bugs) and no one was asking for it. I suppose they wanted it to drive hardware sales over Christmas.

Hello, running DO on W11 since july = no problem so far except only one lol. when right clicking on a file in DO, my onedrive context menu disapeared. can't share a file anymore.
i must go in windows explorer (lol) and use their new menu to do it. Any idea ? in DO , the old windows 10 menu is there, it's not the "new one" by the way. (but pretty sure it's normal if DO doesn't support it yet). If i can have my onedrive entry back in the menu i'll be happy, i don't ask more ahah

(Windows 11 issues are all tagged, so they're easy to find.)