I've just installed the latest 12.9.1 beta and as I have an iPhone which supports HEIC, I thought I would set DOpus up to view these files. However, I cannot view these files on my system.

I have installed the HEIF Image Extensions app (as suggested by the Win 10 Photos App) from the Windows Store but that doesn't seem to work.

In the DOpus Viewer pane, I see the following: 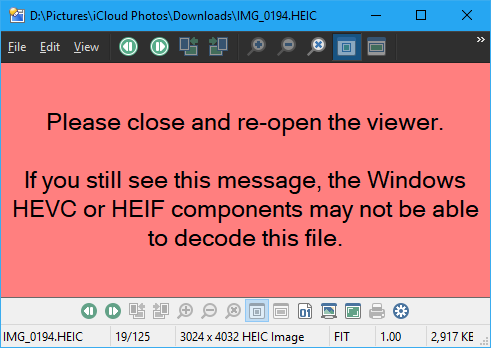 Obviously, I have closed and re-opened the viewer ( I even rebooted) but to no avail.

I then Google'd for a suitable codec and was pointed towards CopyTransHEICforWindows which claims to open/view HEIC files. That didn't work, either in DOpus or Explorer.

I then downloaded wic_x64_enu but that won't even install. When run as a normal user (with Admin rights):

When run via Run as Administrator:

So my question is, which codec(s) should we be downloading in order to view HEIC files in Explorer/DOpus please?

I have installed the HEIF Image Extensions app (as suggested by the Win 10 Photos App) from the Windows Store but that doesn't seem to work.

Was it working in the Windows Photos app?

You may also need the HEVC extensions from the Microsoft Store as well, if they aren't already installed.

I then Google'd for a suitable codec and was pointed towards CopyTransHEICforWindows which claims to open/view HEIC files. That didn't work, either in DOpus or Explorer.

We haven't tested with that codec yet so I don't know if it will work as a replacement. (It's on our list to look at, since it may give Windows 7 users a way to view HEIC/HEIF files.)

Another thing: Make sure your files have .heic extension. The codec will not open files with the .heif extension in my experience.

In case the problem is the file itself, here's a test file that works on my system:

Was it working in the Windows Photos app?

No. I've just moved some .heic files into a separate folder to get them away from the .jpg copies and I cannot view them at all.

You may also need the HEVC extensions from the Microsoft Store as well, if they aren't already installed.

OK, I've just spent the princely sum of £0.79 to buy the HEVC Video Extensions and now everything seems to be OK now.

Seems strange that Microsoft would supply the heif/heic codec for free but not the hevc codec. Also why would you need both if the pictures are 'plain' .heic files?

Thanks for the quick reply Leo.

I didn't need to pay for the HEVC part FWIW. May depend on Windows version, perhaps. I think HEVC was preinstalled for me but I may be wrong.

HEVC is the compression that HEIF typically uses. The HEIF part just handles the container the compressed data is in, I think. More a demuxer than a codec.

For reference, next version of CopyTrans HEIC should support the .heif extension as well.

CopyTrans HEIC however doesn't provide any HEVC support, as it's primarily intended as an image codec. On my Win7 system, I have HEVC support (x265 actually) through the popular K-Lite pack, but I'm not sure if the codec is presented as a WIC or a DirectShow component.

Windows Photo Viewer can display HEIF/HEIC files (with CopyTrans installed), so hopefully Opus will be able to do the same at some point.

There are two HEVC codecs in the microsoft store:

The first one is free. Don't know if there are (technical) differences.

The first one is free. Don't know the (technical) differences.

Whether or not that is true is another matter.

Support for the CopyTrans HEIC decoder will be added in 12.9.2, enabling HEIC/HEIF viewing on Windows 7 and up.

I don't know if it will help in this case, if you're having problems installing CopyTrans at all.

Also note that it's up to Windows (and the way the codecs are registered) which codec it uses if both are installed, so you probably only want to install one or the other. I found the Microsoft one worked on one image that the CopyTrans one didn't, but that may be true in the other direction as well; my collection of test images is small, and there are a bunch that neither codec can handle, as the image format is in its infancy.

On Windows 10 with the official codecs, I'm also now somewhat confused myself as to what you actually need.

I definitely have HEIF Image Extensions (free) installed, and needed that.

As I remember it, when I first looked I already had HEVC Video Extensions installed, and had never paid for it. (I don't know if it was pre-installed or something I installed months ago, but I'm pretty sure I didn't pay for it, even if it was just £0.79.)

But when I look today, HEVC Video Extensions costs £0.79 and says it is not installed. Maybe I imagined it being installed, and it never was, and it isn't really required (even thought MS say it is)? It's a bit strange. 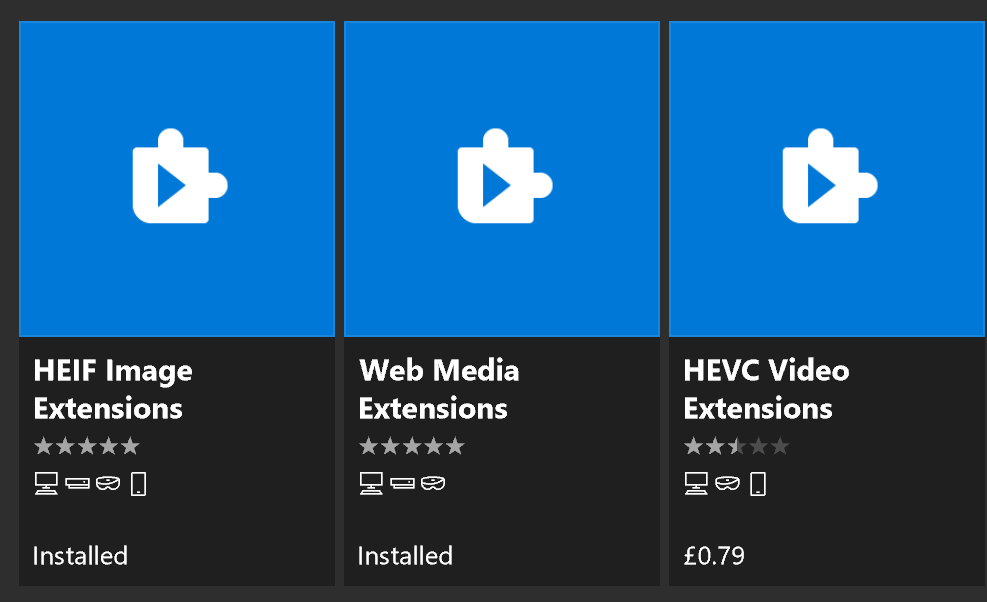 It doesn't seem to be required, as HEVC decoding is working for me with only these things installed via the Microsoft Store (which is so awful I avoid it unless there's no other choice):

(only HEIF Image Extensions seems relevant, but here's the complete list in case there's a weird dependency somewhere; e.g. maybe one of the games needs and installs the HEVC decoder via another method, or something) 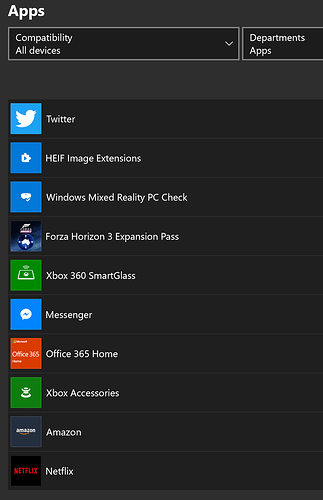 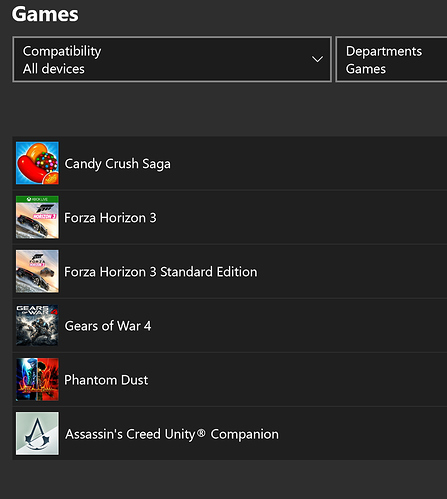 (I'm not convinced the "My Library" list is actually complete, though, as it is missing the Web Media Extensions app which the store says is installed in the earlier screenshot, but does not list anywhere. The Microsoft Store is a piece of absolute ****.)

The Downloads & Updates section shows yet another different list of apps, but only shows the 10 most recently updated ones: 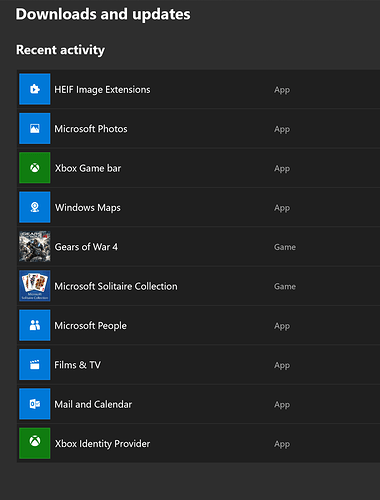 And yet, if I look under the main Windows > Settings > Apps and filter on extension, there is HEVC VIdeo Extensions from the Device Manufacturer. So it is installed. But no longer visible in the Microsoft Store. 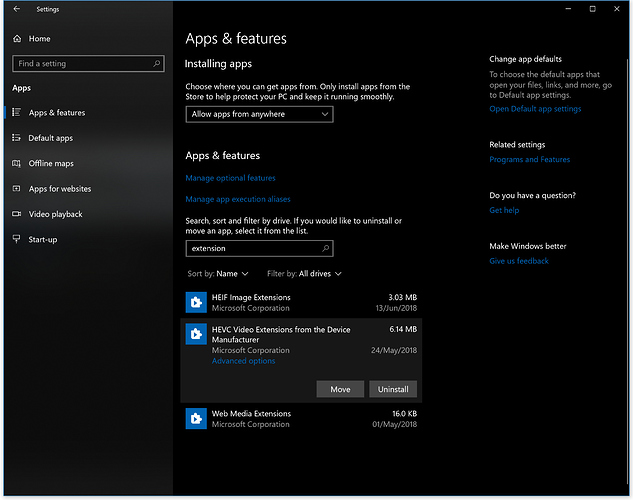 (I'm not sure who "From the Device Manufacturer" refers to. I made the PC myself and installed a retail version of Windows 10 Pro. It could also mean NVidia if by "Device" it means the GPU, which I think can decode HEVC.)

God knows. Microsoft have made a mess of this.

You could try uninstalling the Microsoft codec and using the CopyTrans one, if you can get it to install.

Additional observation: With CopyTrans, the viewer plugin in Opus did not work until I opened an image in the Windows Photos app, then waited a few seconds and tried again in Opus. It seemed like that activated something which didn't happen from just installing the codec.