i have added the convert command to the context menu of all image files, but often, i keep the original files, and move the new versions someplace else. i was thinking it would be handy to add a "convert here" command to the drop menu of image files that would convert them to the drop target - something that would pop up the convert dialog with the drop target as the destination for the copied files.

You can. See the screenshot below.

With commends in the drop menu, the directory you have dropped on to is considered the destination. Commands which put their results in the destination (like Copy and Convert, unless the HERE or TO arguments are added) will automatically do the right thing. 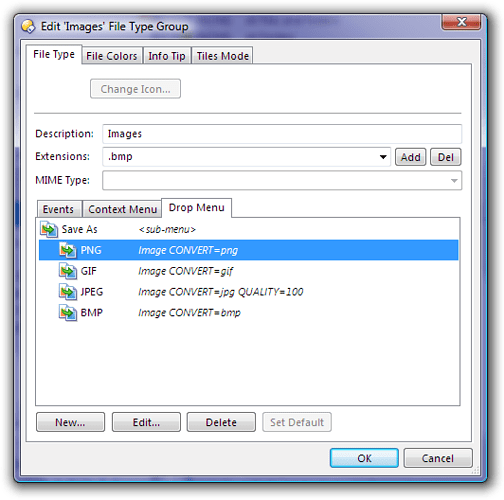 does this work with the convert dialog though?

i tried adding "image CONVERT" to the drop menu, but the converted image does not end up in the destination lister...

Was the menu displayed for you to choose CONVERT? If not, then per the Drag and Drop section in the Help file..

If you drag with the right mouse button and drop over an Opus Lister, the drag and drop menu is displayed.

[quote="newguy"]does this work with the convert dialog though?

i tried adding "image CONVERT" to the drop menu, but the converted image does not end up in the destination lister...[/quote]
That seems wrong to me. I've reported it to GPSoftware.

If you're just interested in choosing the image format then you can work around it using this command:

If you also want to rotate or resize then you could add more {dlgchoose} things there but it would probably be quite tedious to use compared to converting the image in-place using the dialog and then moving it afterwards.

with that checked, it works. but it seems there ought to be a way to call this using a command, so that a "convert here" option on a drop menu would work. for me, drag-drop is still far more intuitive than source/destination. i still use drag-drop for all file manipulation, even though it can be done with buttons/hotkeys in Opus.

Good catch. I overlooked that checkbox.

Yeah, there probably should be a way to turn that checkbox on, or disable it completely, via the command for scenarios where you always want stuff to go to a particular place.

Perhaps if you explicitly specify a TO folder on the command then the checkbox should be disabled:

(Right now that does the same as a basic Image CONVERT.)

yes that would be handy. i suppose if you've already mentioned this to GPSoftware they'll look at it eventually

until then i've done some experimenting and it seems Convert remembers the last setting used as far as that checkbox goes, so i can keep it on 'write to destination' and it will pretty much do what i want...