After update no more file copy/move

After update, I cannot use the software anymore.
When I want to move a file from one folder to another, the answer is
Access is denied. (5)
When I want to copy from outside, e.g. from Outlook, it says
The system cannot find the file specified. (2)

When I use MS File Explorer everything works.

My guess is your antivirus is blocking things, but not telling you, due to our code-signing certificate being renewed, and it not seeing the new one enough yet to trust it.

If you disable your antivirus, do things work then?

Yes. When I disable the WIN10-built-in protection, it works. But such solution is not acceptable.

Then that antivirus is frankly garbage. If it thinks Opus or something Opus is doing is suspicious, it should tell you, not just break things and leave you (and us) to work out why. If there really was malware on your system, you still would not know, because it hasn't warned you. And there is nothing suspicious about what Opus is doing, so it shouldn't be blocking things in the first place.

If your antivirus is breaking software, the issue is with the antivirus (or its configuration). You should complain to the antivirus vendor, and/or change to something better. (As an example, ESET/NOD32 has never caused a problem like this.)

The issue may go away as the new signatures becomes more "trusted", but the unacceptable thing here is the antivirus, not anything Opus is doing. Opus can't function correctly if antivirus is breaking the operating system.

I would like to add that im using the latest WIN10 x64 (2004 19041.572) and i did not experience such issues. Updated DOPUS from the latest beta to 12.22 and windows defender or whatever its called did not block any of the DOPUS functions.

It may depend on the Defender configuration and/or the contents of the files being copied.

A lot of "privacy" options in antivirus will block software (other than File Explorer) from opening files that contain things like your email address or numbers that look like a credit card.

(Allowing Explorer through makes the whole protection somewhat pointless, since anything that wanted to could easily trigger the copy inside of explorer.exe via various well-known methods.)

You can usually whitelist Opus, but you may also need to whitelist any other software that deals with those files. And it can block files being opened that don't really contain any private data; just things that look similar. The whole concept causes more problems than it solves, in my opinion, but we have no control over it. We ask to open a file; antivirus may intervene and fail the request, and all we can do is report that it failed.

You need to do one of:

We have no control over what Defender does, so we cannot change any of this. The only relevant thing which changed in Opus between the updates is that our code-signing signature was renewed, which happens every three years. (This is normal. Signatures expire and have to be renewed regularly.)

I would like to add that im using the latest WIN10 x64 (2004 19041.572) and i did not experience such issues. Updated DOPUS from the latest beta to 12.22 and windows defender or whatever its called did not block any of the DOPUS functions.

Me too. I know this doesn't help much. I guess I'm just trying to say that this doesn't seem to be a common problem.

Maybe take it to some forum more closely related to Windows and Windows Defender. 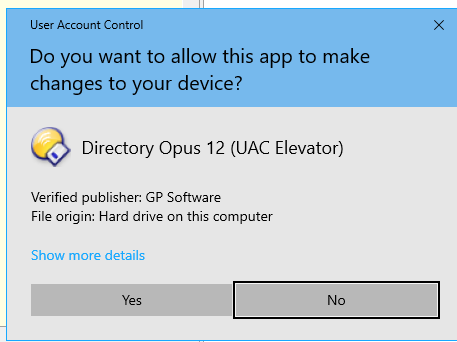 Is it caused by UAC?

Is it caused by UAC?

You said earlier that the problem goes away if you disable Defender:

When I disable the WIN10-built-in protection, it works.

So we already know the problem cause: Defender (or the way Defender is configured).

This may be relevant:

I was not aware of Windows Defender's built in Ransomware protection! However the first problem I have encountered is that my games can't access the documents folder to grab the save file/game settings etc! It is a great idea but seems very...

I looked to the link. I don't understand, I am just a user, not IT guy.
Now, I wanted to install a new folder - not possible.
Blame defender for it?

I just can say - I paid for dopus and it worked very well. I made an update. Now I cannot use it anymore and waste my time finding a solution.

But sticking with 12.21 for the time being is not an option?

Blame defender for it?

That depends on whether that problem still happens if Defender is disabled, and if the same action works in Explorer or other software or not.

If disabling Defender makes things work again, which you said was the case with your first problem at least, then Defender is the cause.

Whether that's the case for this second issue, I can't say, but you can easily test that yourself by disabling Defender again.

Given you already know Defender is causing one problem, checking if it's causing another problem seems like a good idea.

We don't make Defender and cannot help much if Defender is breaking the operating system by making requests to do things fail.

If Defender is causing one or both problems then you need to ask the people who make Defender for help, or switch to a better antivirus that doesn't cause random problems.

Defender is blatantly the cause of your first issue, since the problem stopped when you disabled Defender. You can keep posting here in the hope that reality will change and some other solution will appear by magic, but it's not likely. Changing to another antivirus or asking experts in Defender for advice on how to stop it breaking things would be a better use of your time if you want to solve the problem.

We know that Defender is made by Microsoft and their support people are not very helpful, but that doesn't mean we can solve their problems. If they can't support you when their antivirus causes problems, then use an antivirus from a better company.

We cannot solve problems here, or by modifying Opus, that are caused by antivirus that breaks Windows and blocks Opus from doing things which should otherwise work.

I deleted and reinstalled the software. And I whitelisted it in the WIN Firewall. No it works - no problems anymore.