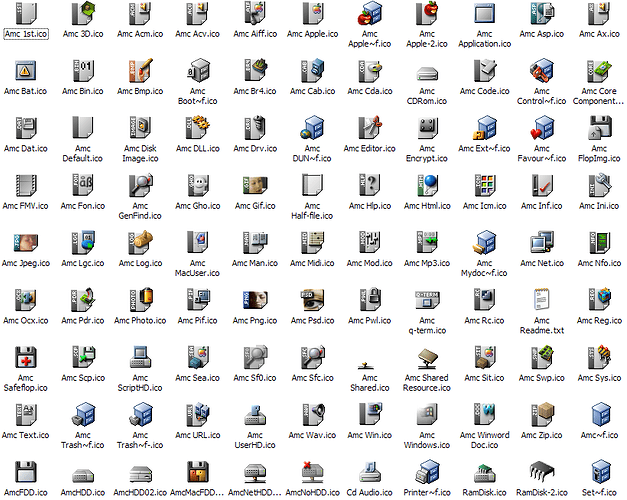 [Admin clarification: This is an Icon Set, not a Font Set. --Leo]

I took the liberty and created a Font Set out of these Icons. So See the attacked zip file. Extract "Amigan.dis "and import into DIrOpus9 as normal (Settings --> Preferences --> Toolbar Icons --> Import (Alt + M)).

Anyone else that has some NICE Amiga icons/iconsets/tolbars etc... I would love to see them. I still run my Amiga 2000 in emulation - I still use DirOpus 4 (last version I bought). Anyone know how to create scrollable button banks like in the old Amiga Opus?

The only way creating button-toolbars like in DO4 is creating normal toolbars without icons (just text) and set the buttons-size all the same. But I think you won't get "real" DO4-feeling, because you need to create a toolbar for each row and a as far as I know the length per button is set by the longest text each toolbar. So you don't have the "grid"-look.

I donwloaded and installed the package (thanks to you both...), because I'm a sucker for everything retro, but I don't see any difference... am I doing something wrong? Or have I misunderstood something?

I donwloaded and installed the package (thanks to you both...), because I'm a sucker for everything retro, but I don't see any difference... am I doing something wrong? Or have I misunderstood something?

The icon set in GabrielTSS's post does not override any of the default icons; instead, it adds new icons beside the default ones.

So to use them you need to edit your toolbar buttons individually to change the images they use. (The new icons will appear in icon chooser.)

Hmmm... thanks for your reply. I don't see any options to change the buttons icons,I'll keep on looking.

But, seeing as there were document icons I was hoping maybe DO would use them to display the actual files with those icons, overriding the windows default ones. As you can see, I've never toyed with icons in DOpus before

If you want to change system file-type icons you can use Settings -> File Types within Opus. (Or any other file-type icon editing tool.)

Sorry if I don't have everything just right with these. This was my first attempt at doing this. I have been using DO for a while now and never really delved deep into customizing it. Under the Amiga version I use to customize the heck out of it. I'm still trying to learn how to do all of this in the PC version of DO.

Sorry if I don't have everything just right with these. This was my first attempt at doing this.

Don't worry! Most of these icons are for new purposes, not replacements of existing toolbar icons, so the way you've done it is right. Icon Sets don't have to replace existing icons; they can just add new ones like this one does.

Saying that, it can actually be more efficient to use normal, external .ico files if you just want to add a few of them to your toolbars. Having lots of icon sets can slow-down Opus start-up time as (at least currently) all the icons get processed whether you use them or not. It's also less efficient to store individual image/icon files within the .dis (instead of turning them into a single PNG file with all the icons together) since each image has to be extracted and loaded into memory instead of doing them all in one go... BUT, if it makes things more convenient then that's a trade-off. Just wanted to mention it so you know the pros & cons.

It's a fantastic icon set, no need to apologise for anything!!

After seeing how it works I wish you could set an icon set to replace the normal system icons. But maybe this would insert too much overhead...

There are tools for replacing the system file type icons. If Opus's file type editor doesn't do it for you, get one of the many icon editor / icon library tools.

Yeah, I know, IconPackager being one. But you need a specifically-built package for those...