Started having problems with the BACK/FORWAD keys, sometimes they won't go back, sometimes only back 1 level and sometimes opens current folder in new tab?
my keys look like this any idea what the problem might be 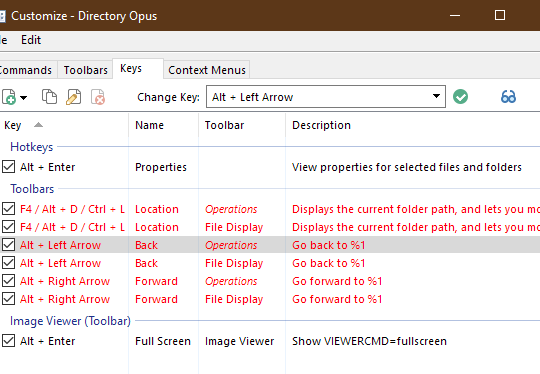 Are you using Alt + Left Arrow to go back, or something else? Keyboards/mice with an actual Back button usually send something different.

Your screenshot indicates a problem in that you have the same commands with the same hotkeys in multiple toolbars. You should remove or turn off the hotkeys (if not the duplicate commands) from one of your toolbars so nothing is red.

thanks,yes i have been copying original buttons. turning off one of the conflicts fixed it.

Update: There is a bug, it's only been apparent since the last update I think,
I have 2 FDB toolbars set up, only one can be on at a time as there is a button on both which hides the other. If I turn one of the conflicts off in Keymaps then the BACK (I use scroll wheel left/right for back & forward) will only work when that toolbar is showing. If I turn both back on in Keymaps then the problems as described above will happen if one of the toolbars is showing but will work OK if the other is showing. I repeat this has never been a problem before the last update. I did try setting system keys but then BACK/FORWARD do not work in my browser. I shall flag this as a bug for your attention.

ANOTHER UPDATE: not a bug on your side, everything back to normal now, just upgraded my mouse Logitech G903 because the last one G900 was so good, but I had to uninstall the G900 gaming software and install the new G903 software, I have just reverted and problem fixed, will be sending the mouse back! I shall unflag this as a Bug, sincere apologies.