Batch rename *and* copy or move the files in one go?

I am working with video and copy memory cards with video files to the hard drive. Each memory card is copied to a unique folder on the computer. Often i want to rename the files from let´s say Clip0001.MXF to A001_Japan_20170421.MXF. This can be done very easy with the Rename feature in Opus.

In Adobe Bridge i can batch rename files and at the same time copy or move them from the source folder to a selected destination folder. The neat thing here is that the files in the source folder is untouched, iow they are not renamed. The last thing may sound wierd, but sometimes it is great to have the original clips intact for future use.

Is there a way to achieve the same results using Opus, iow batch rename clips, copy them to a new folder, leaving the original files untouched and un-renamed?

Here is a screen dump from Adobe Bridge: 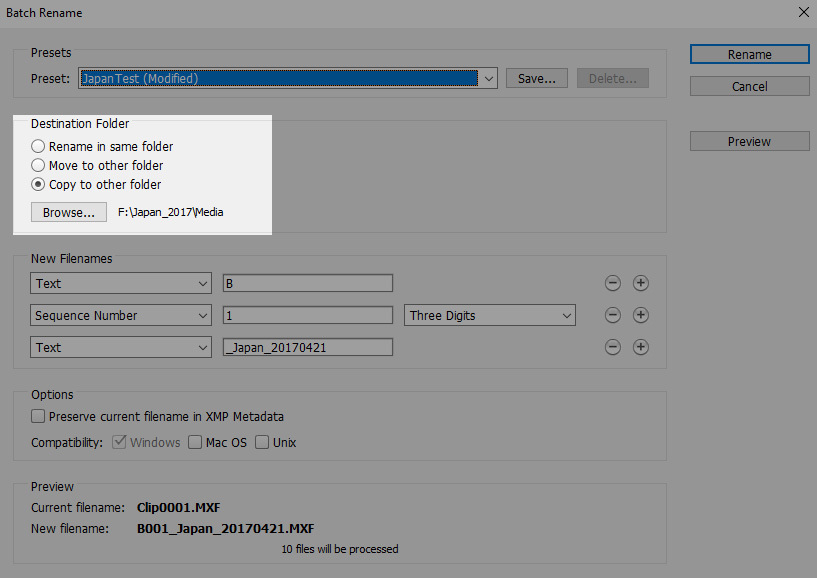 Here's on way to do the example specified: 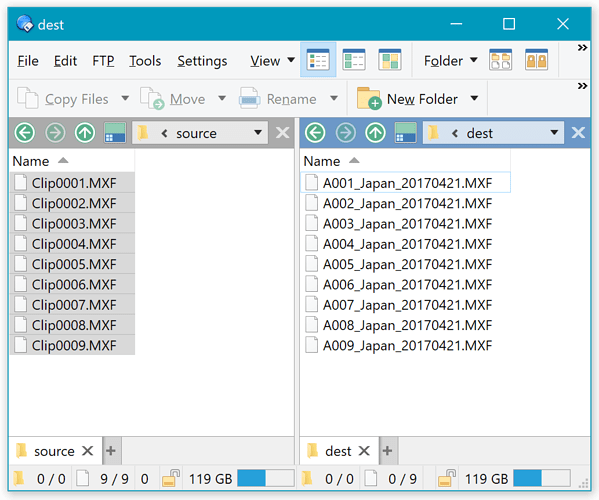 For me that kind of worked... (See the attched image for my result)

Apparently i don´t have the knowledge and i am back in Adobe Bridge since it is more convinient and it has preview of the result. I would be glad if a feature like that could be added in the Rename dialog in Opus though it can be done with the right knowledge in the Save As dialog.

I am not sure what happened there. What did you do with the command line above?

The command should go into a toolbar button, or a hotkey or menu item, to give you a button you can push to copy the files while renaming them in a special way.

See here for how to add commands from the forum to your toolbars:

For how to use Script Add-Ins, please see the reply to this post. This first post covers Buttons and Toolbars, and also applies to raw commands for things like standalone hotkeys. Buttons and toolbars can be shared in several different ways. (Much…

What did you do with the command line above?

I copied the text and pasted it into New name in the Save As dialog. (blushing slightly... )

I was not aware of the need to use it for a button. Will try again.

Leo, that worked as expected.

The problem i face now may be due to that i was not as clear when i started the thread. The button i create rename the files the way i want, but since i have several memory cards and with video files filmed on different days i need a way to edit the button easily. Easily as in not having to go to Settings > Customize Toolbars > Right click on the button > Edit > change the text in Function > Click OK > Click OK.

For example, in Adobe Bridge i press Ctrl+Shift+R to bring up the Batch Rename dialog with all values ready to edit directly.

That´s why i need a dialog i can bring up and just change what´s need to be changed. Edit a button each time feels to cumbersome especially since i use the video camera often, iow renaming files will be done often with different dates.

You can have Opus prompt you for how to rename the file.

If not, I'm not sure there is enough detail yet.

How would you want to specify the filenames/patterns, exactly?

Yes, that does exactly what i want and it is even better/more convinient than Adobe Bridge. The only downside is that if the source files are named RA1234.MXF nothing happens. But, that is easy enough to change so it´s really a minor downside. Now when i know what to change it´s easy.

It should be possible by changing the wildcard slightly, or using scripting if it came to it.

It's best to fully define what you want to do first, else we'll keep iterating instead of simply solving the whole problem at once. Some requirements may mean the problem is better solved in a completely different way, so iteration can waste a lot of time.

Leo, i am really happy with how it works today. I don´t use the camera that names files as RA1234.MXF so much anymore. I have files from it on my HDD but it was esy enough to manually change the wildcard to RA1*.MXF to make it work. Once i got the solution i am comfortable to edit it. Memories from MS DOS start to pop up after many years without using it.

For now i am happy and grateful for you help!