I select all the sub-directories, choose "Rename", then set up the dialogue as attached. Directory Opus does something, but doesn't rename any files. I've scanned the help files but can't see what I'm doing wrong. Any help would be greatly appreciated! 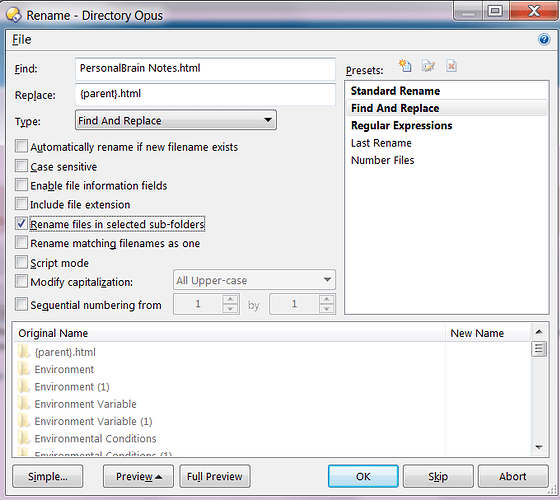 I think you just need to switch the Type to Standard Rename (since you're renaming based on the whole name, not just finding and replacing a sub-string inside the name), and turn on Enable file information fields (so that {parent} isn't used literally but instead turns into the parent folder name).

You can click on Full Preview to see what will happen without applying the rename, in case it's not what you want.

It looks like you have at least one folder there which is literally called {parent}.html from previous attempts, so you may have to clean up those files/folders so they have the right names again.

Thanks Leo, but that doesn't work for me. It just brings the dialogue back up with the name of the next sub-directory down on it, instead of batch renaming the files within the sub-directories.

Ah - on the third attempt this worked - thanks for that. I don't know if this dialogue is sensitive to the order in which parameters are added, or is buggy, but on my PC it does something different each time I try it with the same parameters given.

That's difficult to answer/explain without seeing what's happening each time. If you post some screenshots of what looks wrong and explain what you're doing & in which order, I can try.