Smart Favorites do not appear to be working for me. I am running the latest version of DOpus on Windows 7 (x64). The Smart Favorites option is enabled, but no favorites are actually populated in the smart favorites.

Did you check -> preferences -> favorites -> smart favorites, if the values are ok? The default folder threshold is 40, the lower ones have values between 3 & 10.

I have it enabled. What appears to happen is that smart favorites "clean out" every so often.

I am still experiencing this problem. A complete reinstall with default settings does not resolve the issue. Basically, every time I reboot it wipes out the Smart Favorites.

Does it still exist (with the same size/date/etc.) after a reboot?

Does its size/date ever change or is it "stuck?" (Maybe try deleting the file and restarting Opus to see if that fixes things. e.g. It could also be set to read-only which would prevent Opus from overwriting it.)

I'm trying to attach a screenshot of my Smart Favorite settings. 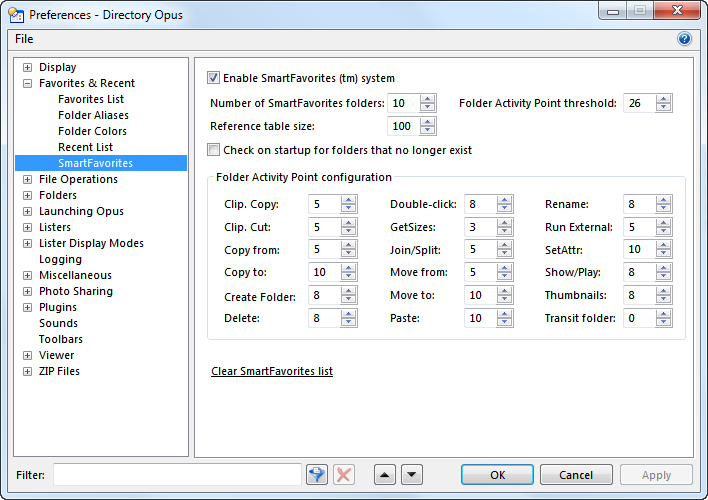 A few things to try:

That should tell us if it's a problem with Opus shutting down, Opus starting up, Opus being killed during a reboot before it can shut-down, or something to do with user-profile synching etc.

It appears to be a problem on reboot. When I exit Opus, the file remains intact (I can see from Windows Explorer). I unchecked Opus starting on startup, exited Opus and then rebooted. I looked at the smartfav.osf file and it was reduced to 0 bytes (i.e. blanked out). I had not started Opus, and it was intact (at 547 bytes) before re-boot.

Is your account using a roaming profile (i.e. one that syncs your settings files to a server on logon/logoff, usually used on corporate networks rather than at home)?

It may also be worth scanning the non-empty smartfav.osf with your virus scanner in case it's detecting a false-positive and wiping the file, or something like that.

Can't think why else a file would be wiped on reboot, other than a faulty filesystem or disk. (Running a disk check might be worthwhile.)

Just for completeness (ftg would know that surely), there are some other security applications, that could possibly cause this, like sandboxes or "freezing" suites, that reset the state of protected folders after everey reboot, there are plenty programs like that out there.

[quote="leo"]Is your account using a roaming profile (i.e. one that syncs your settings files to a server on logon/logoff, usually used on corporate networks rather than at home)?

It may also be worth scanning the non-empty smartfav.osf with your virus scanner in case it's detecting a false-positive and wiping the file, or something like that.

Can't think why else a file would be wiped on reboot, other than a faulty filesystem or disk. (Running a disk check might be worthwhile.)[/quote]
The account is using a roaming profile. By that, I mean that the ConfigFiles folder is located in:

I think that is likely because on initial install, I selected share settings for all users. Could that be part of the problem? How could I rectify that? Is there a way to have it stored in "local"?

Also, I ran my AV program on that folder, no results.

Sorry. One small change above - I had selected private configuration files, not shared. I tried changing this, but it did not stop the smart favorites blanking behavior.

If it's a standalone Windows install/account then it's probably not a roaming profile. (The folder is called "roaming" whether or not the profile actually is a roaming one.)

What happens if you copy the file to a few other places (e.g. your desktop) and then reboot? Do all the copies get wiped? Seems like something very odd is going on with the machine, either way.

It's a confusing problem, but if something is wiping out that file and Opus isn't even running, it's not an Opus problem. Something else on your machine is doing it - look at what you have installed (e.g. anti-virus, anti-spyware) and see if you can work it out.

It appears to be related to the PC shutdown. I have tested this on a completely clean install of Opus today. If I exit Opus (actually exit, not just close) the smart favorites do not blank on reboot. I tested it by a manual exit, and by selecting the option "Shutdown Director Opus when the Last lister closes." In both scenarios, the smart favorites are fine.

When I do a reboot (or shutdown and boot) without having actually exited Opus, the smart favorites blank on reboot. Is there some process Opus needs to complete before the PC shuts down?

That's why I linked to the FAQ on exiting Opus.

It suggests that the OS is either killing dopus.exe before it has had time to write its configuration (but you'd usually know that as the OS waits a long time and then displays a list of processes it's still waiting for and asks if you want to end them), or the filesystem is losing the changes Opus wrote to disk (which should not happen, but maybe could if e.g. an anti-virus tool or similar is filtering disk writes and has a bug to do with shutdown).

Another possible cause is that Opus is actually crashing during shutdown, half-way through writing the file. That could be cause by things like shell extensions, plugins, video codecs (essentially, any 3rd party DLL that gets loaded into Opus and then goes wrong if the process exits during shutdown). The Windows event log should indicate whether or not this is happening: Open the Start Menu and type eventvwr (return), then go to Windows Logs -> Application Logs and look for recent entries with Error level. Ones with Application Error in the source column indicate program crashes, with the name of the program inside the event.

There may be other clues in the event viewer. Look for other Error events under Windows Logs -> Application and Windows Logs -> System, especially around the time of shutdown. For example, there may be events saying that the filesystem failed to write its caches to disk.

(Don't bother looking back through the event logs for too long; if there's anything useful in them then it should be reported for every single shutdown, so you should only need to look at the last few minutes' worth of events after a reboot.)

No errors are showing in the Event viewer related to Opus. The only thing I can think that might be involved is that Windows is shutting down quicker than it should. I did a check on the typical registry entries for shutdowns (WaittoKillApp, WaittoKillService) and they appear to have the default values. I seem to think that the delay for shutting down might have been shortened, but I can't find out what that setting would be for the life of me (and many a Google search).

It would be a setting for Windows7 related to how long the popup "Windows will shut down in less than a minute" shows on the screen. Mine shows for less than 10 seconds. That might be the culprit, but I can't find how to make it longer. Any ideas?

I think we know what might be causing this now; could you please file a formal support request through the GP Software website and we can give you access to a trial version for testing.

No word yet from support - is there a way to track the support ticket?