Can not make a new BrIefcase

Which version of Windows are you using?

Edit: As a workaround for now, you can use Explorer to create the briefcase.

Creating a briefcase seems to work for me on both Win2k (release version of Opus) and WinXP (beta version of Opus, so may have a fix in it, but not that I know of).

What happens when you select New->Briefcase? Anything at all or nothing?

Where are you creating the Briefcase?

I need to use the briefcase but cannot see this functionality within DO (latest version running under Vista Home Edition). Whilst I have managed to create a Briefcase I can see no way to synchronize / update the source files from the changed "briefcase) files on the laptop.

It's done the same way that you do it in Explorer. Type "Sync using Briefcase" into Windows Help and Support and it gives you instructions. (Those instructions appeared for me automatically the first time I created a briefcase, too.) 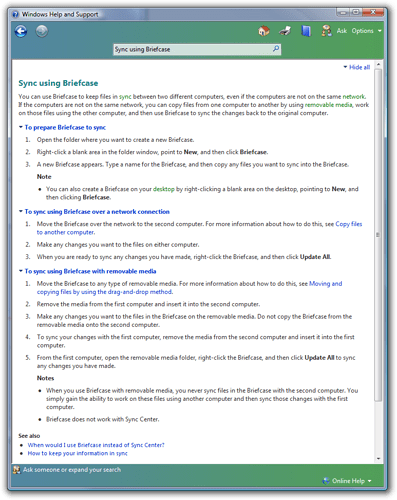 Leo ; great speed of response. I cannot really explain it because whilst the Briefcase was created I could not find the expected Update All sub-menu option. Until I tried it again in the left hand pane of the view window; and there it is (but not in the right hand pane showing the same folder) ....

Tell me how can I edit the contents of the sub-menu; it contains far too many options?

If you've configured Opus to hide non-Opus items on context menus then you'll have to hold Shift while right-clicking the Briefcase to see the Update All item.

If you haven't then I'm not sure why it wouldn't appear in the menu. It seems to here after a quick try.

Hello Leo; no it works but t also removes the key "Update All" option, so either I get next to no options on the sub-menu; or I get around 40 !

If you want to hide most 3rd party menu items, but still keep a few of them, then that is usually possible with a bit of effort.