Can the Viewer Pane use VLC instead of Windows Player?

Okay, I've squeezed a bit into one screenshot, because I'm not sure which of these details is important. But, there are two things I'm trying to figure out.

Note: The primary reason I'm trying to do this is because MKV files only play audio with a black screen in Windows Player, but VLC can handle them no problem. I have, however, noticed that AVI files play with a different player, as shown below. I've found, after tests, this other player respects the Automatically Play Movies checkbox in Movie Plugin Settings. This seems to indicate that replacing Windows Player will likely solve both of my issues.

I'd love any advice. Thank you in advance! 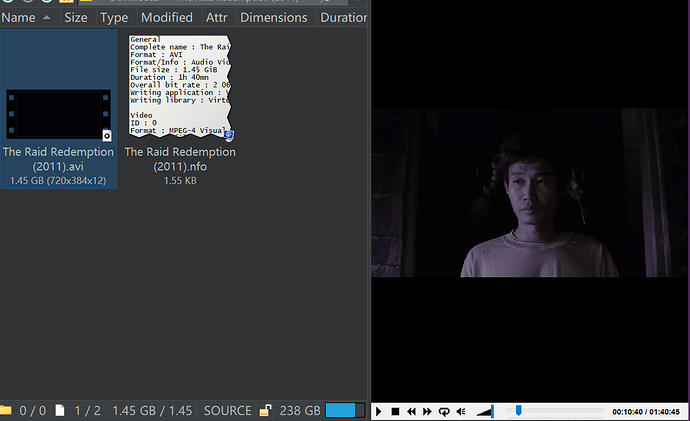 There’s no way to use VLC there unless someone writes a plugin (either an Opus viewer plugin or a more general preview handler which would also work in File Explorer).

There are three options for movie playback in the viewer at the moment. The Opus movie plugin (your last screenshot), the Windows Media Player ActiveX control (your other screenshot) and the WMP preview handler.

The latter two can be turned on or off, as well as some control over autoplay, by configuring the ActiveX+Preview+Office+Web plugin in Opus, which is like a meta-plugin to allow things made for File Explorer and IE to work within Opus’s viewer.

Hi @Leo, thank you for the update! Hmm, okay.... I'm playing in the ActiveX Plugin settings now. It seems like perhaps the ActiveX 32-bit Player may be capable of running MP4 or MKV files. When I add those extensions to its list, they disappear. I do, however, appear to be able to add them to the ActiveX 64-bit Player's list. Unfortunately, though, even if I uncheck the box for Windows Media Player, it's still playing in the Windows Player in the Viewer Pane.

Any idea if it's possible to get any players other than the Windows Player to work with MKV and MP4 files in the Viewer Pane? 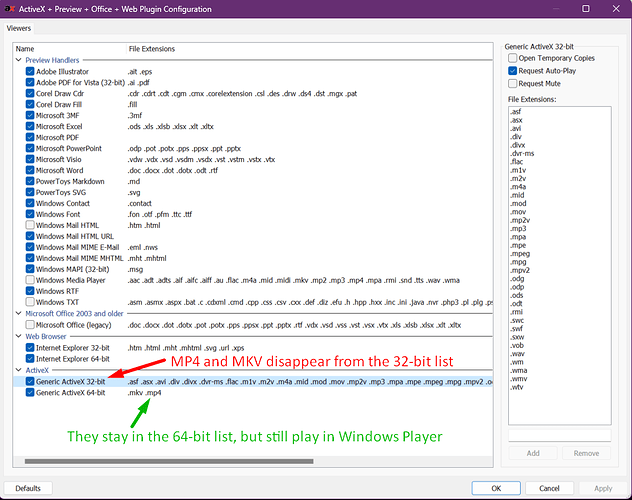 If you add them to the 64-bit line, they'll be removed from the 32-bit line. They can only be assigned to one thing within each section of the list.

64-bit WMP exists but people often don't have codecs installed for it. 32-bit is usually the way to go. You may also want to turn off the Request Auto-Play option seen in your screenshot at the top right.

Also try the Windows Media Player preview handler in the top part of the list, as an alternative which never auto-plays.

Disabling the Opus Movie plugin is also advisable, if you want to use something else. Otherwise, the Movie plugin will be tried first and other players will only be used if it then fails to load the file.

Understood! I'll keep playing with this, and I'll let you know if I can identify an ideal setup. Thanks for all the tips, Leo!