As the title says, I cannot enter any folders on disc via DO. If I try shortly after my Acer laptop has booted up then no problem, and it stays ok for the rest of the session.

The “My Computer” desktop icon doesn’t allow either.
I can use Windows Explorer instead, but I normally reboot if I have missed the short time window.

No problem on my other laptop and desktop.

Not sure how much time there is before lockout, maybe a minute or so.

Win 10 very latest build. Its been like this since sometime last year, so several Windows updates, and a few DO updates haven’t fixed it.

What actually happens? Is there an error message?

Can you run Opus via the Start Menu and then navigate to the folders within Opus?

Make sure you are not running Opus elevated via UAC, as that will block the ability for other programs to ask it to open folders: Why NOT to run Opus as Administrator under UAC

Ok, thanks for the prompt reply.

I think it must take several minutes before I cannot access the folder shortcuts, “This PC”, DO in “Start”, on task bar etc.

I tried it now and after about 2/3 minutes no problem, rebooted and waited about five min. and locked out.

I put direct DO shortcut on desktop to its file location also, no go.

“This PC” and my “John” shortcut are the only shortcuts that can be opened, accessed via “Open” i.e. Win explorer.

If I try open file location in the folder shortcuts nothing happens also.

How do I check if its using UAC ?

How do I check if its using UAC ?

That page I linked to tell you how.

Ok, I restarted the laptop to get DO usage again, Just above the menu items File Edit FTP etc there is only the current file path, no ADMINISTRATOR mention.

I put direct DO shortcut on desktop to its file location also, no go.

So launching Opus itself, not a folder, also fails?

Have you tried disabling your antivirus in case that's causing problems?

Have you tried launching via the Taskbar or Start Menu instead of the Desktop? (Is the Desktop the standard Windows desktop, or is it being replaced/modified by third party software?)

You could try making a Process Monitor log of what happens when you double-click, and sending it to us.

Was out for a walk so only got to reply now.

I covered some of this in my 1st. post, no harm to repeat.

I cannot run Do from the Task Bar, from the Start menu, a desktop shortcut, "This PC" on screen Icon.

I disabled my Symantec AV, made no difference, not surprised, why would the AV allow DO to run but only block it after 3:30s.

So far I have timed it roughly and from pressing the laptop power on button to 3m:30s is ok with DO. By 4m:00s DO is locked out. So exact time of lockout is somewhere between 3:30 and 4:00

The Desktop is just Win 10.

I have downloaded the monitoring util, will do that next.

I attempted to send you a PM with link to Process Monitor log file, not sure if I did the PM correctly ?

Based on the logs, it looks like Opus is finding an existing instance of itself is already running, and is asking that to open a window.

That can fail if the old instance is elevated and the new one you're running isn't, as Windows will block non-elevated processes from sending messages to elevated ones.

If you open Task Manager, and go to the Details tab, is there a dopus.exe there?

If it's there, add the Elevated column to Task Manager (right-click the headings at the top of the process list, then Select Columns, and find Elevated in the list): 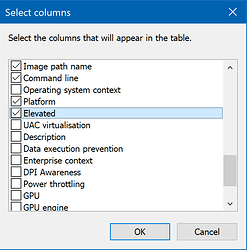 Dopus.exe should say Elevated: No in Task Manager, like this:

If it says Yes, that's your problem. See Why NOT to run Opus as Administrator under UAC for more detail.

If it says No, please make a snapshot of the process and send it to us: Manually generating process snapshots.

Ok, I managed all of that in TM.

It says YES. So that's my problem, how do I get it changed to NO ?

I checked out the properties, shortcut/Advanced plus compatibility. Run as Admin was unchecked in both.

Also I never see ADMINISTRATOR in the title bar.

Would it maybe fix it if I uninstall and re-install DO ?

When I boot up and run DO before the 4 minute inactivity, and I can access the folders, in the "Elevated" column it now says NO.

If it’s not elevated when you boot but becomes elevated later, you’re probably exiting the program and then something else which is elevated is re-opening it. (Programs launched by elevated programs will also be elevated, unless the program doing the launching goes out of its way to prevent it.)

This shouldn’t normally be an issue if Opus is run un-elevated and then stays running in the background (which is the default configuration) but could be if you exit it or have configured it to exit when no windows are open.

but could be if you exit it or have configured it to exit when no windows are open.

How would I go about changing that if it is the case. i.e. "have configured it to exit when no windows are open."

I disabled all items in TM's Startup tab, but that didn't fix the problem

I disabled all items in TM's Startup tab, but that didn't fix the problem

There's no reason to do that. Only disable those things if you don't want them to run at startup.

How would I go about changing that if it is the case. i.e. "have configured it to exit when no windows are open." 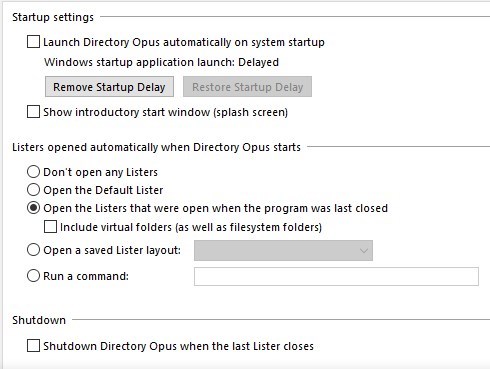 This is a screenshot of that, not sure which item you are referring to, is it the "Shutdown" one ?

Yes. It looks correct. If Opus isn’t elevated at boot, but becomes elevated later, then something must be causing it to restart. Pay attention to what you’re doing at the time it next happens and the cause might reveal itself. Maybe an installer/updater for some other software is restarting it incorrectly? It’s not something that would happen under normal use.

Fair enough, but I am doing nothing to cause it to restart, it's time dependent, something under the hood is doing it.

To recap. I switch on the laptop. I attempt to open any shortcut to any folder, or My PC or a shortcut to DO then one of two things happens. If it's 4 minutes or later from laptop power on then I have no access to any folders, drives using DO.

If it's less than 3:30s then everything works ok, full use of DO.

In the two scenarios given above, I don't attempt to interact with the laptop, run any apps, I just sit and wait based on time, before 3:30s or after 4m.

It's not something Opus is doing either. Opus doesn't randomly restart itself, and physically couldn't restart itself elevated (it would trigger a UAC prompt if it tried to).

Something else that's already elevated must be involved (unless you've turned off UAC prompts and have it in "always approve without prompting" mode, which is very rare). 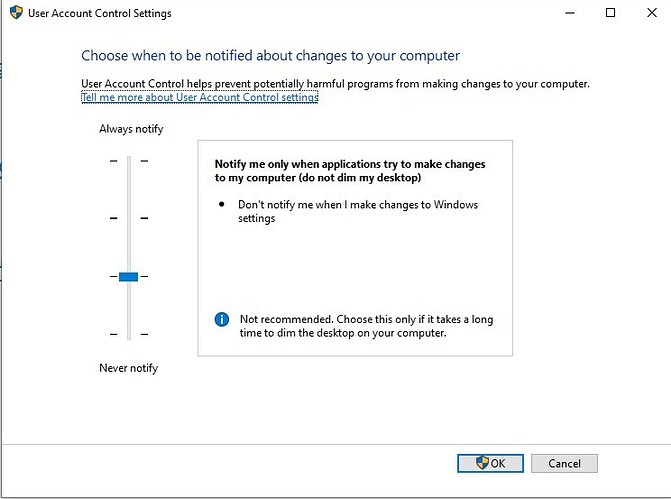 Something else that's already elevated must be involved . Looks like that all right.

I'll uninstall and then re-install, on the small chance it might fix it.

I restored the configuration from the other machine, then installed ver. 12.26, build 8006.
Had to download from web site, the DO update kept giving a timeout message.

I waited as long as 5 minutes after start-up, still ok. Previously always no go after 4 minutes.

Thanks Leo for all your time and effort. If it doesn't stay good i'll let you know.

Completely un-related I know. I am getting great use from your "Camera Models" column, thanks. It will probably get integrated into v13 ?