Apparently DOpus 12.2 has a conflict with CFi Shell Toys. Refuses to use them and removes them from the context menu.

I really like version 12 overall. It seems snappier and more responsive.

This is a problem. Please find a fix

CFi Shell Toys is not something we block out of the box (list of blocked extensions here).

Make sure you have not turned on Preferences / Miscellaneous / Windows Integration / Hide Windows items on file context menus (shift overrides) (or hold shift when right-clicking, if you have, or add the appropriate commands to the context menu to force ShellToys to appear even when the setting is on).

From a quick test with Opus 12, Shell Toys seems to be working OK at least initially: 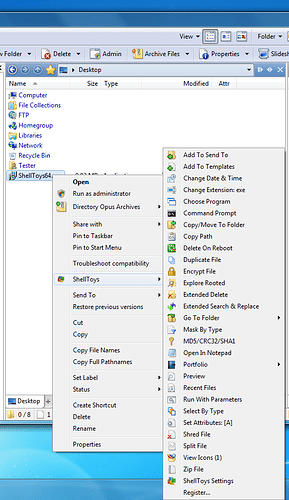 It is blank by default. If it contains GUID values (long numbers in {...}) then each one will tie to a shell extension from your system. You can look up the GUID values using a tool like ShellExView.

We have had one or two reports of CFi Shell Toys crashing within Opus, so it may well have been caught and automatically added to the list on your machine. We haven't had a large number of reports about it, though.

Note that CFi Shell Toys is abandonware and has not been updated in four years. If there are bugs in it or things that need to change due to new versions of Windows, there is little chance of them being fixed as the creator has stopped working on it. See Does anyone know what happened to CFI Shelltoys?

By the way, from a quick look at it, you can do a lot of what it does using Opus's built-in commands. If you are using it for a particular thing, we might be able to tell you how to do the same using just Opus without the need for installing an extra component.