It was originally based on steje's Toggle automatic folder size calculation script:

Requires Opus version 11.16 or above. This was as much an excuse to share an example of what could be done using the cool new scripting interfaces in Opus v11 as it was to provide something of potential use to others. It came from discussions in sev…

The two scripts differ in the way that the folder calculation is triggered. The other script does not change the CalcFolderSizes option and instead calls the internal GetSizes command.

The provided button sets the variable for the current tab, and refreshes the file display. The button should be placed on the File display toolbar.

Here the button on the source is checked. CalcFolderSizes is enabled and the buttons are green: 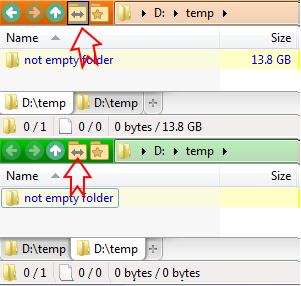 The provided button icons are based on these by Cris:

The .osp file is an Opus Script Package, which includes the script itself as well as the toolbar icons that the button uses. You can rename the .osp file to .zip to look inside it.