What happens when you try to use it? Or is it not there at all?

Does it work from any programs other than File Explorer?

When did it last work, and what changed since then? Was it updated, or Opus, or both?

Does it work from any programs other than File Explorer?

Yes, it does, for instance with the context menu from Everything.exe, which looks similiar to the one from DOpus

We've investigated and the issue seems to be within ZoneAlarm's shell extension (zlavscan.dll).

Opus is asking their shell extension to run, so we've done our side of things, but it then runs and waits forever for something to happen while trying to create a proccess. (We can't tell what exactly, as we don't have their source code.)

Since CreateProcess is hanging, and antivirus often hooks CreateProcess, it's possible that ZoneAlarm itself is blocking dopus.exe from launching a ZoneAlarm executable, and causing its own context menu to break as a result (when it's running inside of dopus.exe, and possibly other executables, even if not all of them). That would be my first guess, but it's only a guess.

Failing that, reporting the issue to the ZoneAlarm developers may be the best thing to do. 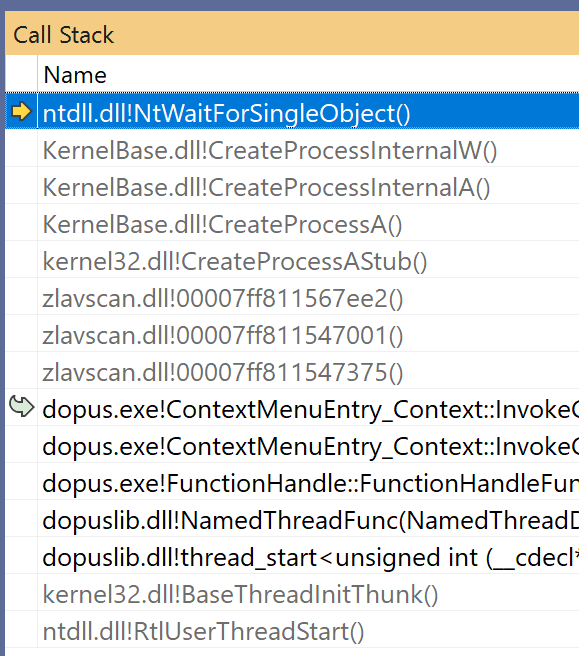 Today I tested the problem on my Laptop, which had still installed DOpus version 12.21.0.0.
The Antivirus Scan worked!
Then I updated to DOpus 12.22 - and it didn't work any longer.

It's possible ZoneAlarm is reacting to some difference between versions and blocking the shell extension from launching its exe in one but not the other.

(The signature we use to sign the executables changed between 12.21 and 12.22, which has caused Windows Defender to do some strange things as well, as an example.)

We can't debug what's happening because it's not something that is happening within our own code. We ask zlavscan.dll to run the command. It starts running the command but then gets stuck on something. The only people who can fix that are the ZoneAlarm developers.