Am using the free MyFolders tool to have the context menu expanded in a way that I can preconfigure a number of 'frequently used folders' that I can then move files or folders to. It is easy to delete/add folders.

Wonder if this is possible directly within Opus, without using this tool.

Yes, it is. The Copy command has a TO argument that lets you specify a destination folder.

After about an half an hour of trying, I am afraid having to confess that I don't have the expertise to combine a number of these "Copy TO" "Move TO" commands into a expanding context menu submenu, similar to MyFolders.
Seems a bit more complex within Opus.
Maybe one day Copy To... or Move to will be added to Preferences-File Operations, where users can add preferred folders.

Which part are you having trouble with?

Wonder if this is possible directly within Opus, without using this tool.

Despite its label, I finds that REName is also a way of moving file, depending on what you want to do.

Sorry to confuse the issue.

There would be maybe 8 or 10 single "Copy TO..." commands making the context crowded.
Figure this should be combined in 1 submenu item that can be 'expanded' .
Vainly tried to create such a 'expanding'context menu item / group / or whatever it is called.

You look like you're nearly there. See the bottom of the Context Menu page in the help file for a description of how to add sub-menus.

I tried that already, of course.
Most likely I am doing something wrong, but after creating a sub-menu item and moving it to another location in the context menu listing, all other items below this newly created sub-menu will then automatically be added to the sub-menu. One way or the other I can't manage to create 1 sub-menu item, move it to a specifc place and then add an existing contest menu item to it whilst leaving other items untouched (i.e. not moving to the submenu)

Anyway, definitely no offense meant, leave it. There is this 'alternative' (MyFolders) available.
Maybe something similar could be added to a future release of Opus, as an add-in/plug-in, whatever, making adding/deleting folders in an easier way. Or not.., but obviously that's upto you. 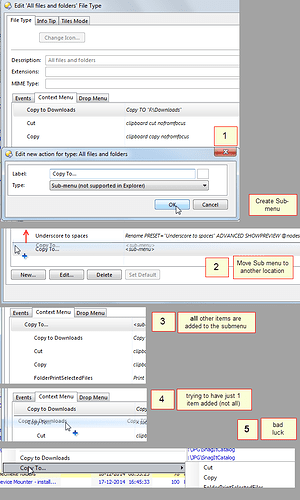 Simply right-click on the first item you don't want to be in the sub-menu ("Cut" in the above screenshot) and choose Decrease Indent from the context menu.