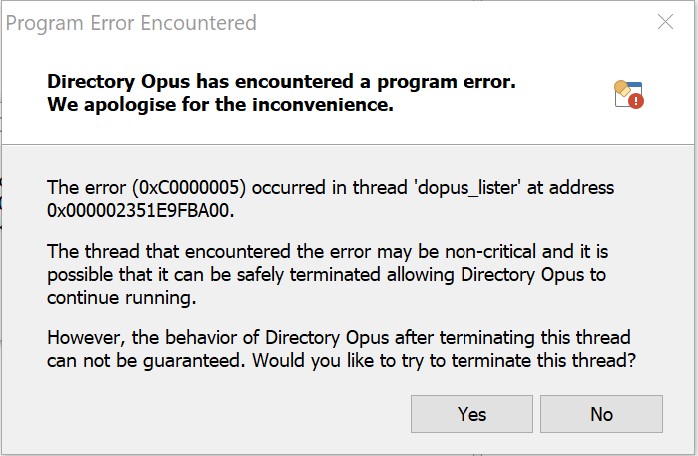 Were any crash dumps created?

Automatic crash dumps: In the event of a crash, Directory Opus will usually create a "dump file" in the temporary folder which contains information that may be useful in diagnosing the cause of the problem. To locate these dump files: In Opus or …

Does it happen consistently, or at random? And is it only triggered by a particular file or type(s) of file?

Sorry I don't get notified of responses. It happens consistently. It happens on a Dell XPS15. We have reimaged the unit and transfers work great until we install directoy opus and then the lockup issues start. No dump file is created.

If you type /temp into the path field in Opus, there's definitely no DOpus.Minidumps folder below where it takes you at all?

It's unusual for a crash dialog like the one in your screenshot to appear without a dump being created.

Assuming Opus is up to date on the system, crashes like that are usually caused by third party software that injects itself into Opus (e.g. shell extensions, or sometimes antivirus).

With an SD card it could also be the drivers for the card reader (which sometimes don't cope with different buffer sizes properly, although they rarely crash, so I'd be surprised, but it's possible).

Without a crash dump to look at, I would try disabling shell extensions using ShellExView, as detailed here:

The part about viewer plugins is also worth a try if the viewer pane is open, or you are in thumbnails mode.

If the crash happens when or shortly after you right-click a file, not just when copying files and doing nothing else in parallel, then this has some additional suggestions: