DO 11: Can't get Libraries to expand when opening a Lister

I am trying to configure my Default Lister to open with the Libraries folder (which resides above my disk drives/under the Desktop) fully expanded, with a specific folder on one of my drives already selected, like this: I have these settings checked which I understand to mean the Libraries will be displayed fully expanded, with sub-folders automatically visible.

After saving this Layout as my Default Lister, whenever I open this Lister, the Libraries folder is not expanded:

How do I make my Lister open with with the Libraries folder fully expanded?

I have these settings checked which I understand to mean the Libraries will be displayed fully expanded, with sub-folders automatically visible.

Your understanding is incorrect. The 'Show member folders individually' option only causes Opus to ultimate Explorers behavior of showing the 'member' folders under the root of each library instead of just showing the 'contents' of the member folders merged together.

So for the Documents library... this means you would actually see your personal 'My Documents' folder and the 'C:\Users\Public\Public Documents' folders listed, as opposed to just seeing a merged view of their contents.

It doesn't have anything to do with auto-expanding the libraries. In order for an item in the tree to be expanded when loading the lister - you need to have a folder tab active that is pointing to a sub folder. Other than that, there are several controls available on the Preferences / Folder Tree / Options page that let you control folder auto-expansion. But none of them do what exactly you want to do.

OK, thank you. How about this: I have my Listers set to automatically expand a folder when I click on it. This works properly on all drives, but when I click on the Libraries folder, it expands but only shows the immediate sub-folders, like this:

Is there a command that would make the Libraries folder expand all child branches when clicking on it? Thank you for your help.

What do you mean by:

I have my Listers set to automatically expand a folder when I click on it.

...what setting in Prefs are you referring to, and what are you expecting it to do?

If you're talking about the Preferences / Folder Tree / Options / Expand selected branch option, then what this means is that clicking on the folder name in the folder tree will cause it to expand and display the immediate child folders underneath it - withOUT having to manually expand it by clicking on the [+] glyph. So, clicking on the top level 'Libraries' folder... would then expand to display your 'Google Drive' and 'Microsoft OneDrive' library folders... which from your screenshot, appears to have worked.

Not that I know of... though you might be able to come up with an alternate selection event in the Preferences / Folder Tree / Selection Events page...

I recently installed both Google Drive and Microsoft OneDrive on my computer. I added the Google Drive and OneDrive folders that were created to the Libraries folder. Then I added 2 identically named sub-folders under each of the main folders, which then looks like this: I then clicked on a folder that I want to always have focus whenever I launch a new Lister (in this example, the C:\TEMP folder), so the Lister now looks like this: I'm thinking this might be a minor bug that could be fixed in the next BETA release?

I don't ever recall Opus retaining the expanded folders in a layout for anything other than the active folder tab in the layout... so I doubt this will be considered a bug so much as a feature request. For instance, even OTHER tabs in my layouts don't have the folders they are pointed at expanded in the tree - and it seems like you're asking for an arbitrary folder path to be expanded (i.e. not even folders you've got loaded into other tabs in the layout).

I don't use tabs, my Listers are very stripped down and pretty bare, I only run a single Lister with the folder tree on the left, and the file tree on the right. Having a Library folder fully expanded when I load a Lister should not be hard for the great programmers that make Directory Opus. Besides, the fact that I saved a Lister Layout with the Libraries folder expanded, which is what Leo asked me to do, but it's not saving my settings correctly, is not quite right.

Directory Opus has a million other capabilities and features, loading an expanded Libraries folder at startup should be a pretty basic feature, IMO.

Opus 11 will remember which tree items are expanded at the root, so if you put your Libraries folder at the root instead of under the desktop you can at least have that expanded on startup. It doesn't remember the state of any items underneath the root items.

Can you explain how to move my Libraries to "root"? I'm Googling it now, but I'm not finding any answers that are working. Thank you.

Turn off the "Display under the Desktop item" option (it's one of the ones in your screenshot of the Prefs page earlier in the thread) and it'll show under the root instead.

[quote="SomeYoungGuy"]I don't use tabs, my Listers are very stripped down and pretty bare, I only run a single Lister with the folder tree on the left, and the file tree on the right. Having a Library folder fully expanded when I load a Lister should not be hard for the great programmers that make Directory Opus. Besides, the fact that I saved a Lister Layout with the Libraries folder expanded, which is what Leo asked me to do, but it's not saving my settings correctly, is not quite right.

Directory Opus has a million other capabilities and features, loading an expanded Libraries folder at startup should be a pretty basic feature, IMO.[/quote]
I don't how any of that is relevant to what I said... so I'm not sure what you're trying to say. I also can't say why Leo and Jon keep suggesting that you try different settings, unless perhaps they're not totally clear on what it is you want to do. But I don't think any of their suggestions will accomplish what you are asking, and to the best of my knowledge Opus has never done what you're asking in any version... (but maybe I'm wrong).

I believe what Jon just suggested is what you would get if you DISABLE the Preferences / Folder Tree / Contents / Libraries / Display under the Desktop item option... This will then bump the top level 'Libraries' folder to the bottom of the tree, at the same indentation as the Desktop namespace. And as Jon said, it will also expand the Libraries folder. But that will only show you the 'Google Drive' and 'Microsoft OneDrive' library folders... not their contents like you asked for (i.e. the SecurePass Files and Outlook 2010 Files sub-folders you've shown us in your screenshots under each of those libraries).

So... my point was, that the specific thing you want seems to be a feature request - which would save any arbitrary folder tree expansion you have at the moment as part of the layout - regardless of whether or not you have any folder tabs pointing to any of the sub-folders that you want to see expanded or not; which is how it currently works, outside of the root-level stuff Jon just described.

As for clicking on the 'Libraries' folder tree item and then auto-expanding it, with the v11 Beta's... I might be able to write a Script Add-In that could that... if you're interested in trying it.

I would love it if you wrote a Script Add-in that would do what I'm asking for. It would be very appreciated. Thanks for the help.

Ah damn... there's no raw command equivalent to what the numpad * key does (the Go EXPANDTREE command just expands the children of the current selected folder, not any of it's subsequent ~grand-child folders). 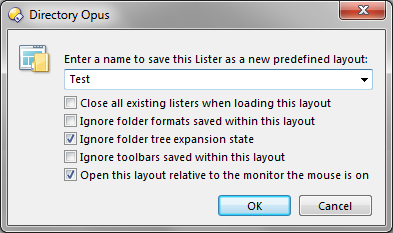 ...or just make it the default way of saving a layout, and the rest of us just have to clean up any folder ~temporary folder expansion in our trees before saving layouts. In any case, I think what you're asking for makes sense - even though I have no need for it myself.

Note: we shouldn't make assumptions on how easy or hard it is for GPSoft to change something. But if it's ALOT easier for them to add an EXPANDTREEALL arg for the Go command that would duplicate the behavior of pressing the numpad [*] key in expanding ALL sub-folders of the selected folder than it would to create an option to save the tree expansion state in the layout, then I'd be happy to spend some time on a script that would do what you want when clicking on that top level Libraries folder. Actually, we can't make it specific to juuuust clicking that folder in the folder tree, it would have to work however you make the 'Libraries' folder the current sourcepath (using one of the On<>FolderChange events defined in the scripting interface)...

Thank you for looking into this for me. Much appreciated

1.) That was just a mock-up of what I said that GPSoft could consider adding as a feature request.

2.) Nobody's questioning their skill... point was that just because someone thinks something seems trivial, doesn't have any bearing on the effort required. Maybe they'll consider if a bug and just fix it... but again, I don't recall Opus ever working this way - so it seems less a bug and more a feature request. And even as a feature request, maybe they'll just do it for you... but if the effort is more than they want to take on while still trying to wrap up the changes to v11 and everything else on their plates - but an EXPANDTREALL option for the Go command is mush more easily accomplished, than you still might see some improvements here for what you want to do.