After my recently install of Windows 8.1 64-bit and, of course, installation of Directory Opus (version 10.5.5.0), I noticed that the typical start button right-click context menus of the Windows desktop do not work anymore. I am not sure this has something to do with Directory Opus, because I installed several programs after it. But still, as Directory Opus can replace Explorer including all file system folders, I wonder whether this problem is triggered by Directory Opus.

My guess is it probably isn't Opus, as Opus doesn't have much to do with those menus.

In the right-click context menu are references to: Desktop.lnk, Run.lnk, Search.lnk, Windows Explorer.lnk, Control Panel.lnk, etc.
Only Desktop.lnk, Run.lnk, Search.lnk works from the start button context menu, and the others not. Directory Opus can take over Windows Explorer, Control Panel and Command Prompt (all of them works started from Directory Opus).

When you said "jams" I thought you meant stopped the menu opening at all.

Opus should never affect Control Panel except on Windows XP, which is why I suspect (and mentioned in your other thread) that it's been put into Compatibility Mode and thinks it is running on XP. If that's the case, you'll want to turn off Explorer Replacement, then fix the Compatibility Mode setting, reboot, and then (if desired) turn Explorer Replacement back on. Details are linked to in the other thread.

OK, I would like to follow-up your suggestion, but do not understand you saying "and mentioned in your other thread"?
How do I change the Compatibility Mode of Opus?
By the way, I checked my Windows variables, especially the Path settings, and added "%userprofile%\AppData\Local\Microsoft\Windows\WinX" where all the links of the start button context menu are. Now all the start button right-click context menu items work!
Still I would like to try your solution of the Compatibility Mode of Opus.

Apologies! I got confused about who had posted which question, and the thread I was thinking of was by someone else. Here it is: Win 7 + Opus 11

I don't know why you would need to do that or why it would help in any way. Where did the idea to do that come from?

The idea to do that came from the fact that Control Panel works when started from Opus, but not when I want to start it by right-clicking the start button. I thought that perhaps the links that are called from the start menu could not be find by the system, but perhaps could be found when I added the path setting. Indeed it did work (without rebooting).
I will follow your suggested link and will first delete the extra path setting I made and will check if it works.

I think it's a complete coincidence that changing the path variable appeared to make anything work (except perhaps that it caused programs to re-evaluate the environment variables).

I doubt any of this is related to Opus now, either, if things started working in other programs after just doing that.

Changing settings randomly like that is more likely to result in more weird problems like this than solve them. 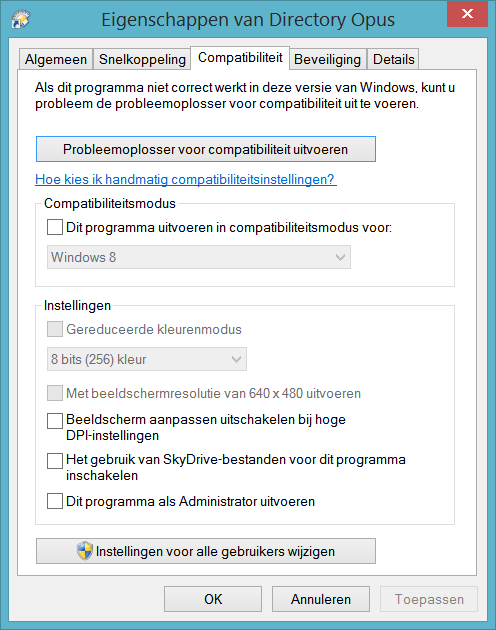