Could you post some screenshots of the mismatch, or maybe the steps needed to re-create it from scratch?

I am not surprised you are finding it difficult to follow, Leo. I hope this helps

I have a number of tab groups:- 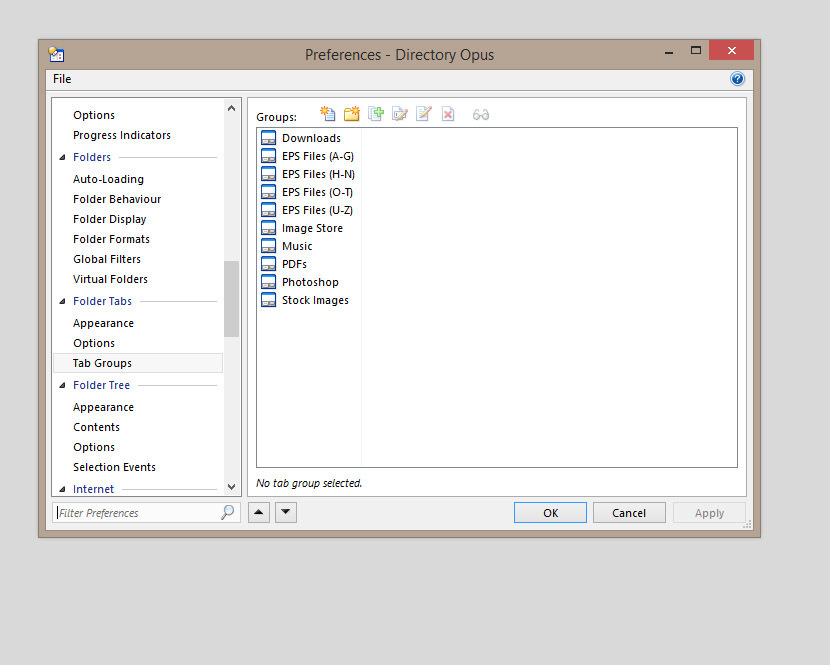 When I look at any of the tab groups apart from the first - Downloads - by hovering and right clicking over the lock, I am told correctly, that the format comes from the tab

However if I look in the same way at the Downloads tabs this is what I see:

Now I create a new Tab group called Apples to make sure it is the first tab group in the list: 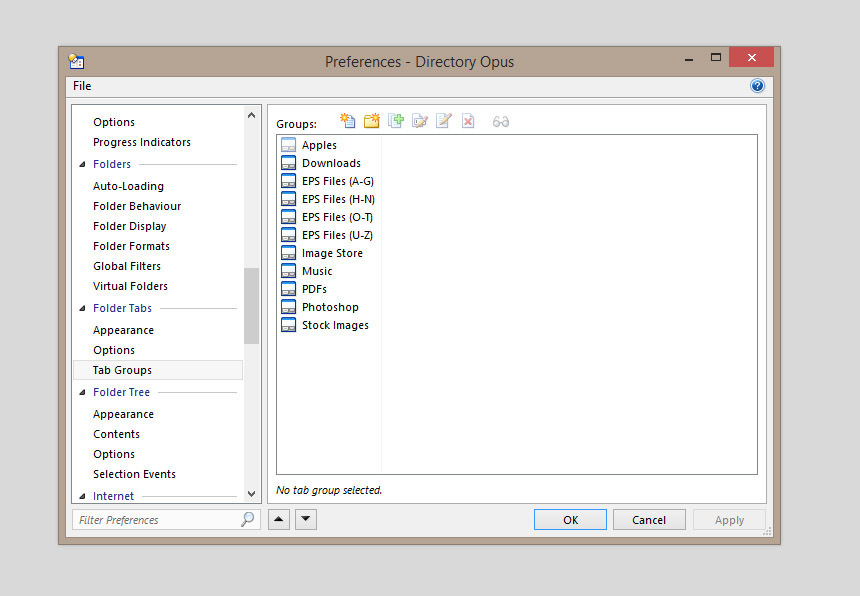 I restart Dopus select the Download tab setand look at the sources of the folder format:

I can now go ahead and hide the Apples tab group and the format continues to be correct.

Maybe it is something in my set up, but I cannot inmagine what it might be.

[quote="auden"]When I look at any of the tab groups apart from the first - Downloads - by hovering and right clicking over the lock, I am told correctly, that the format comes from the tab

However if I look in the same way at the Downloads tabs this is what I see:[/quote]

How are you looking at the tab groups?

I hover over the lock and right click to produce the effect in the image I sent.

By the way, I can rename the Downloads tab group to ensure it is not the first in the list, restart DOpus and it works like all the other tab groups.

I mean how are you loading the tab group to look at it.

The Prefs page lets you edit the the groups, but doesn't load them into a lister.

I'm wondering how you are loading the tab groups into your lister.

i.e. What are you clicking before you then hover over the status bar lock icon?

When I select an item from the drop down list on my toolbar that I mention in an earlier post the tabs appear at the bottom of the lister and I can use them. I thought this was how you loaded tabs into a lister. It has worked for years for me. 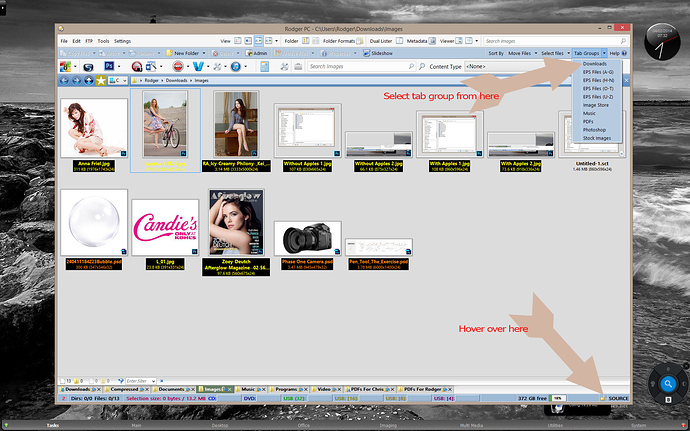 I simply hover over the little lock at the bottom of the lister to find the source.

I think I may be in danger of chasing the wrong problem here, Leo. 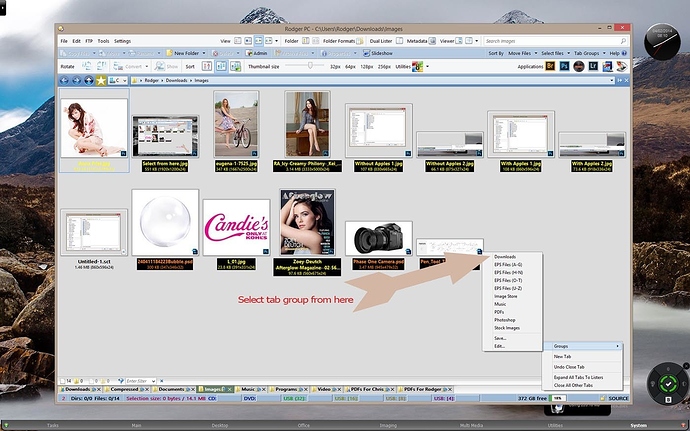 nearly all my problems go away.

The real problem is when I close Dopus down and reopen it. The automatic toolbar function does not work. The toolbar stubbornly remains on the last tab that i had opened in the previous session. I need to re-open the appropriate tab from the list in the tabbar to get the feature to work.

Is this how it should be?

You should get the same results from both menus, unless your custom menu is doing something unusual. (What command(s) does it run?)

When closing and reopening Opus, you're no longer loading the tab group (unless you then explicitly load it); instead you are loading a temporary layout saved from the last open lister(s). While those listers may have origtnally been the result of loading a tab group, they aren't the same thing when you save and reload them as a layout.

You are right. Both buttons operate identically. The confusion was caused by my not appreciating the tab groups did not automatically come back when you re-start Dopus.

Is there any method of achieving this. I have tried saving a lister layout with the appropriate tab set in it and loading that at start-up, but that does not seem to work.

What settings do you have under Preferences / Launching Opus / Default Lister?

That's not the Preferences page that I asked for, although it may be relevant.

Please post the Default Lister page I asked for.

Also, are you actually exiting Opus and restarting it, or are you just closing all the windows and later opening a new one? 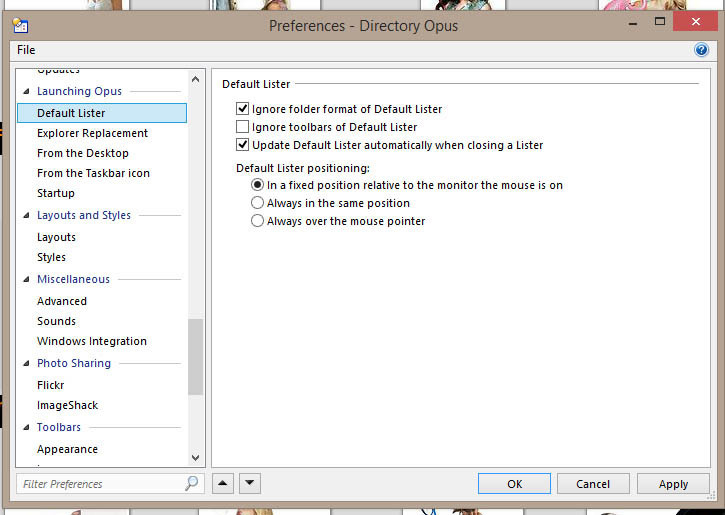 I think any differences in behavior you're seeing is based on what you have set in the rest of those Launching Opus pages... and what happens and doesn't happen in listers depending on how you're loading them. Since you provided two of the prefs pages already, it might make sense to show the rest.

That said, from some quick tests here - something does seem like it might be wrong. I'll explain more later, but in a quick test... loading the tab group from a user command like you're doing still shows the folder format as coming from 'Default Format' (hovering over the format lock icon in statusbar). As opposed to loading that same tab group in a lister that is already opened using the same sort of command (Go TABGROUPLOAD=aTest)... where it then correctly describes the format as coming from Tab# 4 in Tab Group "aTest".

So my determination is that loading a lister via the 'Go TABGROUPLOAD' command in a user command is not behaving the same re: folder format derivation as the same command in an open lister.

Also, why it's probably important for you to take us through a scenario from start to finish... particularly since you mentioned having tried "saving a lister layout"? Well, I'm also seeing that if I have a layout that I've saved directly after loading the tab group in an open lister (with the toolbar that the tab in the tab group is set to load), load that layout (with the toolbar open) and then come and manually run the tabgroupload command, the toolbar actually shuts OFF. Actually same thing if I run the command as a user command as a startup or desktop-dbl-click setting.

Last note: your last screenshot shows you've got the default lister set to ignore it's folder format... so if NOTHING else I found in my tests above matter, loading that default lister layout will just inherit its format from your default settings - in addition to what Leo described about layouts not preserving the 'tab group' context - and just saving whatever format the tab group loaded into place as the format of the layout you're saving.

The attached preferences seem to solve my problem. 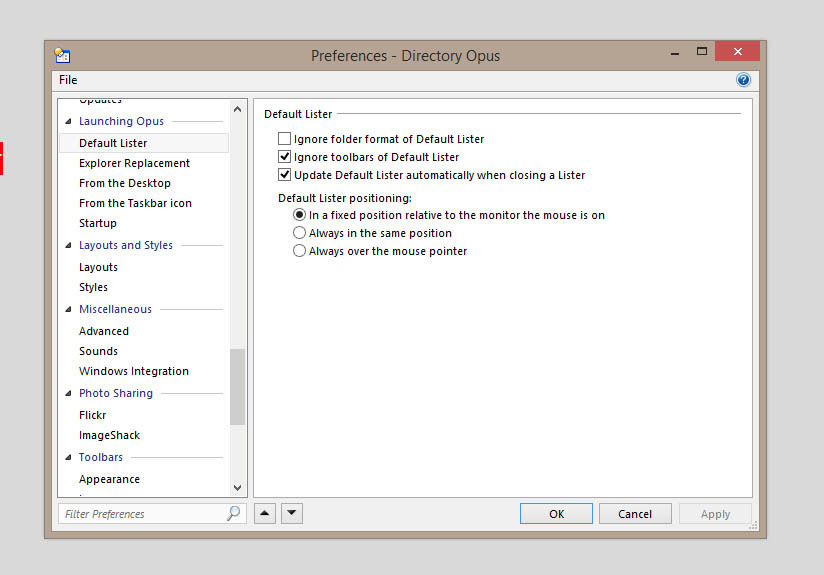 I have tried both simply quitting DOpus and killing it in the task manager and I am so far getting the toolbars to react as I would expect them to.

Please bear in mind that I am also running a user command to open a set of tabs when I restart DOpus. See one of my previous posts for details

You shouldn't kill Opus via Task Manager unless it is completely unresponsive, or you risk losing/corrupting your settings.

See the FAQ on how to exit Opus.

@Leo, there does seem to be an issue(s) here though - though I can't tell if it's related to the OP's problem since I have no idea how he's arriving at his results.

If you load a Folder Tab Group that has some specific formatting assigned to one of the tabs - using a command like 'Go TABGROUPLOAD=grpname' - the format lock shows the format as coming from the Tab Group as expected. THOUGH, I'm seeing the toolbar that I've added to one tab in the folder format flicker on then off again immediately.

Further, obviously - after loading the tab group as a layout (whether default or something else) won't retain any record of the format having been derived from the tab group, and it just becomes a format defined in the layout when you saved it, and again the format info from the format lock shows the expected derivation info.

But if you load the folder tab group as part of a user command set to run on one of the Launching Opus pages (say desktop dbl click), the format derivation info seems wrong sometimes. I saved the lister after loading the tab group using the raw command as the Default Lister. I then modified the Desktop dbl-click to run a user command that runs 'Go TABGROUPLOAD=aTest'. In the lister that opened on Desktop dbl-click - the format lock said the format was coming from the 'Default Lister'. I'd have thought since the lister that loaded was a result of the UserCommand to load the tab group, that it would have referenced the tab group in this case... but maybe launching a lister with a Go TABGROUPLOAD command is ambiguous and it is in fact loading the default lister?

Anyway, some confusing results depending how you mix things up... particularly the toolbar flicker on/off results mentioned just above...

I think Steje is right when he says the situation regarding tabs and toolbars is rather confusing, and certainly what he describes I can bear out from my experiences.

In order to see the "problem" in a nutshell, you need to do the following:

Now in your desktop create a shortcut to Dopus.exe

If you launch Opus from the shortcut, the toolbars react erratically and incorrectly

However if you launch from any of the methods you have set up in the Preferences the toolbars behave impeccably.

I am sure that some clever person could write a batch file or something to fix the shortcut so that it launched a tab set automatically.

I fixed my problem by steering clear of the shortcut and starting Opus by double-clicking on the desktop.

By the way, the new changing toolbars feature is wonderful. Well done to the Opus crew.