Recently, on just one of my installations, DOPUS is stealing focus from other programs. I can't think of any reason why this should be happening. For example, while viewing a PDF file, focus will just jump to DOPUS. Actually, while writing this just now, focus jumped from Chrome to DOPUS.

Is anyone else seeing this?

Are you running Actual Window Manager?

Leo, thanks for the speedy reply. No, I'm not even familiar with that app.

Anything else installed which changes how windows are positioned, moves them around or between monitors, makes them on-top or similar? It's usually something like that which causes similar problems.

(I mentioned AWM since it came up in an almost identical thread a few days ago: DO Window active after double-clicking video (Actual Window Manager) )

Another possibility is system-wide hotkeys in Opus have been configured which are being triggered by accident. If you've edited your hotkeys and created them as system-wide ones by mistake then pushing the same keys in other programs could activate Opus. This includes hotkeys on floating toolbars (ones that are separate windows, not part of any lister window).

I installed Dexpot just today, but this problem existed before that. Anyhow, I closed it and it still occurs.

Perhaps a clue... I was watching a YouTube vid on Chrome and used the 'L' shortcut to jump ahead 10 seconds. Immediately, DOPUS jumped into focus with a new tab trying to look at drive 'L'. (I have no drive 'L'.) Also, I I just typed 'L' the second time, it jumped again, but not the third time.

But, like I said, I don't have to touch anything can just be reading a PDF file and it will jump. Ha! Typing 'c' in 'can' just now, it jumped and opened a new tab to C drive.

If you go to Help > Keyboard Map, then scroll down the list, is there anything listed under either of these categories: 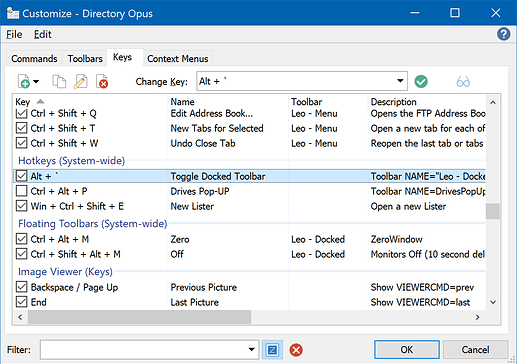 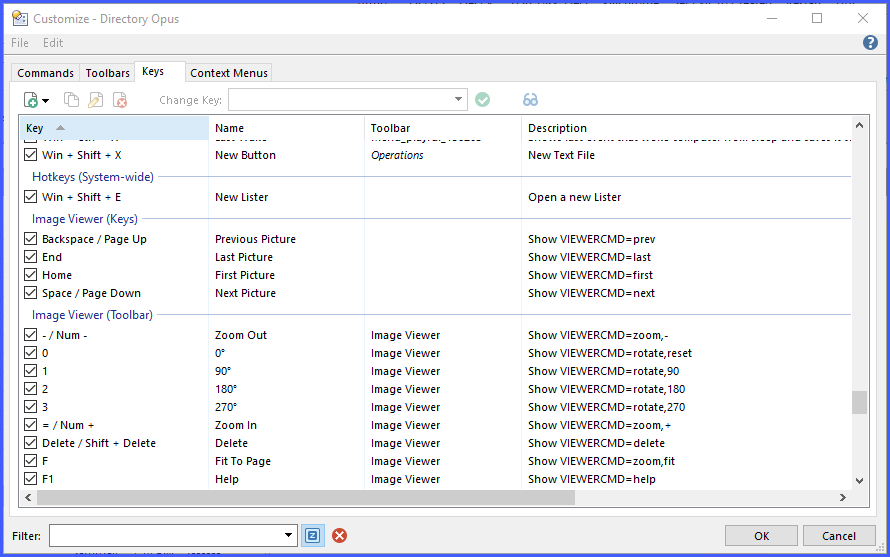 Hotkeys (System-wide) is shown in the attached image. I don't appear to have a section for Floating Toolbars.

Have you added the Drives drop-down control to your toolbars? That's about the only thing I can think of where a letter on its own could trigger reading of a drive (without also typing the : after the latter).

Another thing to try: If you set Preferences / Launching Opus / Explorer Replacement to Don't replace Explorer and click OK, does it continue to activate Opus, or does it start opening File Explorer windows instead? (It can sometimes take 30 seconds or so for that change to fully take effect, FWIW.)

I do have the Drives drop-down in a toolbar. The only drives present on this machine are C and S. S is a network drive.

Changing Explorer Replacement doesn't seem to have an effect.

Might be worth a try to remove it from the toolbar to see if it's involved. It's about the only thing I can think of* and isn't part of the default config, which could be why we don't have any similar reports for a problem that would annoy lots of people.

(*Although even then it's quite strange... Windows shouldn't normally even tell Opus about keypresses in another window, unless something has happened to join the two input queues. Which might still mean there's another puzzle piece somewhere.)

Leo, please keep in mind it doesn't even take a keypress. I was just now sitting back and watching, hands nowhere near the keyboard or mouse and it jumps. It appears to happen at exactly one-minute intervals. I'm checking that now.

Confirmed! It jumps every 60 seconds, exactly!

Do you have any script add-ins installed?

I see this in the script log... I haven't done any hash compares today.

These last timestamps are from over 2 hours ago.

It is so odd that it jumps every 60 seconds.

Most script activity doesn't result in any log messages. Try moving everything out of the scripts folder (type /scripts into Opus and it'll take you there) and restarting Opus (File > Exit Directory Opus) to ensure no scripts are running.

A script could have a 60 second timer doing something, perhaps. For example, there's a script that adds a clock to the titlebar which probably updates itself every 60 seconds. (I have a feeling it starts when Opus asks it for its name and other details, which is why you may need to move it out and restart Opus to stop it running.)

OK, I deleted everything out of the scripts folder and restarted. It hasn't jumped in over 3 minutes now. I'll keep watching and report back.

Thanks, Leo. If it turns out to be one of those scripts, I'll try to determine which one and let you know.

Here's the moved contents of that folder, just for info...

Assuming the problem has stayed away, any luck working out which script was causing it?

Adding each script back, one at a time, and waiting a minute or so would probably locate the one causing the problem. ScriptWizard is the one exception that's more complicated, since it can interact with the other scripts; might make sense to add it either first or last.

ScriptWizard and Settings Auto Backup look like the only ones likely to do things in the background rather than on specific events or when run explicitly, so they'd be the most likely to cause the problem (but may still be innocent, of course).

Leo, thank you for the follow-up.

I left that location within an hour or so of the problem resolving, but I fully intend to do exactly what you describe to determine which script is causing that.

I'm going back up there today and will hopefully have time over the next few days to work that out.

Leo, I did not have time to enter this test plan. I was busy erecting my Starlink antenna on a mast. I hopefully can close this out this weekend.