Adding the "Duration" column to a lister shows, as you'd expect, the duration of a video or music file in HH:mm:ss - all well and good, except that if the file is over 2GB then it doesn't.. the duration is left blank.

Is this a bug ; can it be fixed ; or so it just peculiar to my installation or some reason?

(Am running latest version - and I've experienced this on both Windows 7 and 10.)

Are you using FAT32? Maybe it's a limitation of that file system.

No - NTFS. But still, you could be on the right track, I guess.

The ones on your system for the file type(s) involved may not cope with files over 2GB, but it is not a limitation of Opus itself. 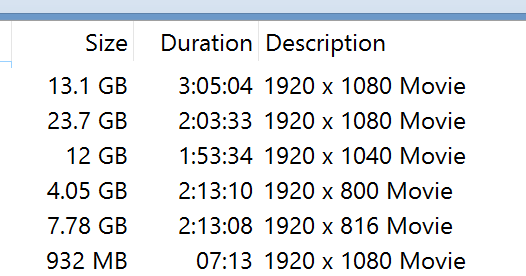 OK, ta - these are mostly mp4 files in my case... beyond that you've lost me I'm afraid. Is there anything I can do re codecs/splitters?

The MP4 splitter/codec which comes with Windows 10 seems to report duration OK with MP4 files over 2GB, so it may be a case of removing 3rd party components.

I don't know if it still works, but you used to be able to get the Windows components to take over the filetypes again by telling Windows Media Player to make itself the default handler. (You could then switch back to another default, with the registry settings still in-tact.)

This is somewhat unrelated to Opus though, and we aren't able to fix/debug your 3rd party video codecs/splitters or related registry settings for you (especially with a non-linked account), beyond the suggestions in the FAQ about media playback.

OK, thanks - it's not a huge deal, just one of those slightly annoying things. But, fyi, Windows Explorer (boo!) manages to display the duration for these large files OK, but not Opus, which is what seemed a bit odd to me. Anyway... cheers, P

I guess Explorer gets the data via a different route.