Hi, I recently installed Emsisoft Anti-Malware and the "Scan with Anti-Malware" context menu icon looks to be far off to the left of the menu as seen in this screenshot. 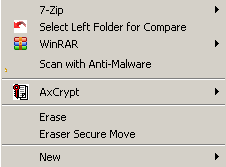 The icon displays properly in Windows XP SP3 Explorer. Is this a bug in Directory Opus or is there anything I can do through the Dopus configuration to get the icon to display properly? Thanks for any help and for creating such a wonderful file explorer!

It's because they are drawing it to the left of where the API is asking it to be drawn.

We actually try to handle that, since some context menu handlers do the same thing while others draw it where they are told. We ask things to draw in the right half of a space that is twice as wide as it needs to be... But because in this case it drawing in the left half of that space, but also drawing an icon that is wider than icons are supposed to be, parts of its icon are drawing into the right-hand side of the space, which makes Opus assume the handler has drawn in the correct place.

(I'm not sure why they are custom-drawing the icon at all, really, since Windows has had a better way to add icons to context menus for over 10 years now, by just providing an icon handle and allowing the host program to render it as needed. But if they want to custom-draw it, they just need to respect the X coordinates that are passed to the API and/or ensure the icon is not wider than the system's icon metrics allow.)

Thanks for the quick response leo. I posted this issue in their support forum too. I'll post the info you've provided and keep my fingers crossed for a fix. Have a great day!