Since I've asked for a few scripting related enhancements, I'll balance my Opus karma and make a request for the regular interface as well

In continuing to borrow ideas from web browsers, but also with Windows 10 coming to the fore - I wondered what people might think of using the Empty Tab (or hell, an all together different construct - say a Utility Tab) to host various widgety type things like how you say in various web browsers, where you have recently visited websites in Opera or Chrome.

But for Opus, I rather would like to see really large thumbnail style 256x or 512x iconified 'buttons' we could edit just like a standard toolbar button to do whatever we want. Maybe that's web URLs, maybe it other Opus tools that are nice to see in frame of the lister and file display while you're doing other work as integrated launcher.

Bringing an element of Win10 style app 'Tiles' into Opus... 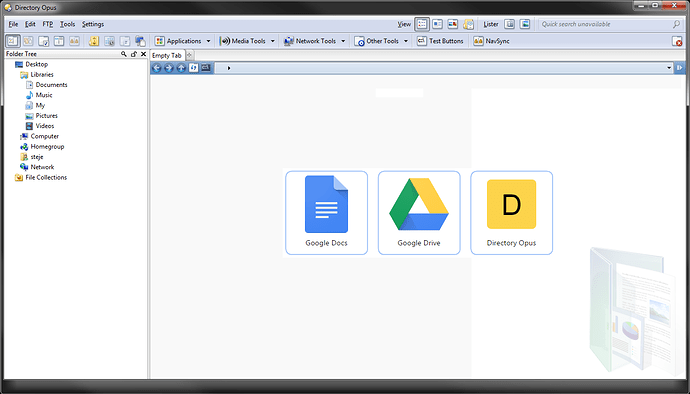 Don't know why I bothered with a mockup. Showing control panel in Thumbnails mode is just as good to get a visual across with the idea

You are using Opera, right?

Yep - hard to let go of the old version. Several muscle memory things I can't get easily in the others.

Hmmm. Who'd have thunk... yet another browser.

But you know what - it looks promising! Like people that made Opera what we used to love so much agreed that we were no longer getting what we loved and decided to do something about it

Thanks for pointing me to it!

Thanks again Sasa, I'm updating this post from the latest Vivaldi snapshot now

It's a bit slow and clunky to respond for me at this stage and some things just don't work right at all, aaaand it's still based on the Chrome engine. But it's promising! I'm going to keep following it's progress.

I get my mouse rocker gestures (hooray), my hotkey presses on links work as hoped, and I could easily import old Opera bookmarks! Two huge losses in the move to 'new' Opera.

My Xmas gift to you

I currently running both, as you said, Vivaldi is still beta, but every new version runs better.

Regarding the emptyness in empty tabs, I like the idea to fill it with life! It's the same emptyness we see when selecting a folder and looking over to the viewer pane.. nothing. What a good place to show some kind of folder summary, album/movie art, subfolders, description.txt or plain-text/html generated on the fly by a script or something.

So, "functional emptyness" in empty tabs or the viewerpane would be a welcome addition.

Btw: Another Opera+Vivaldi-User here! o) @Steje: Try the 32bit Vivaldi (in case you did not), it feels faster than the currently more experimental 64x build.

How do you all get empty tabs? I have a fav list of tabs (different for left and right lister) and of course none of them is empty

On the other side it would be cool placing fav folders/links and maybe commands into an empty tab like the browser do with sites (maybe also with "collections"/folders including a bunch of another folders/links like browser have). Would also be very touch-friendly.

The idea is not that bad.

Well, for me these empty tabs appear by just opening new tabs! o)
These tabs do not load a path automatically, as I find that useless and too slow at times (what happens is dependent on settings).

You could set new tabs to open a folder where you put shortcuts to folders or commands as you desire, and set it to open in thumbnails mode.

Oh I tried, not that bad actually! o)

After having created a flat list of shortcut files, I thought I could group them to folders, so I created folders like "network", "disk" and "favorite" and sorted the shortcuts into these. Now I wanted to save the folder format to be "flat view grouped", but forgot that flat-view is not a folder format, it cannot be used in newly opened tabs without scripts or embedded commands. Experiment stopped at this point, but quite an interesting approach.
I guess throwing in a script column and switching to the group-view could give a "My Computer" look-and-feel for this "home" folder. Thanks o).

If only scripts and embedded commands existed!

Yeah, I guess that'd give a similar 'effective' result. Not the same from a maintenance standpoint (treating big thumbnail sized buttons just like buttons as far as Alt-Click editing etc), and you don't get any contextual awareness (highlight state, toggle state, icon control).

Was just an idea to make this 'Empty Tab' thing useful - since it's "there" and some browsers do the same to good effect. Was going for an App / modern Tiles sort of thing... and this was the only existing place in Opus is sort of made sense to do something like that.

And OnRename()! o)
We could make good use of OnRename() as well, which fires for successful rename operations and allows to "live"-mirror any rename to backup locations e.g. Being able to create a log would also be possible, which then could be applied to the backup data before the actual backup happens. This would prevent huge files from being transfered over and over again, just because their filename changed a bit.

LOL bud... Seems the 'Empty Tab' turning into a 'Utility Tab' idea won't bring enough value vs effort if you can just simulate it the way Leo suggested, so.. GAME ON!

Besides - I'm hijacking my OWN thread with plugs for other sh!t... so - PILE ON!

In fact - I'm intrigued by why you think we need an OnRename event. Couldn't we just write our own script command to entirely replace the current RAW Rename command - and handle whatever you want in there?

I inline rename a lot or use the advanced rename tool for a lot of files at once, unfortunately there's no way to get in between and find out what items were renamed how. So no, a script command does not help unless I overlooked something, then please let me know! o)

Ah... yeah - the Advanced rename dialog is a great reason NOT to try to replace the built-in Rename. That's alot of work to redo that GPSoft already did really well. For similar reasons - I'm not inclined to try and write an entire Copy proxy either...

Interesting use-case. If you were to write such a thing against such a theoretical Event - I'd very likely use it. I have a series of backup drives that I copy the same content to. I'm just not interested in backup/sync utilities to keep them consistent. I handle it myself, and periodically diff individual folders against my portable drives to get the backup copies updated. It's not very efficient - but it doesn't take THAT long and I find 'looking' at the differences reacclimates me with my content and what I was working on while on the road.

This fairly often involves a bunch of renamed content, that takes way longer to copy to a series of backup drives than the time it takes to sniff out the differences. Having a log like you described to reapply to the backup set would cut down on most of the time spent simply reconciling differences (although again, it doesn't take a really long time - especially if I'm maintaining it frequently).

The file log already exists and can be configured to list individual files from batch renames, if I remember correctly.

But are there not also changes you make to files from outside of Opus? I can't imagine a scenario where you wouldn't still end up having to compare the folders the same way you are doing now.

Yeah - you're right of course. But for "me"... that sort of thing wouldn't be intended to prevent the need for some type of manual intervention, rather than to just make shorter work of a task that I've already decided to handle by manually syncing up my content to the backup drives.

Also, when working on ONE of the backup sets WHILE connected to the others - I'd probably like for renames under one of them to be echoed on the backup data sets in the other 2 backups, so... REAL-time mirroring of rename operations as opposed to replaying a series of events later from some log recording.

Anyhow - just my two cents on tbones suggestion... it'd be something I'd likely use for myself in a few scenarios.