I think there are other ways to control sending certain events to things like newly opened windows - so maybe this redundant - but sometimes I'd like to be able to invoke a layout and have 'things' happen.

Giving a per layout ability to run a user defined command like we have with various launch options (desktop, taskbar, startup, etc) would fit the bill: 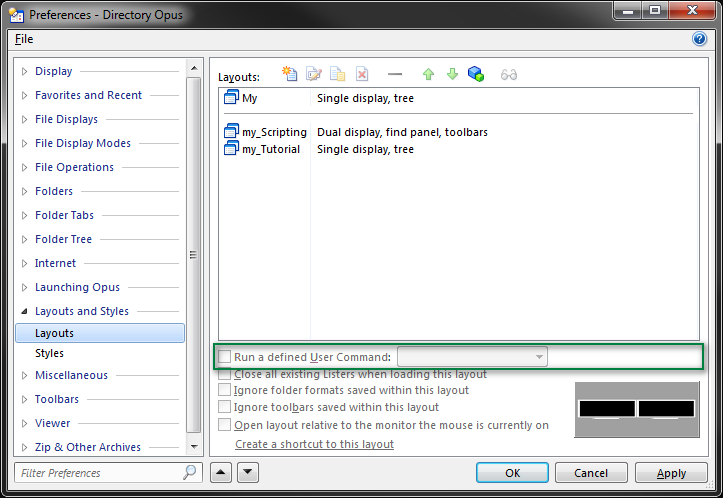 Why not a user command that invokes the layout?

Hmmm... I haven't played with some of the controls from when we were launching new windows and sending commands to them. Maybe it's redundant... but it was also to let layouts launch actions when opened via standard means (Layout Menu on Desktop, etc).

Scripts could do this quite easily, using the Lister.layout property.

Thanks Leo. Not sure how I'd use that though... chicken / egg thing maybe? I'm looking for a layout to invoke a script (via a user-command) when it's launched. Doing anything with that property assumes I've already launched a lister - after which in the yet-to-be-determined-way of invoking the script which is what this request is based on, once in-script I could certainly decide to do different things depending on the name of the layout.

But running the script on top of a new lister is the ask here. Closest I can come is probably using Embedded commands... that was the thought behind calling my request possibly 'redundant' earlier - I just couldn't remember what you called that feature

. I could front-end the different ways I load layouts with a user command as a 'launcher' that runs embedded commands against the new layout, but that wouldn't affect the built-in ways of loading layouts (again, desktop context menu, jump list, taskbar icons tasks, etc).

Not a huge need... just something I found myself missing recently.

The script would run via OnOpenLister, look at whether the lister came from a layout, and do whatever it wants based on the layout name.