[Temporary workaround is here. Linking from the root post to help people find it. --Leo]

I have been using Directory Opus for many years (and the Amiga version back to the 1980s), with no problems.

Presumably this must be caused by a change in the Windows O/S, but I thought I had better let you know because it is expected that a new update for Windows 10 will be sent out to all users in the beginning of August and you won't want every user emailing you.

Please zip and email the crash dumps to leo@gpsoft.com.au and we will take a look into what's happening.

When I got up this morning had the latest build of Win 10 and Opus had the sane error message open as above
Have attached my MiniDumps
DOpus.Minidumps.zip (68.5 KB)

It seems Microsoft have not put debug symbols for the Windows beta on their symbol servers, which means I can't see anything at all from the crash dumps, unfortunately.

Since they provide Windows betas to find out if there are bugs and compatibility problems, it's probably worth reporting the issue and sending the crash dumps to Microsoft as well.

Have reported in the Feedback Hub

I am getting the same issue with the latest build of Windows 10, Build 14376 and have also reported it to Microsoft via the Feedback Hub.

I don't know if this will help or not but here are my 4 dmp files from the times DOpus caught them. Maybe it will be different.

Same problem with those dumps, I'm afraid. But thank you for sending them; it was worth checking a second set.

From a quick search, Windows 10 Build 14376 seems to be causing problems for a lot of people (unrelated to Opus) who are also saying they did not have issues with the previous builds, so I suspect the build itself may be a dud.

(OTOH, maybe those kinds of threads can be found for every Windows insider update and people are misdiagnosing things, which is always possible. I don't track the Windows insider feedback enough to know if the feedback I found for this build is atypical.)

Just upgraded, and I'm sad to report the same issue with build 14379.

Please report these bugs to Microsoft.

No sure what to report--none of the major forums are reporting frequent issue of any sort. I have several major and minor apps open, but Opus is the only one crashing. And it only happens infrequently when I'm not using it.

It's a beta version of Windows which Microsoft specifically want you to provide feedback on. I don't understand the reluctance to do so.

I'm not reluctant at all -I mean I can't reproduce the error and to tell them I get random 0xc0000005 error in only one program isn't much to go on at this point.

It's their job to track down the problem, all you have to do is report it.

Build 14376 totally fixed the intermittent issue for me. Test every Opus feature / setting window I could think of--no issue.

Sorry yes. And several hours later I had one fault browsing through a unc folder on a 2008 r2 server. I'll report that--falls in line with other Windows 10 IP users having intermittent File Explorer crashes & unc.

Submitted--am I reading this correctly? 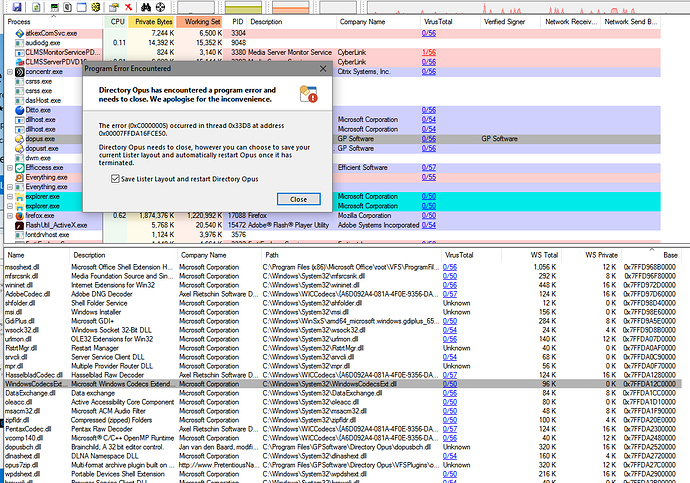