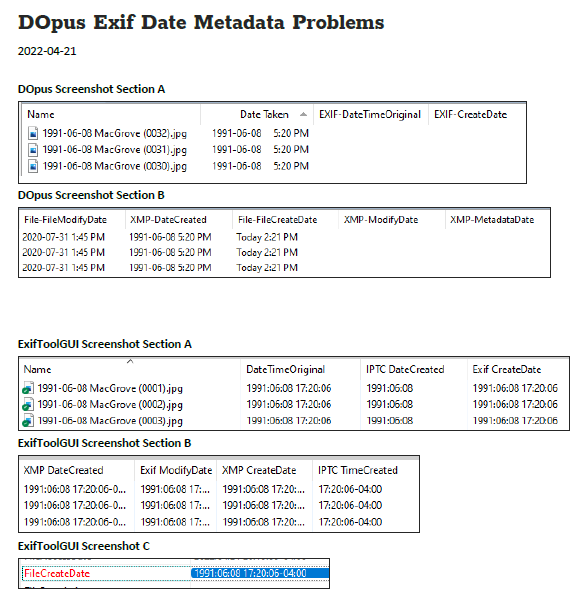 Can you zip and upload an example image?

I could, but I suggest you test it yourselves by stripping metadata from a photo and then then adding back metadata bit-by-bit. You will be better able to analyze the results if you know the file's exact metadata history.

I am 100% certain. One reason I use Adobe Bridge when dating scanned photos (or photos whose metadata has been stripped) is because I can easily view metadata in the Metadata Panel. In Adobe Bridge Preferences, one can select the fields one wants to be visible, and I have mine set to display many different fields including Exif Date Time Original (EDTO). When a file's Date Created is changed, the new date is populated in the EDTO field, the IPTC Date Created field, and 3 different File Properties date fields. Understanding and working with photo date metadata is critical to my business.
After dates are added w Adobe Bridge, I open ExifToolGUI use commands I created to copy the EDTO to even more date fields. That ensures that the desired date is read by any software.
I could use Adobe Lightroom Classic for the same task, but it's extra work to do that unless I already have a client's photos in an Adobe Lightroom catalog.

UPDATE: The files do now show an Exif Date Time Original field in DOpus, but that field was populated only after I shut down and then re-started my PC. Yesterday I did close and re-open DOpus in the hope that that would help, but it did not. Regardless, I shouldn't have to re-start my PC to get the EDTO filed to populate.

Is this about columns Opus itself generates, or ones that come via the ExifTool Custom Columns script? Or both?

So this is a script column that uses an external tool to extract the metadata? It's not really anything to do with Opus then, is it?

Why are you asking me?
I obtained the script thorough this DOpus forum. There is no clear indication that this is not supported by DOpus. I do use plugins with other applications, and I download those plugins from websites independent from the applications site, so It's very clear the plugins 3rd party / independent. Those plugins also have independent info and support.
Maybe it's a problem with the script, or maybe it's a problem with DOpus not refreshing when changes are made - but that's just a wild guess.

But you must know that ExifTool isn't something that we publish, right? It's a third-party tool. Surely that is obvious.

How must I know that? It is not obvious, though I did assume as much. It is not stated (not that I've seen, anyhow). Also, since DOpus developers respond to questions and comments about it in this forum, that implies it is supported by DOpus. If I were to contact Adobe support about an issue involving a plugin, I would be told to contact the plugin's developer.
Who should I contact about this issue?

How must I know that? It is not obvious

You presumably downloaded ExifTool from www.exiftool.org, which isn't our website and has no connection to us. Unless you assume we made every piece of software on earth, it should be obvious we didn't make ExifTool.

The script which talks to ExifTool came from our forum, but was posted by a user. We may be able to help with user-made scripts but we aren't experts when it comes to most of them.

I don't know if the issue is in ExifTool, or the script, or something else (e.g. some other script or metadata DLL might be taking a long time to process an earlier file, which could cause a backlog in the background threads that request and generate metadata). If the problem happens again, those are things that can be debugged by testing if the script is actually being run and, if it is, what the inputs and outputs are when it calls ExifTool in turn.

I have had ExifTool on my PC for a few years - long before I even heard of DOpus. Many photo management applications have ExifTool integrated into the back end.
It seems like you're saying you can't help. I am not a programmer and do not know how to debug script. Should I contact the person who posted the script?

The ExifTool Custom Columns script was created by @lxp, who, while not a Directory Opus developer like Jon and Leo, is an advanced used. Most of us write our questions about the scripts on this forum in a reply to the script thread. In this way, the original developer of the script is alerted and they can help answer questions and solve problems. Leo and Jon regularly jump into those discussions to provide further insight if it's warranted.