In Windows 8.1 Professional with the 13 January 2015 "Security Update for Microsoft Windows (KB3021674)" (support.microsoft.com/kb/3021674) it prevents Directory Opus from being the Explorer Replacement when you Double-Click on Folders in Windows Explorer. It also prevents the "Open in Directory Opus" from being shown on the Context Menu when you Right-Click on a Folder in Windows Explorer.

I can't replicate this here with that update installed. Maybe try a reboot?

As soon as you go to: Control Panels => Programs and Features => View installed updates => Uninstall "Security Update for Microsoft Windows (KB3021674)" => Reboot the Computer - Directory Opus can be the Explorer Replacement again and "Open in Directory Opus" shows up in the Windows Explorer Context Menu.

Can anyone else confirm this? I have that update installed and am not able to replicate either issue. 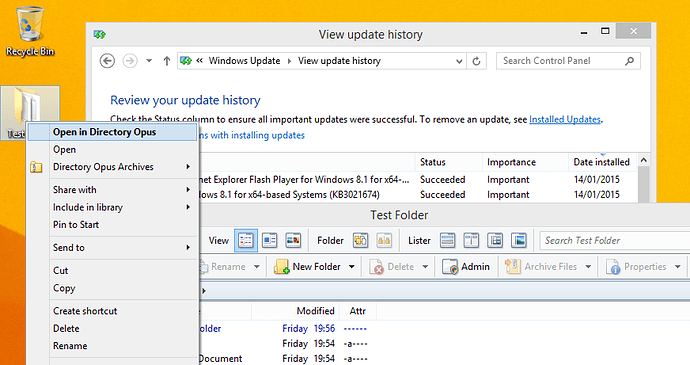 I've found it might be something with my Computer - though strange Directory Opus only stopped working as a Windows Explorer replacement this morning when I did the Second Tuesday / Wednesday of the Month Windows Updates. And works correctly as a Windows Replacement when I Uninstall "Security Update for Microsoft Windows (KB3021674)" from 13 January 2015. 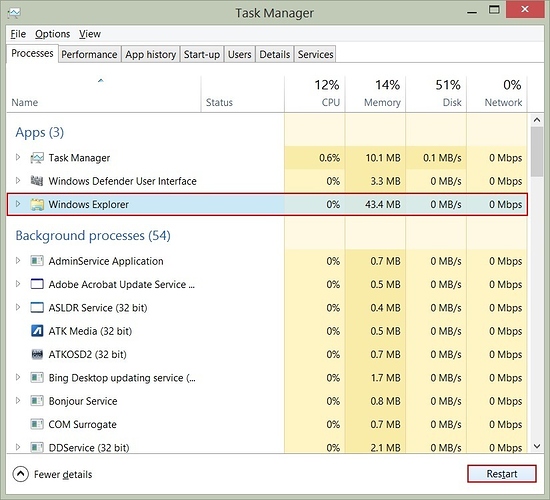 Before you restart Explorer (i.e. immediately after boot up), is it (explorer.exe) running elevated or with different credentials?

(you can find out if it's elevated on the Details tab in task manager, by adding the Elevated column to the display)

On Windows Start (before any Files, Folders, or Programs have been started by the User) both Windows Explorer & Directory Opus are Not Elevated. The Account I'm logged into the Computer with is an User Administrator Account. 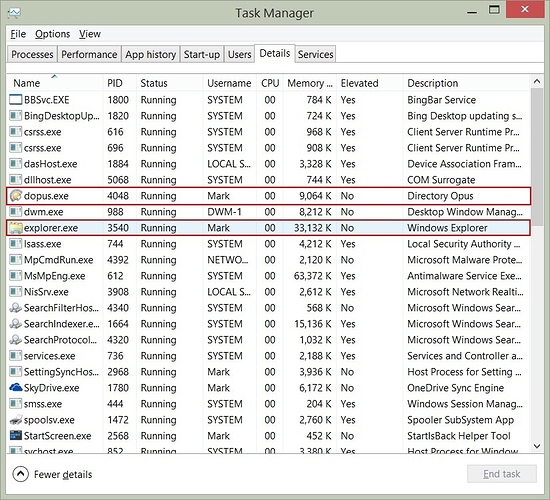 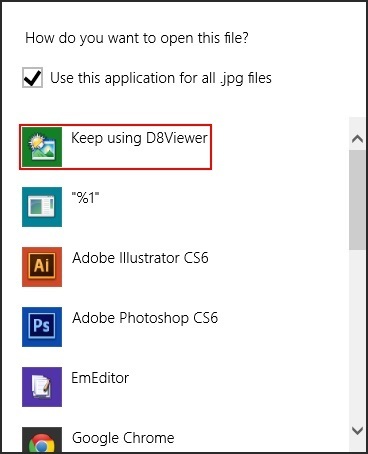 It was a long shot. I don't have any other ideas immediately unfortunately.

Can anyone else confirm this? I have that update installed and am not able to replicate either issue.

Since Jon asked, I decided to check.

After dusting off the old icon and adding oil to its gears, I opened Windows Explorer. Already disgusted at how dumb and useless this old friend has become, I had to remind myself of why I was using him once again. Went to my Downloads folder and right-clicked on a folder. Low and behold, my "Open in Directory Opus" was missing.

Opened Directory Opus 11.10 to make sure my Explorer Replacement was still turned on. It was and was set to "Replace Explorer for all folders".

I then checked my Windows Update to make sure I had the KB3021674 update installed. I did. Uninstalled KB3021674 and rebooted. Opened up my old disgusting friend once again to find "Open in Directory Opus" was still not there.

So I decided to disable the "Replace Explorer for all folders", Save and close Preferences, then turn it back on. Disgusted that I had to touch this Windows Explorer icon one more time, but knowing I had to finish my task I set out to do, I once again went to it's hiding spot and touched it's icon (yuck). This time, "Open in Directory Opus" was there.

Now that "Open in Directory Opus" is back in my sick old friend, I reinstalled the KB3021674 update, and rebooted.

Again, opening the useless Windows Explorer, "Open in directory Opus" was still there.

No idea when I lost my "Open in Directory Opus", but it doesn't seem to be because of the KB3021674 update.

Thank goodness that task is over! Anyone know how to wash off ones cursor?

"Security Update for Microsoft Windows (KB3021674)" is in response to a Windows Vulnerability that Google reported to Microsoft on the 13 October 2014. Microsoft had 90 days to fix the problem before Google reported the issue Publically (technet.microsoft.com/en-us/lib ... 5-003.aspx) - 92 days after initially been notified about it.

I've narrowed this issue down to either UAC (User Account Control) or User Accounts.

Workarounds to make Directory Opus work as the Explorer Replacement on some Windows 8.1 Pro Computers with "Security Update for Microsoft Windows (KB3021674)":

More information on this issue.

2 more permanent solutions I've found (when you have the latest Windows Security Updates & UAC enabled) are:

Method 2 (Recreate UsrClass.dat which is User's File Associations and located at the following Registry Locations: HKEY_CURRENT_USER\Software\Classes (HKCU\Software\Classes), or HKEY_USERS<User_SID>_Classes (HKU<User_SID>_Classes) - the main negative of this approach is it resets some of the Users File Associations [i.e. a JPG being opened by the Directory Opus Viewer]):

So far you seem to be the only person affected by this, so I'm still not convinced it has anything directly to do with the windows update in question. What other software do you have installed? Have you tried disabling your anti-virus software?

On my Computer I have heaps of programs - so I don't want to go through Uninstalling Programs & Reinstalling to find out what the issue is. So I setup a Hyper-V Virtual Machine to diagnose this issue, and just had the following programs installed:

The only Antivirus Software I have is the built-in Windows 8.1 Defender.

I can confirm this. Opening desktop folders with Dopus is disabled out of nowhere. I tryed re-enabling it from Dopus (Although it was already.) And re-installed it with 11.5 version (older was 11.4 anyway but gave a try.) but the problem wasn't solved. Then I removed mentioned update and it is working with out problem. Win 7 x64 here.

That update seems important but one needs to log on locally to use this exploit as it is described in the KB. So if you are the only one that logs on the PC, removing it may not be a problem. But you may consider to fix it since one eventually will install it.