Apparently the Windows command line does not support unicode ... still ...

Ignoring the failure that is the Windows command line, you could use Opus's built-in Print Folder tool to get a similar output. Set it to use Flat View -> Grouped, within the Print Folder dialog, and make it output to a text file or the clipboard.

Yep, I used this way before. I was hope to get much better way to generate such file lists with this buttons.

Sadly the command doesn't work for me. I use windows 7, Could anybody please check if that could be the problem because. I read the thouroughly the instructions of ken alcock but i can't get the usercommand to work. Please help

yes i read that topic. I did everyting in the readme file. but when i press at the button when im on a folder it doesn't do anything. What am i doing wrong?

Btw i have "edit pad lite" as default txt handler. Could that be an issue?

Sorry, my link is same that early posted by Leo.

Will back with working solution next time

I use this one, works fine here :

Don't work for me. Nothing happened after pressing this button. Selecting or not selecting dir doesn't change anything.

So... OpelOpus and striimii... you both say that "nothing happens" when you press the different buttons you've each tried (there's a few different suggestions here eh)?

@ striimii when using Devilders button, you should AT LEAST be getting a DOS window popping up for a second - followed by a text file being created in the current folder based on the name of the the folder you've currently got selected. Have you copied the button properly? The commands being run are about as basic as you can get on windows of any version (dir command)...

@ OpelOpus... with the more elaborate button from Ken I suppose there are some more things that could go wrong, there's an OS version check in the beginning that may be causing it to run strangely on Win7. Not sure... does the TREE command work for you from a console prompt?

To both of you, I don't think I've seen either of you mention what about the Opus Print Folder method doesn't also do something useful for you...?

There's a fix in Opus 9.5.3.0 (released today) which may be relevant to Devilder's button:

When Opus writes filenames to a DOS batch file (via a DOS batch-mode button), it now uses the codepage specified by the @codepage directive (if any) rather than the ANSI codepage.

BTW, looking at Devilder's button I think it needs @nofilenamequoting at the top because it's adding the quotes explicitly and files with a space in them will get two sets of quotes otherwise.

@ steje: No DOS windows appeared while Devilders button work. Yes, I sure that button pasted correctly. Checked twice. If I open DOS Promt and try execute dir command with params it work.

Did you paste the button correctly?

Yes. I checked all twice. All are correct.

...what about the Opus Print Folder method doesn't also do something useful for you...?

Devilders button does seam to work. but very rearly. I cant figure out whe it works and why not other times. When it works sometime it has a huge lag though,

Anyhow, Kenneth alcock''s button used to work on vista when i used the click of the king's theme. I had the whole hardisk exported within seconds to notepad. It must be related with using windows 7 i guess.

Anybody else having this problem on win7 x64 ?

I was just wondering what about the "Print Folder" function built-in to Opus...?

The printfolder option works just fine. File>tools>print folder. But does the print folder window have an option to export only folders. I cant find that. 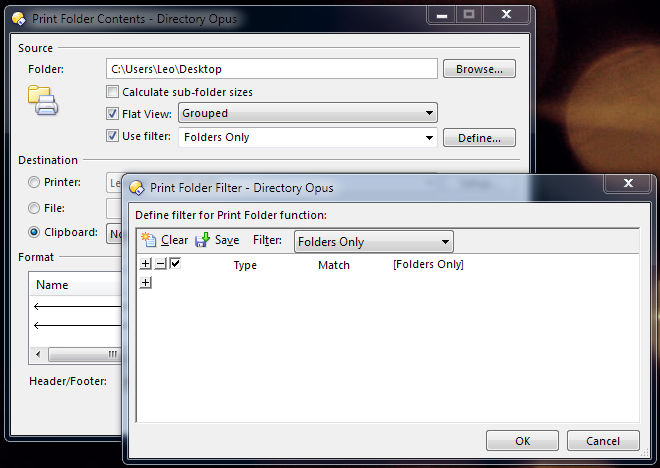 Ah great this is great leo.

Thanks again for the help.