Recently started having the file file picker hang with some programs upon opening. Weirdly not all programs but happens with Chrome and Windows 10 Instagram program.,..for example. I can't be sure it's directly connected to the latest beta; but going back to the last non beta version made the issue go away. I was using the previous beta version before the update and the issue didn't exist then either. Could be a user issue, but I thought I'd mention it

Please try installing the new beta again and reboot after installing it. Does the problem come back?

If it does, when exactly does it happen? e.g. When the dialog opens, or when you double-click a folder within it?

Does the problem go away if you disable Listary, as a test?

Ok..downloaded the beta installed it and rebooted. Made sure I had the beta installed. With Listery running I went to the Twitter sight and tried to change my avatar pic. Clicking on pic/camera icon brings up "Open" dialog box to load image. No problem here.

Opened up Chrome to change avatar. Clicking on it in upper right hand corner of browser brings up window allowing you to upload. Clicking that brings up same "Open" dialog box but file area is blank and dialog box becomes unresponsive. Area to left with drives and directories is not blank.

Same thing happens with Listery turned off. I paused the Listery service, rebooted and then quit Listery from taskbar. Don't know why it was still there as I could not find it anywhere in startup. Weird it happens in one case but not the other. Also happens in Windows 10 Instagram app.

Opus can't affect the behaviour of the file browse dialog in other programs.

Cept seems to happen with the new beta installed. Didn't happen with last beta or official version. If it's not Opus; it's some weird combination involving Opus and one of more programs on my system

To add more see image. I forced quit the Instagram program and was left with this. That is the "Open" dialog box of course. With Chrome though I see just a "Google Chrome" and an "Open" under it not responding. 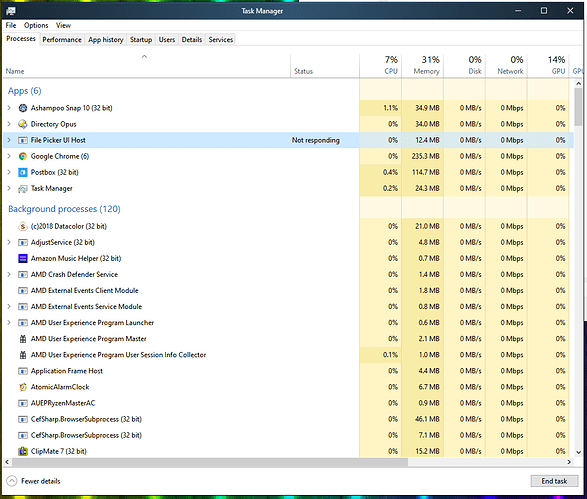 Does it only affect Chrome?

Chrome does some unusual things to block other DLLs from being loaded into its processes (which in turns makes Opus even less likely to be involved), as well as to isolate parts of its UI (like that dialog) from processes for the browser itself.

Listary probably may interact with those dialogs (that is its purpose), and in turn talks to Opus. So it's possible Listary is hanging, maybe because of something which changed in Opus. (Can't think what, but it's possible.) I don't know how Listary works exactly but if it has both services and a UI process, it might make sense to uninstall it completely as a test of that. (Then install it again once done testing.)

Strangly enough yes. (and the Instagram app) If I go to Twitter and Instagram sites in Chrome and try to change avatar prompting Open dialog box...no problem. If I go to Gmail in Waterfox and do the same, Open dialog box opens without a hitch. This is with Listery off but I have no reason to believe it will not be the same with it on. So this is some weird issue involving a specific set of circumstances with work arounds. So maybe..."never mind"