Just an odd little glitch, nothing major, but...

When I've selected a bunch of files to do a wildcard rename on, after the rename and closing the rename window, some of those selected stay selected, some do not. I move them after renaming, so I have to remember to reselect them all.

This happens in 12.21.3, and in at least the last few previous versions. 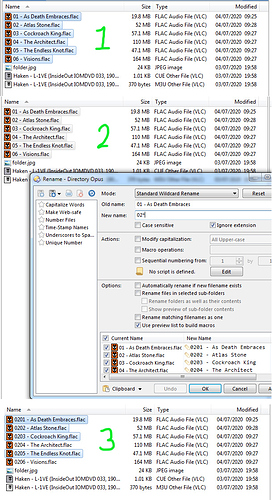 Is the destination a network drive? If so, what kind, and do you see the same problem on a local drive?

Are you running Kaspersky by any chance?

Yes, a network share on a Synology NAS. No Kaspersky (or any AV at all). I'll try on a local drive...

Hmm.... When I'm working the glitch seems to happen more often than not. When I'm trying to reproduce it however...

I could not reproduce the glitch on a local drive, after 20 attempts. The same 20 tries on the network share got 4 repros of the glitch. It is completely (seemingly) random which files end up staying selected.

For one of the attempts that fails, could you see what the debugging mode mentioned here outputs, and let us know the log output and which filename(s) which were deselected?

Here's a zip of the logfile; I've cut out the start because it had a lot of stuff about my mailboxes in there, but I think there's everything you need. I saw the notifications get logged. Starts at around line labelled 804 I think. Also included is a jpg of the files selected after. All files were selected to start with.

There is a clear difference in the log for those that are deselected. Starts at line 833.

They show a change removed and change added, instead of ren_old and ren_new.

That is quite strange. It looks like, for some reason, the NAS is sometimes reporting that the old file was deleted and a new file was added, instead of that a rename happened. I don't know why it would do that, but it means there is nothing in the notifications to connect the old file to the new one.

Sometimes you can update the NAS firmware (sometimes also the client-side software if there is any, although that less common and not used/needed by a lot of NAS) to fix issues like that.

If you open the same folder in File Explorer and select all the files, then do the rename in Opus, do you get the same results there, in terms of what's left selected afterwards?

Aye, I'm not surprised it's the syno being odd; it's not the first problem I've had with it.

I had completely forgotten until just now, but I did once find out about a bug in one of the linux libraries that they use (I think), that they refused to fix because 'it works in Explorer, therefore it works' even though it doesn't in many other programs. Like my music player, foobar2000. Similar issue with change notifications.

Nothing you can do then; all I can do is buy a better NAS next time.

This is one reason I use an old Windows PC as a NAS. Not that Windows doesn't have its issues (especially lately), but there are fewer surprises like this. You also get certain features like copy offloading (disk to disk copying without hitting the network) which no non-Windows NAS support to my knowledge.

Price isn't that different, either (or it's free, since the PC was already owned). And you can have a case with decent airflow that actually cools the CPU and HDDs, as well as easily replaced off the shelf components (depending on the type of PC, of course).

But I seem to be unusual in this regard!

One strange thing with some NAS vendors is they seem to have different bugs and quirks in different devices, sometimes with old bugs resurfacing in new products after they were fixed in much older ones, or only affecting a new product but no others. It's odd to me as I would have assumed they'd base their products on software that would be very mature by now, but it feels more like it keeps being rewritten, or at least modified, at a low level. (I don't know if that is actually true. It's just how it looks in terms of the bugs that come up every so often from certain vendors. With things that use Samba, rather than something proprietary, there are also a lot of variables in how it's set up, which is slightly different.)

A lot of the problem is how complex and poorly documented SMB is, but not much can be done about that.

Agreed - I used to run an HP ML110 server, mostly for NAS and occasionally testing VMs out on before deployment. When the mainboard died and I no longer needed to do the VMs, I decided to replace it with a standalone NAS for quietness and lower power.

First it was a WD NAS, which was awful but didn't have the change notification bug. When I needed something bigger I bought the Syno, which is much better than the WD, but has this bug. Can't win.

When my two Synos die, I'm going back to a PC NAS. Like you say, it's free, and it works.