File types not supported by viewer

Is it possible to change DOpus' default action when attempting to view file types not supported by the viewer?

I have a number of directories that contain a mixture of documents in txt, doc (supported) and rvf (not supported) formats. When I scroll through them and highlight an RVF file, the viewer just says "file not loaded due to unprintable characters", whereas the logical action for me would be to call the default OS viewer.

I have searched through these forums but there doesn't seem to be a viewer that supports RVF files...I love DOpus, but for its premium price I'd argue that the viewer should be supporting every text and image file type under the sun (within reason).

As a benchmark, Total Commander does have a plugin to view RVF files...

(for those who don't know, RVF is a rich text format generated by some text editors (using the TRichview components) -- I use AM-Notebook which generates RVF files).

the viewer just says "file not loaded due to unprintable characters"

That error message comes from the 3rd party Source Code Viewer plugin which does the wrong thing with files it thinks it can view but later realises it can't. It should allow the file to drop down to the Text plugin which will show the file as text or hex, depending on whether it contains binary data.

whereas the logical action for me would be to call the default OS viewer.

Is there a viewer provided by the OS for RVF files?

Could you provide a sample .RFV file?

Also, can you view .RVF files in Internet Explorer?

If not then there may not be a system viewer for the format which Opus can use, unless .RVF is just another name for .RTF or something like that.

I appreciate the quick response, Nudel. No, XP doesn't provide a native viewer for .RVF, and you can't view the files in IE.

.RVF is very similar (in formatting capabilities) to .RTF, but better -- for example there's no massive file size bloat when you add images. .RVF is the native file format of the RichView components (http://www.trichview.com/).

I currently use the Universal Viewer (http://www.uvviewsoft.com/) to preview .RVF files. Universal viewer is an alternative to Total Commander's official standalone viewer. Both use the .RVF plugin (latest version available at: http://www.trichview.com/forums/viewtopic.php?t=2333).

I have attach a sample RVF file. The contents read as follows (starting with the word TEXT):

This is a sample file

Looks like RVF is a lot more than a rich text format... You can build user interfaces out of it by the look of it, for example.

There's a library, which is good, but it's aimed at Borland Delphi and Borland C++Builder, neither of which I am familiar with. You might have to convince somebody who is to write a plugin if you want to be able to view those files in Opus. (Or convince the RichView people to make an ActiveX control, which would mean their format could be viewed in IE as well as Opus, which seems like a good thing to do if they want people to use the format.)

Great news, Sergey. Many thanks.

Hello from Texas:
I am starting to evaluate DO 9.1 and I am impressed so far. Questions: are there any plug-ins to view (in DO) Corel/cdr, ACDsee Canvas/cvx and Adobe Illustrator/ai file formats? I am interested in Corel and Canvas because of image archives and Illustrator because of present and and continuing heavy use. Is anyone working on such plug-ins?
Any info would be greatly appreciated as the ability to view these image formats would be making DO 9 a must-have for me.

Try putting them under Internet Explorer first and if that doesn't work remove them from that section and try Generic ActiveX instead.

This is assuming that you have the products installed and they provide an ActiveX viewer and/or IE plugin for viewing their formats. If not such things may be available as separate downloads and, if they exist, should work in Opus via the ActiveX plugin.

Thanks so much for your prompt response. I must be missing something. Per the attached file, those are the dialogs I see via Settings-Preferences-Plug-Ins-Viewers in DO. Please set me straight. 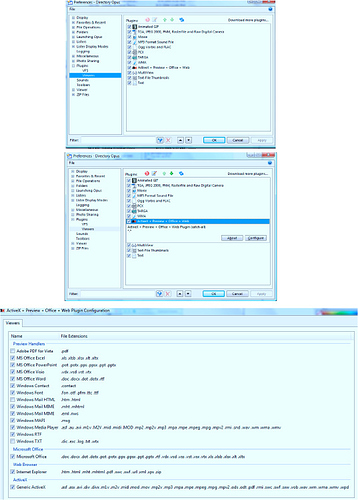 If that doesn't work, remove the extensions from the Internet Explorer line and try adding them to the Generic ActiveX line instead.

I followed both of your suggestions. Unfortunately, neither the Internet Explorer nor the Generic ActiveX line allow me to add anything as the Add boxes are greyed out. Removal of items is possible. Running DO as Administrator does not produce any better results.

You have to type an extension before the Add button becomes available.

Selecting either the Internet Explorer or the Generic ActiveX line allows me to select any file extension in the box to the right and enables me to remove any of the existing file extensions. However, I am not able to type anything into that box.

See the screenshot below: 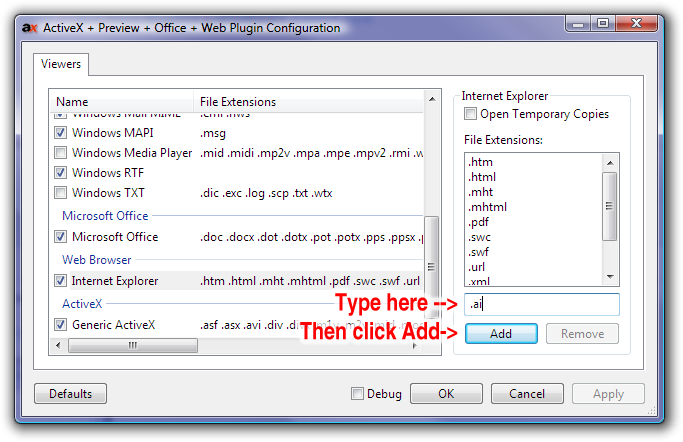 It worked and I am able to view Adobe Illustrator files and that is very helpful to me. I have one other question: as I travel, I would like to install DO on my HP notebook computer in addition to my work station. Can I do this without violating any licensing agreemants?

Thanks for your help,
Wolfgang

When you purchase a single install licence of Opus you also get a free laptop licence for personal use as well - so yes, this is fine.