These scripts are tested but not guaranteed, they are still being tweaked.

If you would like to try them please test against temp folders first. Feedback is welcomed.

These scrips perform some clean up tasks. Some of these have been written before by others as buttons. Using the new script support should mean that caching of selected files should mean less erroneous changes. 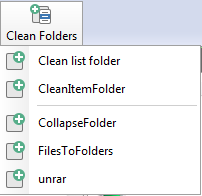 CleanItemFolder
Makes some assumptions about what to do based on this being an item folder.

FilesToFolders
Move each file to a folder of the same name excluding extension
c:\a.txt --> c:\a\a.txt

Button to toggle debug output when the other buttons run (toggles the $glob:debug global variable):

I'm working my way back into the scripting world, hoping to try to extend the limited functionality that several people wrote for me last spring. I realized that while I looked at your script last spring, I never dove deep enough into it to truly understand what it was designed to do or how it would actually function. So, I'm wondering if you've done any further development on this script or if you can help me understand how it works. My goal is to use something like this to clean junk out of my \Music folder as I work on renaming and moving music files.

I have updated the script to 1.0. There are many improvements and bug fixes.
Of note this version displays a progress bar as the Clean up List is running.

@MSWallack have you had a chance to look over the script? That would be the best palace to start. If you have any specific questions or get stuck let me know.