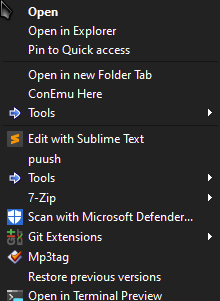 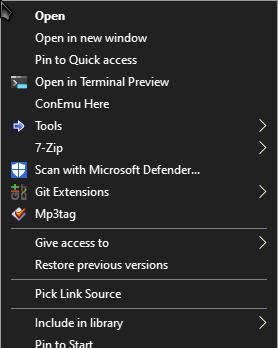 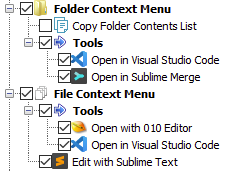 As an aside, is there anything I can do to change the order in which Directory Opus shows the context menu entries? I would really like to have e.g. "Open in Terminal Preview" next to "ConEmu here", just like in Windows Explorer.

It doesn't in general, or you'd see a lot of inappropriate menu items when right-clicking folders (and we'd have hundreds of similar reports).

Can you give more detail on how Easy Context Menu is adding those menu items, and how it restricts them to files or folders? Are they ones you configured yourself or ones that are built into it? (It sounds like a tool for editing context menus, but I am not familiar with it.)

I've created these entries myself, but the same happens with entries added when installing an application (e.g. the "puush" entry).

The file/folder distinction happens based on where the registry key for that entry is created.

There is also HKCR\Folder\, but I'm not completely sure what kind of distinction windows makes between directories/folders.

You're right, we were adding HKCR\* items for folders but they should only be added for files.

We'll fix that in the next update. Thanks for letting us know!