I've purchased both opus 10 & 12, however i went back to 10. 12 was just a bit too different and finiky for my liking. i decided to bite the bullet and upgrade win10-11. And i have now lost folder previews, which is a major must for me. i know it was disabled as a win11 feature. and it needs to be re-enabled in win11 explorer. however doing that does nothing for opus. So how do i turn this feature back on please

Do you mean folder thumbnails?

If those work in File Explorer, they should work in Opus as well.

You can also configure Opus to generate the thumbnails itself, instead of relying on the Windows Shell, if you wish. (This was needed with Windows 11 last time I checked, as Microsoft still had not added the feature back, but maybe they added it recently. They said they planned to some time ago.)

The relevant settings are here: 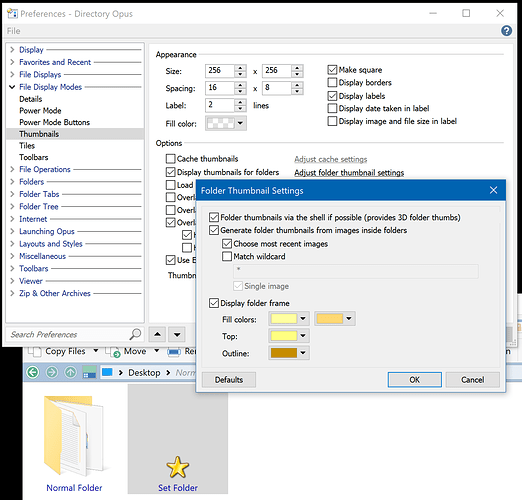 Turn off "Folder thumbnails via the shell..." if you don't want to rely on the Windows Shell for them.

Also make sure "Generate folder thumbnails from images inside folders" is on (it should be by default).

(You may also want to first try emptying the thumbnail cache, if the shell folder thumbnails are working in File Explorer but not Opus.)

12 was just a bit too different and finiky for my liking.

Opus 10 was not designed for Windows 11, since it came out many years before Windows 11 (or Windows 10, for that matter) was even a thing. I recommend using Opus 12 if you already own it and are also using Windows 11.

If you have issues with Opus 12 vs 10, they probably just come down to configuration settings which we can explain how to change if you give us more detail. (Please start a new thread for those, if you need help with them.)

i'll try 12 again. but yes the added the folder preview back in again.

How do you turn that on? It still doesn't work in File Explorer on my Windows 11 machine, at least by default, and it's fully up to date. (No Insider Builds or anything like that, though.)

i think i'll be going back to windows 10. open explorer. look for the 3 dots at the top. options. click on view, the untick the box always show icons not thumbnails. but im telling you ive just checked and it doesnt work

Yes, I tried that but it doesn’t affect folders. Seems Microsoft still haven’t restored the functionality to Windows 11.