This is pretty much urgent, as I cannot use Directory Opus.

Currently when launching Directory Opus, it will start with opening a FTP server.
I need to enter a user id+pw there. One way or the other that does not work, contrary to Windows Explorer.
I can enter correct user-id/pw a dozen times, no way. However... I cannot close that login panel.
Cancel/close, it does not work. I have to kill it thru the task mgr.

Launching DO will again lead to opening the FTP-site again.

I started out with Windows Explorer, but once I want to download something, one way or the other DO takes over
and I am getting the login+pw window again and I am stuck.

[quote="mrwul"]This is pretty much urgent, as I cannot use Directory Opus.

Currently when launching Directory Opus, it will start with opening a FTP server.
I need to enter a user id+pw there. One way or the other that does not work, contrary to Windows Explorer.
I can enter correct user-id/pw a dozen times, no way. However... I cannot close that login panel.
Cancel/close, it does not work. I have to kill it thru the task mgr.

Launching DO will again lead to opening the FTP-site again.

I started out with Windows Explorer, but once I want to download something, one way or the other DO takes over
and I am getting the login+pw window again and I am stuck.

further to the above: so, once I have opened a folder on an FTP site, it will launch DO and problems start.
is there a way to AVOID Directory Opus opening a FTP folder?
(the session will then totally be handled by Explorer)

Can you show a screenshot of that login prompt? It doesn't sound like the built-in Opus FTP support if you can't cancel it and if Explorer shows something similar (since Explorer can't use the Opus FTP code, it's presumably something else).

am not sure whether it is helpful: the folder is located on an USB-drive. Files can be downloaded from it, as if it were a NAS.

I know it works fine: the first time I opened the drive, it was Windows Explorer all the way and I cud open the subfolders and download the files.
Second time, when clicking on the subfolders, Directory Opus was launched and I got these login screens that cud not be closed.
The Directory Opus I cud close, it was hidden behind other windows, but then the others those close anymore.

Thanks. The 3rd dialog there is an Opus one, the other two aren't. I'm not entirely sure what's going on there or why the drive is triggering an FTP connection instead of a network drive, but give this a try:

[ul][li]Right-click Opus on the taskbar and choose Preferences.[/li]
[li]Go to Folders - Folder Behaviour.[/li]
[li]Under Prevent automatic loading of certain types of folders turn on FTP sites and Network drives.[/li]
[li]Click OK then wait 10 seconds (this ensures the config is saved).[/li]
[li]Right-click Opus on the taskbar again and choose Exit Directory Opus (if that doesn't work after a few more seconds, kill it via Task Manager).[/li][/ul] 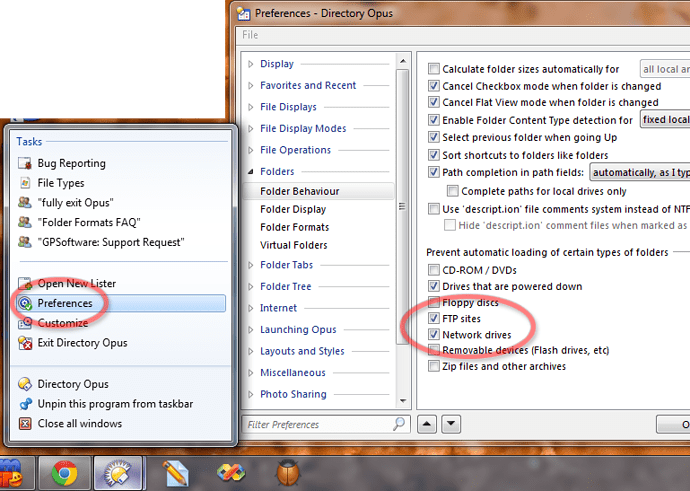 Very sorry, that won't work.
Did what you wrote (tagged FTP Sites and Network drives) 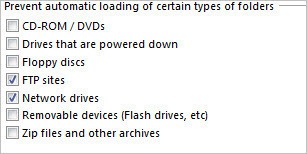 Apply, OK, waited about a minute.
Rightclick on Directory Opus on the taskbar, exit DO.
Waited another 10-15 seconds.
Launched Windows Explorer,logged into the FTP
Doubled clicked the folder, then again Directory Opus was launched. 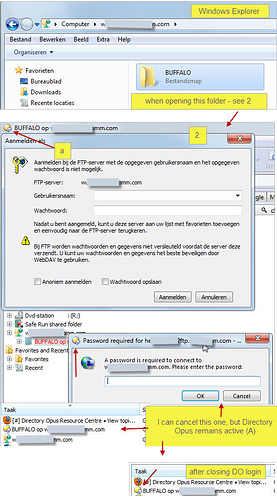 You may Directory Opus in the taskmgr.

oh, btw, it has nothing to do with network/ftp stuff in virtual drives?

oh, btw, it has nothing to do with network/ftp stuff in virtual drives?

Those just decide what is displayed. They won't affect this.

[quote="mrwul"]Launched Windows Explorer,logged into the FTP
Doubled clicked the folder, then again Directory Opus was launched.[/quote]

I'll try that - meanwhile I temporarily tagged "Donot replace Explorer". Everything works fine then, Explorer takes care of all.

I have now just set it back and also tagged Make Directory Opus FTP default handler.

After entering login and pw I see folders being displayed in the background, but I cannot get rid of the floating login-pw panel,
so I can't access the folder or anything else.

btw: I have reset the FTP preferences, waited some 30 sec, exited Directory Opus, waited and re-launched it (1st advice)
Each time the same issue, it gets me one user-id/pw login and one password-login (directory opus), see my last screencapure at the bottom.

Think it cannot be solved, let's drop it, I will use Explorer for this task.

But.. eh, my first question was:
-how to get Directory Opus NOT start with FTP thing
and ..

That is the last thing before I had to kill it, each time when I launch DO it will start this request.

any suggestions on the 2nd question?

Options for what is shown in the folder tree are in Preferences / Folder Tree / Appearance. You probably want to turn off the "Virtual (non-filesystem) Folders" option to get rid of that thing.

(There is also an "FTP Sites" option, but I don't think the item you are seeing is what Opus considers an FTP site, as that would be listed under a separate branch of the tree. It's hard to tell as you've cropped almost everything out of your screenshot except for the item itself, but the Kaspersky "Safe Run shared folder" item above it doesn't look like an FTP site, so I'm guessing that screenshot is not showing the FTP branch of the folder tree, and that item is therefore coming from a shell extension which is doing something weird. So its visibility will be controlled by the "Virtual (non-filesystem) Folders" option, I think. If not, please show a screenshot of the entire folder tree.)

Think there is not much further to see.

Have turned off Virtual (non-filesystem) Folders - it remains there. 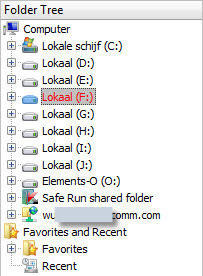 AFAIK there isn't a way to filter out devices like that from the Computer folder (at least without also removing them from Explorer, etc.).

Up front, I don't know of any solution, but nonetheless I do hope this will be 'fixed' soon. This morning, being still sleepy, I accidentally launched Directory Opus and obviously it launched the FTP request. As known, it presents two password windows, see my posting below (27 Aug 2012 11:01)

Please note that the 1st one is correct actually, a user-id+pw is required, not just the pw (the Directory Opus small password popup window below nbr '2'').

As said, when I cancel the Directory Opus pw popup, the nbr 2 remains active and can't be closed.

It seems to me they are 'under controle' of Directory Opus though.

Go to the processes 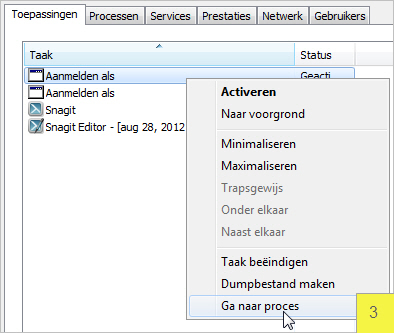 Go the the application 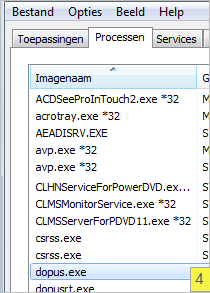 Under Preferences:
Under Miscellaneous -> Windows Integration

Frankly, I don't know what else to do.

As a last resort, after killing the process, I launched
f:\Directory Opus\dopusrt.exe" /CMD Go f:\temp from the cmd prompt.

It said that it cud not be executed as dopusrt.exe was used by another application.

Tried a few times...
Now what?
Launching DO will launch FTP
Above cmd does not work...

Killed Dopusrt.exe from the taskmgr.
It left me with a Dopusrt.exe of 0 bytes ... it cud not be launched.
Had to re-install Directory Opus.

During setup, an "Unable to quit DOpusRT!"-warning showed up, just clicked OK and setup went fine.

This is all info I have and really hope the issue can be solved.

(Sorry for this elaborate posting, but hopefully it may to pinpoint the exact problem)

under: Replace Explorer for all but the ftp folder, but that does not work.
when double clicking the folder from within Explorer, it will launch Directory Opus again,
and DO will get me the pw thing again.

I admit - it was just a wild guess and I was crossing my fingers that it would work.

The Help file says
"The Explorer Replacement options only affect what happens when some action causes a new folder window to be opened."

You might want to try the various suggestions in the FAQ on FTP in Opus if you want to try to get Opus talking to the device via FTP.

Depending on the type of NAS (or whatever it is), there may also be options for how it is accessed. e.g. You may be able to configure it to appear as a normal network drive instead of an FTP site.

Check the device's firmware as well, as we've seen problems with other Buffalo devices that were fixed by firmware updates.

About "Launching DO will launch FTP" and getting Opus to NOT start with the problem folder... Maybe you have the "update default lister automatically when closing a lister" option enabled? And each time you encounter the problem after double-clicking a sub-folder from Win Explorer launches Opus, then have to kill Opus - the default lister starting folder is being reset to this ~problematic NAS folder? If so - you may want to disable that option until this gets sorted out, as well as obviously making sure none of your layouts (default, user specified layouts, etc) are actually set to point to that location as the starting folder?

Besides that, the screenshots and the login prompts bother me as well... and what Leo noted about that entry being located under the "Computer" node in the folder tree definitely seems to scream out that the initial treatment of that folder might involve something not "standard", or otherwise at least not "expected by Opus".

Based on mrwul saying that disabling explorer replacement eliminates the problem with double-clicking from Win Explorer... it certainly sounds like Opus is being asked to treat it like a 'regular folder' based on normal Explorer Replacement rules (rather than explicitly as an FTP site). Whether by shell extension or some other means, I'll bet that the appearance of this path under the "Computer" node in the tree has more than just a cosmetic effect on how Opus is working with it... BOTH in terms of how it's failing to list the folder properly and becoming unstable, but ALSO in how you've been unable to "exclude" Opus from handling this path - which I think is still a good idea, but probably not working because the path being passed to Opus is different than the "ftp://" path you added to Prefs; making Opus unable to match it with anything in your exclusion list in order to say "I don't want to open this myself so I'll ask Explorer to open it after all" (paraphrased from Leo's explanation on how folder requestes are treated in Explorer Replacement mode).

...More curiosity than anything else, but - if you actually add this IP address and folder as an 'actual' ftp site in Opus FTP address book... does it work fine in Opus then? Apologies if I missed any comments on that already in the thread.