Getting rid of folders in This PC

I always click apply/ok when making changes, so yes did that
also i did a backup of the config file, closed out of DO and used task manager to kill any processes then opened again and same outcome. boooo i guess

Try navigating to another folder

opened D drive and went down to a file level then claicked THIS PC.
sadly the same outcome.

and used task manager to kill any processes

Don't do that. It could corrupt your config file, and will mean changes you made are not always saved at least.

but in passing we still have the original problem so wondering where we go with that.

also i would like to say that i do appreciate the promptness of your replies. there is another program i use that has glitches and when i post a support query it takes, in one instance x2 weeks to get a reply.

Looking at your first screenshot again, I noticed something I didn't before: You're in Quick Access > This PC. From a quick test of the same thing here, that will trigger what you're seeing. We will fix that.

(Opus isn't recognising that path as the special This PC folder, since it isn't in its usual place in the folder tree, so it's being treated as an unknown non-filesystem folder and delegated to the Windows shell. We'll fix it so it detects the folder properly when it's accessed via Quick Access.)

If you click Desktop > This PC, farther down the tree, does that one work OK for the time being?

leo, this might help you to understand where i want to end up with this issue. i have attached a screeen shot of a COMPOSITION of a couple of screens of DO. so this is a screen shot of a COMPOSITION, not an actual screen. ps i use a program called THUMBS to do this. ( http://www.cerious.com/ ). and yep i own a legal version too. 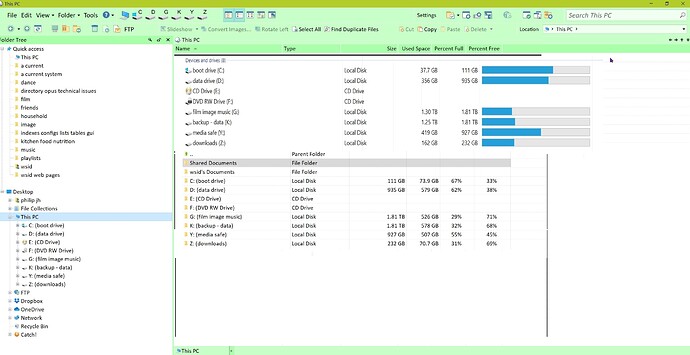 anyways this is how i would really love to be able to set up DO on opening. i know the top part of the screen is from QUICK ACCESS which seems to be controlled by windows, and the lower part is true DO. the LHS screen is pure DO. i dont mind is the x2 RHS screens are in the opposite order, ie blue bar graphs at the bottom but i prefer it at the top as shown.

so ultimately this is what im aiming for. maybe its not possible, maybe it is.

I thought we were talking about getting rid of the folders in This PC?

Could you confirm that that happens when you select This PC in the main part of the tree?

Looking at your first screenshot again, I noticed something I didn't before: You're in Quick Access > This PC. From a quick test of the same thing here, that will trigger what you're seeing. We will fix that.

That has been fixed for the next update.

hello leo
im loosing track somewhat of relating the issue i have. im including x4 pics which i think should be self explanatory.

clicking QUICK ACCESSS- THIS PC
i DONT want the upper window, ie ALL of system folders showing at all.

clicking DESKTOP- THIS PC is kind of aok but i would prefer to have the BLUE % FREE BARS. why because they give me an instant view of how much disk is free which is very informative and useful 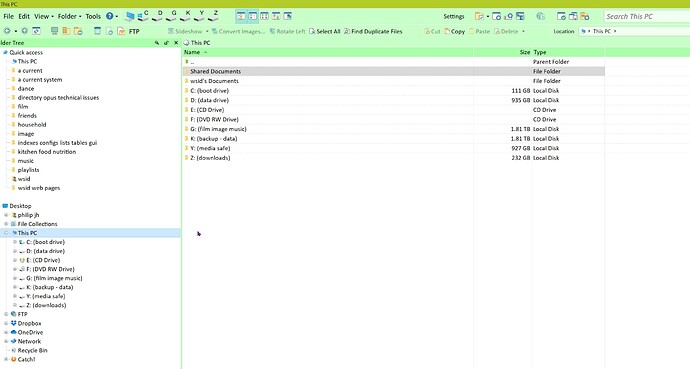 this is similar to 01 bt actually shewing the stuff I DONT WANT, both under QUICK ACCESS and DESKTOP 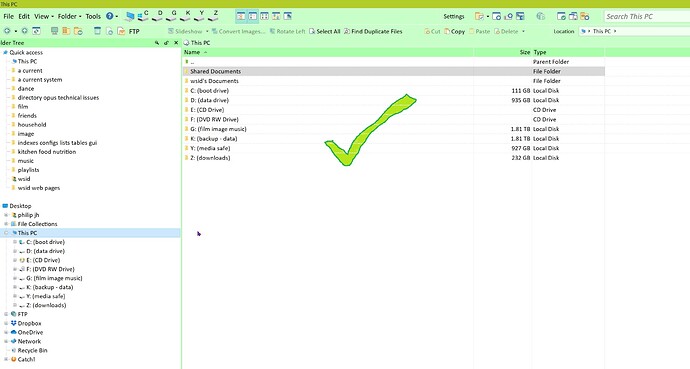 and finally the grand final, the bee all and end all, the day ABRAHAM ascended the MOUNT to commune with the LORD OF ALL REALMS........and the LORD sayeth, ABE DUDE descent the MOUNT, go forth and weep no more my good lad, for from henc forth your tears will be as the sweetest rain upon the orange blossoms.

so this is what i want for both QUICK ASSECC- THIS PC and DESKTOP- THIS PC. YEAAA 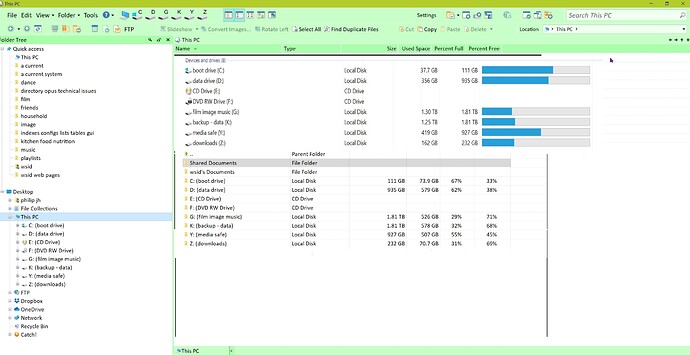 hopefully you will see what im trying to do

To get the blue bars back when you've selected Desktop \ This PC, 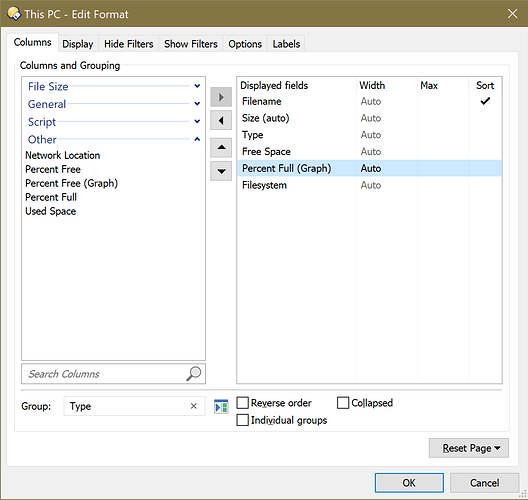 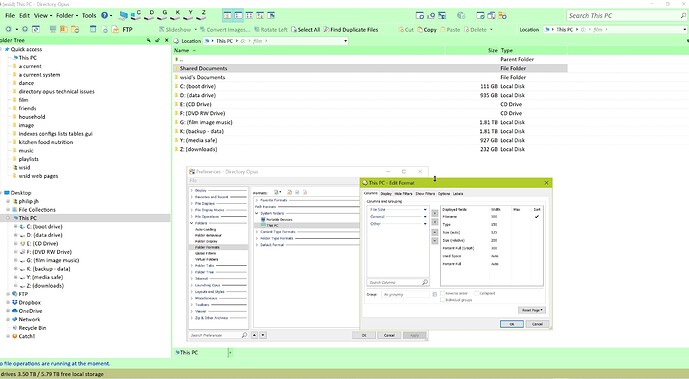 and got the same result as previous....>>> NO BLUE BAR GRAPHS![NO BLUE BAR 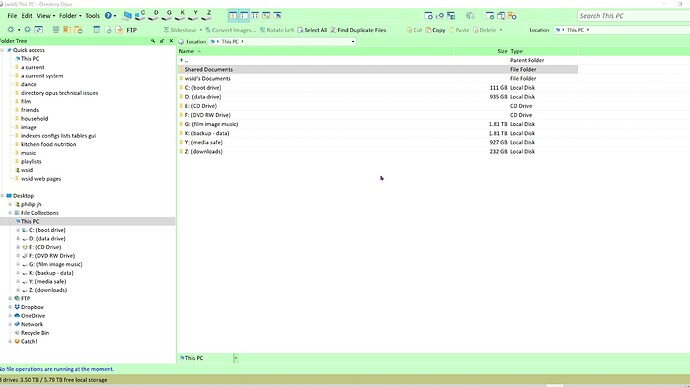 comment.
im sorry but to me this is taking too many attempts to solve this issue

in the previous post i attached several pics which showed what i want. its as if no one looked at them so please go back and view then as i feel they will give you a full idea of what i want

If you go to C: and then look in your status bar, do you see a little padlock icon like this?

If so, make sure it's open (unlocked) as shown above. If it appears closed (locked), click it to unlock it. Then go back to This PC (under Desktop) and see if that makes a difference.

well bugger me dead. that worked

as a side note and i said this to leo a long time back but in my not so humble opinion this program has WAY TOO MANY GOTCHAS. ALL THE ENDLESS SETTINGS REALLY ARE EXXCESSIVE AND MANY TIMES POINTLESS.

15 attempts to get to this point. not even bill gates does this to his users/ loosers

WAY TOO MANY GOTCHAS. ALL THE ENDLESS SETTINGS REALLY ARE EXXCESSIVE AND MANY TIMES POINTLESS.

Those bars are there by default. You must have removed them in the past.

If you find the options too numerous overwhelming, don't change them. Pretend they don't exist.

ref: QUICK ASSESS- THIS PC
some posts back , 12/16 i added some screen shots. one showed a red cross. concentrating on the red cross post, how do we remove all the items of the red cross window. this will leave only the drives and the bar graphs showing

also who controls QUICK ACCESS, is it part of DO or a third paarty program. i ask this as it seems to be somewhat independent of DO as a whole. just wondering.

We solved that near the start of the thread.

As a reminder, please Ask one question per thread, else it gets difficult to follow the thread and find solutions, even for yourself.

also who controls QUICK ACCESS, is it part of DO or a third paarty program. i ask this as it seems to be somewhat independent of DO as a whole. just wondering.

WAY TOO MANY GOTCHAS. ALL THE ENDLESS SETTINGS REALLY ARE EXXCESSIVE AND MANY TIMES POINTLESS

Yes, but one person's must have feature will be someone else's EXXCESSIVE and POINTLESS setting.

looking back over the history of comments etc there are more than a few who are, from mildly to fairly critical of many aspects of DO and of the people who manage support. one comment in particular was quite rude but ill reply to that particular person directly.

as for me, im just a dumb ass who struggles with the complexity of a lot of software and programs of today but at least im respectful of others foibles, unlike the generally, it appears pomposity and it seems sneering demeanour of some of the support people at DO, specially referencint the person just mentioned just previously.

just by the by leo, we, well you didnt actually solve the issue. basically you pointed out that there is some technical issue which will be addresses in the next update. thats a DETOUR while the road is under repair so to say. im hoping you will notify me whence that date comes along

The solution is to click This PC in the main part of the tree.

A fix for what happens if you click it via the Quick Access branch of the tree is coming. (You can't change what happens when you do that via any other method. You have to either click in the other part of the tree or wait for the fix to be released.)

im hoping you will notify me whence that date comes along