The graphs for modified and created datetime are the opposite of each other.
Is there a way I can set this to be the same and also set the direction of graph in general? 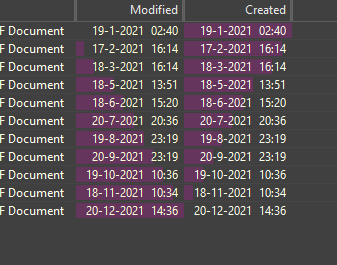 I don't see the same thing with my test files: 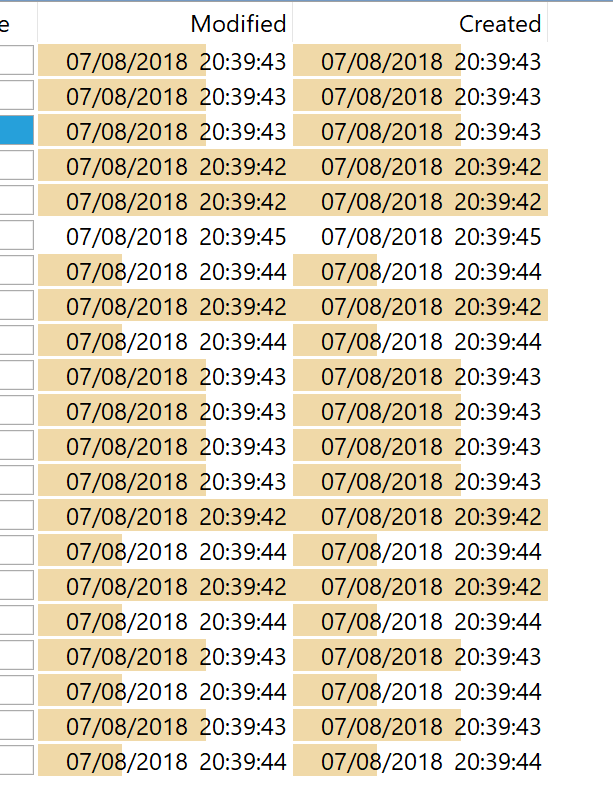 (Edit: Realised after posting that the dates on all my files are the same, with only the times differing. But it's also fine in other folders with different dates.)

As far as I know, there isn't a way to reverse it, but something strange is definitely going on in your screenshot.

Are those the standard Modified and Created columns, or are they custom versions added by a script? (I think there are some scripts on the forum which do things like that, and that might explain what's going on.)

Could you create a zip of those files or a similar set that cause the problem, that we could try with? (Making sure to preserve timestamps when creating the zip, of course.)

A bit late. I didn't get an email notification.

I use the standard columns. Right click on the a column header and select Created.
The result is the same when I select the 'relative' columns that only show the graphs. See image 1

The graphs are not update correctly after moving some files. In image 2 you can see the initial folder, then I move the csv files in to a sub folder and the graphs for modified are not maxed out to the size of the column and the ones for created are gone. Only after a F5 they appear as it should. 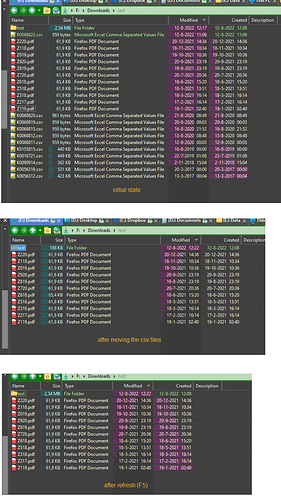 Attached the csv files from the example images.

Edit: Sometime it appears the Created coulmn is empty but the graph that should be maxed (because inversed) but isn't. So if the max value is only a small line, it's logical that the other files don't show a graph (or one that's to tiny to see). See image 3 for an example. 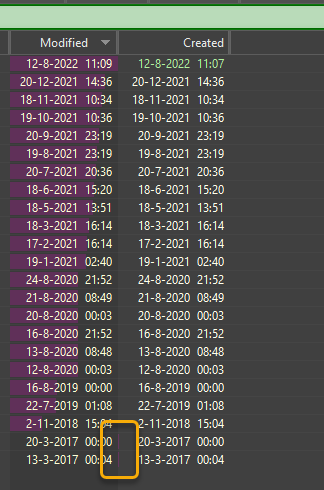 I guess the example files are of no use since it happens with all my files. The same happens on another pc. However both use the same profile.
I went to preferences and ran 'Reset All to Defaults'. And even though it doesn't reset everything to the default, it now showed the graphs the same for Modified and Created.
So there must be somewhere a setting that causes the issue.

I noticed that the oldest dates have the longest graphs, which is the case for my Created column as you can see in the images in the previous post. The modified column is the odd one out here.
I'll try if I can find the setting that is responsible for this.

Does that mean it’s working when files are moved/modified now?

Yes, in the default state the graphs are updates when files copied or moved.

It just hit me that I use a Status label for recent files. This is a rule based on the Modified datetime.
But I have a hard time to fine the definition of this rule. In not in Scripts or Filters. Can you tell me where to look?

I have no idea how this rule affects the Created date when file are moved/copied, but maybe the definition makes this clear.

Type Label into the Preference search field to find it.

I already did, but this time I found it at the very bottom of the very long list of label assignments. I remember having to search for this in the past.

Disabling all these filters and restarting Dopus has no effect.
Is there a way I can privately send you the backup of my configuration file so you can dig in it yourself? 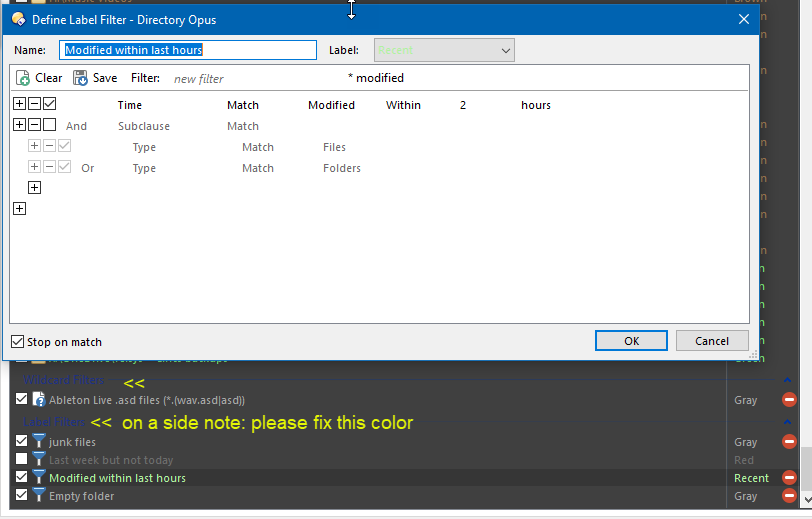 You can attach it to a private message here. Click on my picture for the option.

If you haven’t already, please check that the problem still happens for you if you restore the config on your machine.

The one setting I can think of which may affect things is the option to not sort new or changed files, where files added to a folder that’s already visible will be added at the bottom of the list (like old versions of File Explorer).

As far as I know, there isn't a way to reverse it, but something strange is definitely going on in your screenshot.

I forgot all about this, but there is a way to reverse it, and it was turned on in your config for the Modified graphs but not for the Created graphs. It's the Invert Graph option when Modify (relative) is selected in the list. 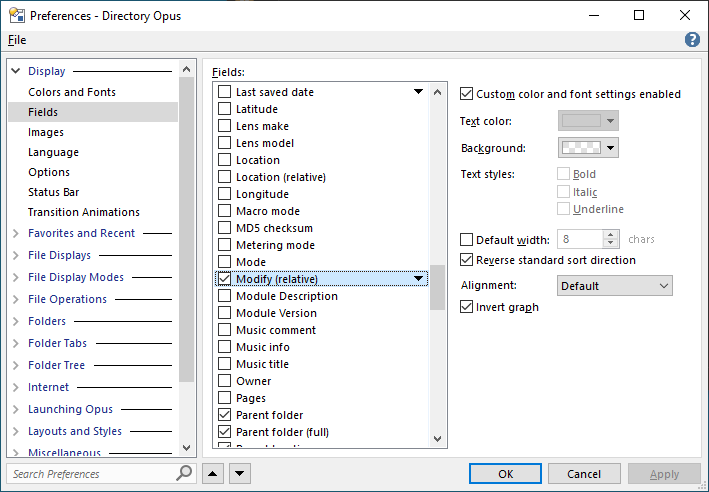 (We're going to be improving that Preferences page to group all the date/time columns together, and also make them sort better by tidying up their names, which should help a bit here. The different columns are quite scattered about at the moment.)