Grouping Drives in the 'This PC' layout

Hi Everyone!
Can someone please help me, I would like to group my drives that appear in This PC, with the collapsable bar like in this screenshot I found (although my layout is different): 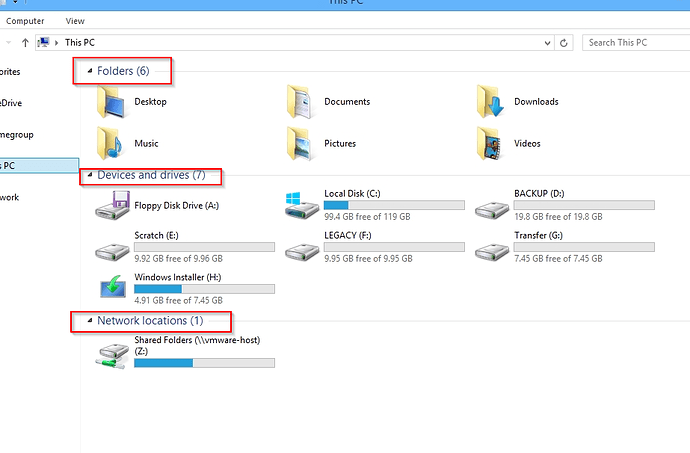 Thing is, I can't figure it out, I like to try myself before asking anyone so I learn, but this has stumped me. Mine shows like this, without the dropdown bars, which is what I'm after. As you can see I've had to use labels to easily read the drives. 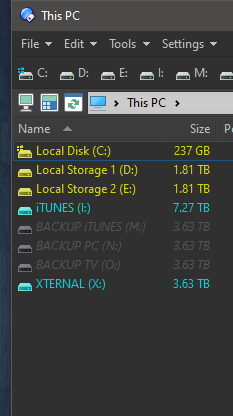 Also, can I create 'custom groups', so for example I can put my two backup drives (one USB and one internal) into a collapsable group?

Thank you for your help, i appreciate your time.

It should do that by default, but if it isn't you can get it back as follows:

If the Type column isn't on the right, you can drag it down from the left, under the General category. It doesn't have to be added to the list of visible columns in order to group by it; that's optional.

Also, can I create 'custom groups', so for example I can put my two backup drives (one USB and one internal) into a collapsable group?

Maybe via scripting, but not directly from the UI, at least as far as I can think, for the This PC folder.

Thank you, Leo! That is exactly what I meant! 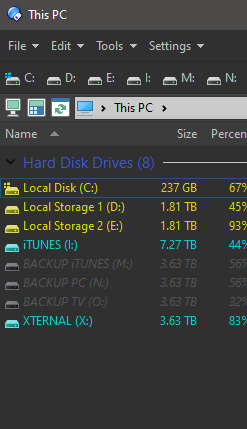 But I'm just wondering, can / should Dopus differentiate between internal drives and Removable USB?

I would be interested in scripting Directory Opus, I'll have a look around.

But I'm just wondering, can / should Dopus differentiate between internal drives and Removable USB?

It doesn't look like those drives are flagging themselves as removable (at least in the sense that the This PC folder uses in Opus or Explorer). They're probably flagged as hot-swappable, which isn't quite the same (internal drives can be flagged that way as well).

Short of checking which bus they are connected via, I don't know if there is a way to differentiate them if they aren't doing it automatically even in File Explorer.

Ok no problem, thanks any way. I just looked on the Windows explorer and they're showing as DO shows them, so it's obviously a Windows thing, not a Directory Opus issue.

At least I know where to look now, so thanks again, Leo.