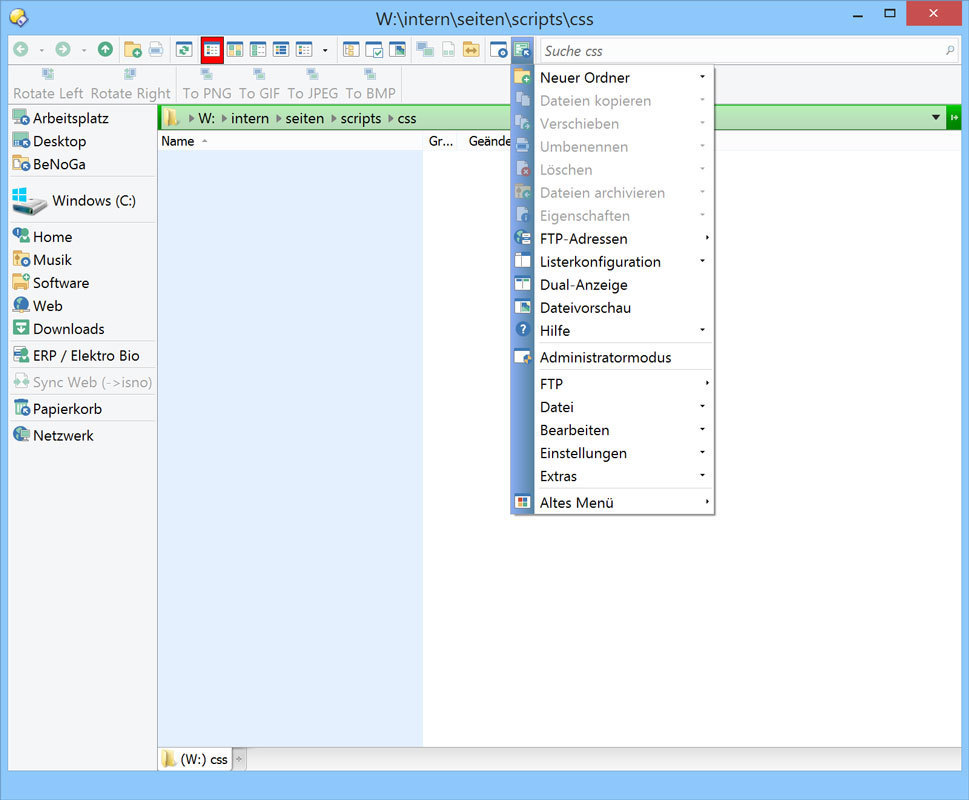 Any Ideas, where i can change DPI vor OPUS?

If you go to Settings - Customize Toolbars - Toolbars, then select each of the toolbars you're using (including the File Display Toolbar, which is easily missed as it's not selected in the list due to being a special case), you can switch them to use large icons on the right.

thanks you for your help,

i have already big icons selected: I'm not sure which sizes are included in the one you're using but the default icon set has 32x32 versions, and some icons sets go even larger.

I was looking at getting a high DPI monitor, 4k or something. benoga, are there any other aspects of Opus which do not scale with DPI?

with all available 4K-Monitors the pixels are not THAT small, with DPI numbers in the ~160 range, because the monitors are so large -- whereas benoga's 13" screen has Retina-like 276dpi. 160dpi is more like Full-HD on a mid size Notebook.

True. My current 15" laptop is about 150 DPI but then again I usually have it with the screen close to my face than a desktop monitor. I think I might be wanting 125% or 150% scaling for a desktop 27" 4k monitor. Probably means Windows 8 as well. I was waiting for Chrome to get good high DPI support and forgot that Opus might be an issue.

I tried Opus 11 in a VM and it is still broken.

How is it "broken"? Please be more specific.

When I set the DPI to 200% it doesn't scale all UI elements. The icons and the menu bar don't scale. I'm not sure if you can replace all of the icons, like the little arrows in the border area. In any case they should scale, because Windows 8 supports different DPIs for different monitors (say you switch your laptop between the built-in screen and a projector, or just have two very different monitors attached to your desktop) and the whole point of it is that everything scales seamlessly, not that you have to swap all the icons in every program's config each time.

I know it's not a quick fix, you would have to either implement support for multiple bitmaps per icon or vector icons (like SVG). Actually, there could be a quick fix, which would be to allow simple scaling of the bitmaps. It wouldn't look brilliant but would be a useful stop-gap measure until proper support can be implemented. When I do little WFP based utilities at work I use Inkscape to do the vector graphics, and export as xaml.

Right, so nothing is really broken, some things are just smaller than is ideal by default. (Compared to the majority of Windows software, which is horribly blurred and sometimes unusable on high DPI, it's not what I would call "broken". But yes, there is room for improvement.)

Calm down Leo, don't take everything so personally. As I carefully explained the correct action for Windows apps is to scale their UI elements according to the DPI setting. Apps that look blurred don't support any DPI scaling so Windows just does bitmap based scaling on their entire Window. Some DPI aware apps do just scale bitmaps, which isn't ideal but at least the UI maintains a reasonable layout and vector elements like fonts look good. Then you have apps like Opus, which as you say is hardly unusual as many, many apps are the same, which tell Windows they know about DPI and do scale some stuff but are incomplete.

I don't know what word you find acceptable for it; bug, flaw, issue, incomplete functionality or whatever. The point is that while there is a partial work-around it would be nice if it were fixed. I'm not sure what you want... Are you saying that if there is a partial work-around you won't fix a bug? Or that you would prefer people didn't report them? Perhaps you could just say thanks for testing it and making us aware, we will look at fixing it, we opened an internal bug tracker issue etc.