How to add Sequential numbering option in rename script

Hi
How can I add the Sequential numbering option in a rename script? How can add the other non-scripted options in the rename dialog (capitalization, automatic numbering, etc)?.
I want's to write a rename script for rename selected files with there parent folder name with sequential number. Yes I know this job need not any script at all. standard command can do this. but I want's to understand how the script works?

Please help me to find out my mistakes. Thanks

The script can generate a list of numbers itself if it needs to. Nothing Opus-specific is really involved there.

Your script isn't adding any numbers at all. It's also trying to rename multiple files to the same name, so of course you get an error message.

As you said yourself, you can do this without scripting, so why not just do it that way if you're struggling with basic Javascript concepts?

Your script isn't adding any numbers at all.

Then can you please tell me how to add this kinds of numbers or any example links will be helpful for me. Thanks 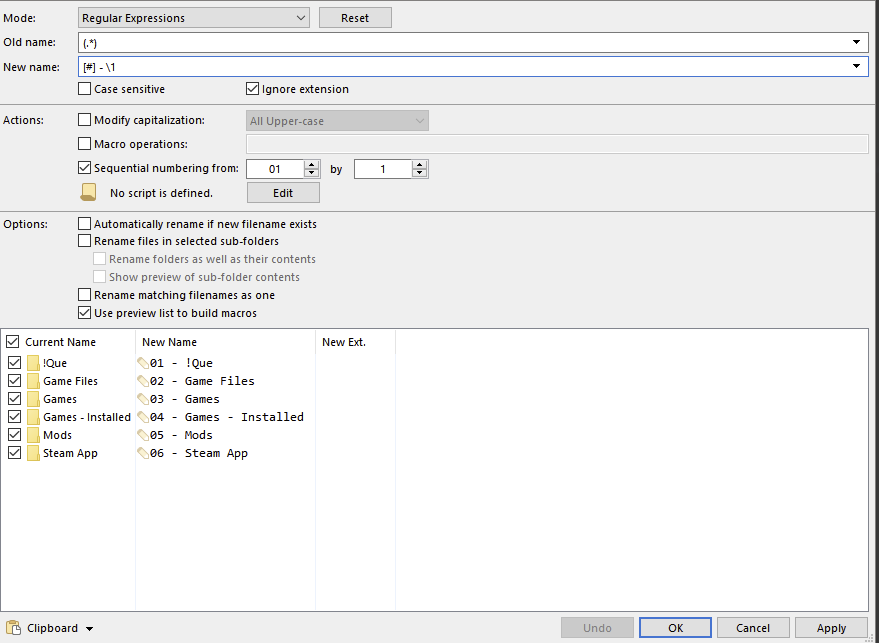 Simply copy the settings from the image above.

The " - " can be deleted if you don't want it, it's just for presentation

Thanks for the nice reply; I can understand your screenshot clearly, but I don't want to use the rename dialog box. Can you tell me how to do the same thing in the new Rename script function OnGetNewName(getNewNameData)? even I search the forum but don't find any example post.

Set your Rename up using the dialog, then save it as a preset. You can then run that preset from a button/hotkey without having to go through the dialog again.

Here is a script that does the same (do note I did not make this):

Thanks evernessince
I have tried to study that script. but it's so hard for a nob. is this script used a While.....Wend loop. But inside that loop there is lots of conditional If and End If nested that is make this script hard to understand. There is Path Condition also.
But what I want to achieve is not so complex like this script. I have no path condition, no if the new filename already exists condition.

So I think there is a more easy solution for achieve my want. Can any one give some easy example code in JavaScript.

You said yourself, near the start of the thread, that you can do this without scripting.

If you're still this confused about scripting concepts, and can do the same thing without using scripting, why don't you just do that instead of asking for people to write the whole custom script exactly as you want for you? This is just a waste of other people's time and goodwill.

If you can't learn scripting yourself, that's fine; not everyone can. But you can't expect the forum to keep writing custom scripts to your exact specifications. If you can't write scripts yourself, do what everyone else does and make do with the functionality which doesn't require scripting. You can still get a lot done that way, even if it takes one or two extra clicks sometimes.