How to use Rename Presets from this forum

This topic explains how to import .orp files containing Rename Presets into your Opus configuration.

A Rename Preset contains the definition of a single rename operation. You'll find various presets in forum threads, and can make your own within the Rename dialog.

The instructions below are for Directory Opus 12 and above. For older versions, the steps were similar but the UI was slightly different; major differences are noted below.

Set up the Rename dialog however you want, then save the current setup into a new Rename Preset via the Save As... item here: 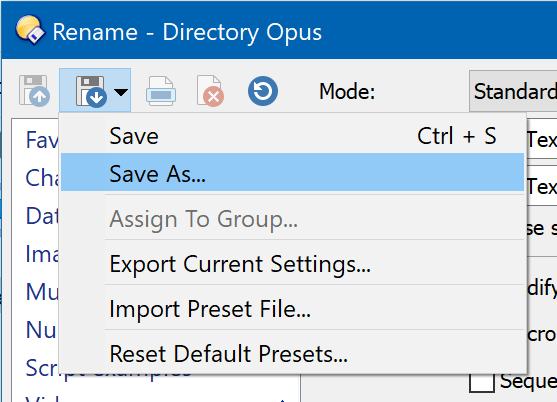 If you want to share the preset with other people, use the Export Current Settings... item in the same menu to save it to a .orp file.

First, open the Rename dialog by selecting a file and clicking the Rename button on the default toolbars:

Rename Presets save all aspects of the Rename Dialog into a named item in the list on the left of the dialog, which you can use to recall or re-apply the same settings later on: 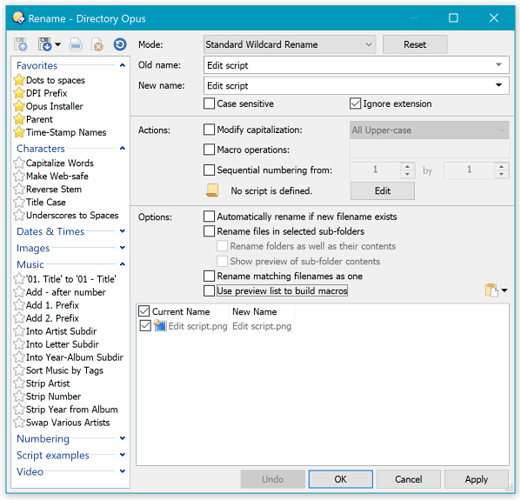 You can also import and export these presets via .orp files, to share them or to create backups.

To import a .orp preset someone has posted to the forum, for Opus 12 and above:

For Opus 11 and earlier:

Some rename threads include toolbar buttons or raw commands. For importing those, see How to use buttons and scripts from this forum.

Rename Scripts (not inside a Preset)

While rename scripts are usually shared in the form of .orp presets, which set up the whole Rename dialog, you might find some posts which just post a rename script on its own.

To use such a script, open the Rename dialog and click the Edit button to open the script editor:

The script editor will open on the right of the rename dialog. At the top there is a field to set the script language (usually JScript or VBScript). Change that to match the langue of the script, then copy and paste the script code from the post into the editor.

You can then save the script into a Rename Preset using the Save As... item in the Rename dialog's menus:

Using a Rename Preset outside the Rename Dialog

(In case you get deja vu, this section is similar to the end of the sister post, Rename scripts in JScript, VBScript and PerlScript. Each post has information tailored to the subject at hand, but there is a lot of overlap.)

If you wish to use a rename preset from a toolbar button (or menu item, hotkey, etc.), instead of from within the Rename window, there are several ways to do it.

Although it is not required, it is usually nice to use @nodeselect with buttons that rename files, since you often want to keep them selected to do other things with them afterwards. The examples below include this where applicable.