The well known behaviour of bar graphs changing their color (solid) from green to red isn't possible to configure in the status bar of DOpus.

Currently it is only possible to configure a bar graph which left part is green even if the disk if 99% full.

I would appreciate to have the whole bar in red as it is known from many other applications.

Yes, and in solid green when the disk is near empty.

The "computer-style gradient" graphs will give you what's shown in my screenshot. It's not exactly what you want, but similar. (With the Windows Aero theme, blue until the bar reaches 90%, then red for higher.)

Ok, didn't know that. Thank you very much for the quick answer.

Hmm, I have tried that for a day. And most of my drives are around 85% to 95% filled, leading to some drives appear blue and other red. That's some kind of confusing for me.

Maybe it would be possible to introduce another augmented gradient mode as improvement that fills the bar with a solid color from C1 to C2?

So the bars for each of your drives would have a very slightly different shade? Not sure I see the point, to be honest.

Currently I have five drives having a bar graph that is either blue or red:

From my point of view the bar-graph should be filled with intermediate colors like this:

Funny, even on my notebook I have the same situation ... 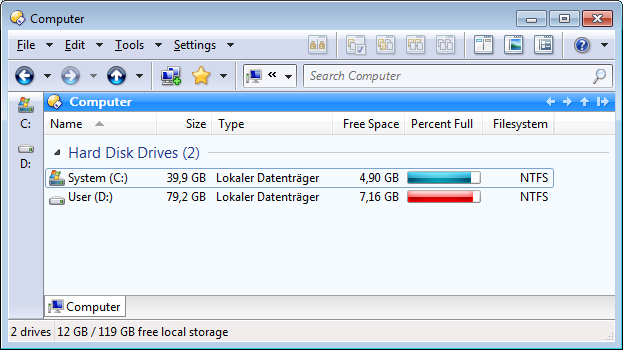