If Opus is exited and reloaded, the label assignments do not work. It does not matter if the script column is shown or hidden by default, the behaviour is the same.

The only way I've found to get them to take effect again is to go back into Label Assignments and immediately hit OK.

Here's a lovely video of it gfycat.com/IdenticalUnrulyDodobird

I edited a script column so it always returns "Yes" for everything:

And a label filter that makes things Red if the script says Yes: 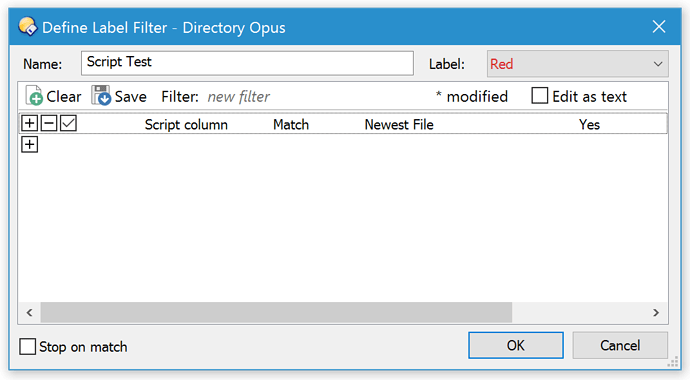 And things turn red when I launch Opus.

I recommend putting some DOpus.Output calls into your script to see when it's being called and what it is returning for each file/folder.

Will add debugging and dig a bit deeper, thanks.

I've narrowed it down to a completely different script failing (or something?) during initialisation.

Weirdly I can comment out just one line to get it to work, and the line doesn't make any sense:
col.method = "OnColumnVersion";

Oh, and just doing a "return;" immediately in the OnColumnVersion method itself doesn't fix it!

I'm completely stumped here. I can make the version column work or fail merely by renaming the script!

Calling it "AudaxTextVersion.js" fails every time.

Calling it anything else, e.g. "TextVersion.js" works every time.

Have a look in /dopusdata\ConfigFiles\scriptcolumns.oxc - There might be multiple entries for the script and the filter may be pointing to an old one.

If you remove any entries in there related to the script, then re-launch Opus, and then delete and re-create the filter, does it start working?

Please note: This isn't actually an issue since I can just call the script TextVersion.js and it works. However, it is intriguing!

There were a lot of repeats in scriptcolumns.oxc, but I'm still getting the problem.

I have done the following:

The column gets populated but the colouring doesn't work:

Going into Label Assignments and hitting OK fixes it:

And again, just renaming AudaxTextVersion.js to TextVersion.js makes it work every time! I re-deleted scriptaddins.oxc & scriptcolumns.oxc and re-set up the filtering after doing that, just to be sure.