Listing the Control Panel in the Folder Tree

Thanks in advance for your prompt & effective support,

Best wishes for a happy weekend, 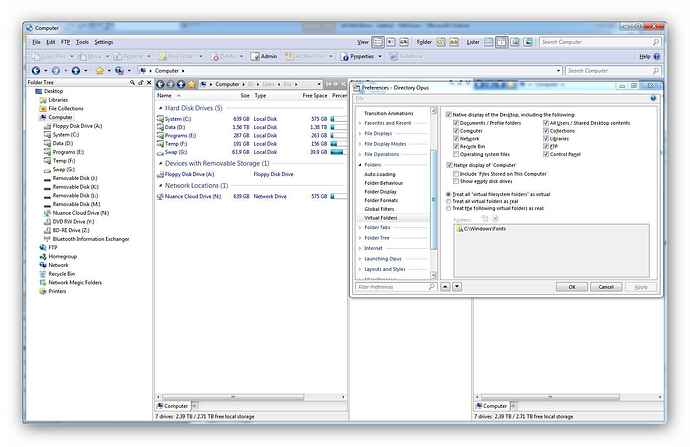 You can use the God Mode trick to create a comprehensive list of every Control Panel option (268 entries in my case).

I have never had any problems using God Mode, but try it at your own risk... Leo has said this about using God Mode: "The misnamed "god mode" stuff isn't even a supported feature of Windows, let alone Opus, and it's always had issues since people discovered it (even crashing in some cases, in Explorer not Opus, as it was never intended by Microsoft to be used the way it's being used; it exists to enable Control Panel searching, not browsing)."

And: "It has always has problems and quirks as a result, including crashing Explorer on some systems (without Opus even being on the machine). It not working in Opus for some people is probably just another one of those quirks, but since it's not an intended feature of Windows we can't really expect Microsoft to fix it either (unless they recognise its popularity and make it or a replacement an official thing)."

Thank you for the suggestion.

Actually, I am aware of the "GodMode" - have been using it before.

What I am looking for however, is for the "regular" listing of the Control Panel, that behaves as a "regular" folder for its various applets.

Somehow, as you could have seen from the image I attached, despite my checking the box for the Control Panel under "Virtual Folders", the item is not displayed in the Folder Tree.

Is this a bug? Am I overlooking anything?

My Lister's directory tree structure looks like yours, but I'm not sure how to get the Control Panel to display its applets, a la Windows XP's style.

Control Panel has to open an Explorer window, so it wouldn't make sense to have it in the folder tree.

I think an item to open it quickly is in the default Tools menu.

Thanks for your input.

Indeed, under Tools there is a link to the Control Panel.

This being said however:

Thanks again for your attention to this matter,

Also because showing Control Panel within Opus does not add any real value compared to showing it in Explorer. None of Opus's extra functionality really applies to that folder, which is more of an app-launcher than a directory you do file management tasks on.

If we added a similar item to the folder tree it would be really annoying, as a single click in the tree (or moving across the item with the cursor keys) would trigger another window to open and take the focus.

Thanks for the eye-opener.

I have however to agree with it only in part: actually, if you ask the Control Panel entry to appear in the "Start" menu and behave as a folder, by hovering over it (or clicking on it) you get a nice list of all the applets available (and for some, the right click on their name is even meaningful ...).

I believe that reproducing this behavior under DO's Folder Tree could help (I know I would use it quite frequently ...).

I don't see what the advantage of using Opus for the control panel list is over existing methods provided by Windows.

I find most control panels by typing into the Start Menu myself.

From my (relatively) short time using this forum, I get the impression that Dopus users continually look for new ways to use this tool. Some seem to request features that can be done easily with other programs (and that includes me) - but they think it would be nice to have it part of Dopus. A "one tool for everything" paradigm. You can choose to take it as a compliment that they think Dopus is that powerful - or maybe you just get tired of peoples requests to make dopus into so many other tools beyond a file manager.

This simple-minded Godless way took me less time than writing and checking this post:

If that is not enough, one could then organise the shortcuts into subdirectories corresponding to their organisation in the usual Windows Control Panel.

Thanks for the quick answer.

I guess you could say the same (access available via Windows regular interface) for ANY of the Virtual Folders / Windows Nameplaces that DO honors with a place in DO's Folder Tree (see FTP, Network, File Collections, Libraries, Printers, ...). The whole idea is to get a unified interface for accessing all the Windows tree structures, be they physical or virtual.
Kind of odd for me to have to plea for this, given that Control Panel WAS already part of the items displayed in the Folder Tree - it somehow disappeared from there recently; just trying to get it back ...

I guess you could say the same (access available via Windows regular interface) for ANY of the Virtual Folders / Windows Nameplaces that DO honors with a place in DO's Folder Tree (see FTP, Network, File Collections, Libraries, Printers, ...).

Not really, because you go through those folders to get to other directories below them, where Opus is useful.

Edit: Or they are folders where you can use Opus (FTP, Collections, Libraries. In fact, Collections do not exist outside of Opus, so they're a weird example to bring up.)

Opus is not useful anywhere in or below Control Panel. It adds no value (in fact, it's worse than using Explorer or the Start Menu for accessing Control Panel).