I have a folder structure with about 12.000 images. When I turn on flat view I can scroll through all images fluently. When I type a search into the search bar and get some images as a result that is also fine. When I delete the search after that I have to wait for 30 seconds and DirOpus is not usable at all. After that I can use it, but the little "circling icon" still is turning for another 30-40 seconds.

I had activated "load all thumbnails automatically" (translation from German). If I switch this option off, I have delay of maybe 1s which is totally acceptable, but when I want to scroll through the image list, of course I do not see the thumbnails which makes searching in this large number of images quite problematic.

Is it not possible to keep the once loaded thumbnails in a cache so that searching and deleting the search within the flat view would not cause another long delay? Also automatic loading of a flat view could be done in a background process so that it would not block DirOpus for other operations?

I couldn't reproduce this so far.

Could you give more detail on exactly what to type and click to make it happen?

That's similar to what I was doing.

Could you make some snapshots? We should be able to see what the code is doing during the delay that way.

I finally managed to create some dumps and emailed a cloud storage link to crashdumps@gpsoft.com.au with a reference link to this thread.

Thanks a lot for caring and your patience!

Thanks for sending those!

Each snapshot shows different things going on, so it doesn't look like things are getting tied up in any one place. There are some things that they point to which are worth a try:

What is very clear: the flat view in one tab with several 10K images is the problem. When I exclude this from my standard lister and start DirOpus, then it is ready to go in less than a second and quite responsive. When I turn on the flat view with automatic loading the thumbnails then about two minutes my whole system is laggy, even for other applications. I have disabled Fences, Listary, MacType and also deinstalled Iolo System Mechanic.

When I turn on the flat view with automatic loading the thumbnails then about two minutes my whole system is laggy, even for other applications.

My guess is antivirus in that case, as it's one of the few things that can slow down everything at once (depending on how the antivirus is written and if it queues up all scans system-wide instead of having a separate queue per process).

It could also be very low memory, very heavy storage access or very high CPU usage (on all cores), which Task Manager should show if that's the case. A thumbnail generator going wrong could cause those.

I have disabled Windows Defender as well as Windows indexing (except for Outlook). There is more than enough memory. During the wait time CPU usage is constant 100%. I have set 2 threads for thumbnail generation. In the attached Task Manager screenshot you can see that I have to wait for almost two minutes. 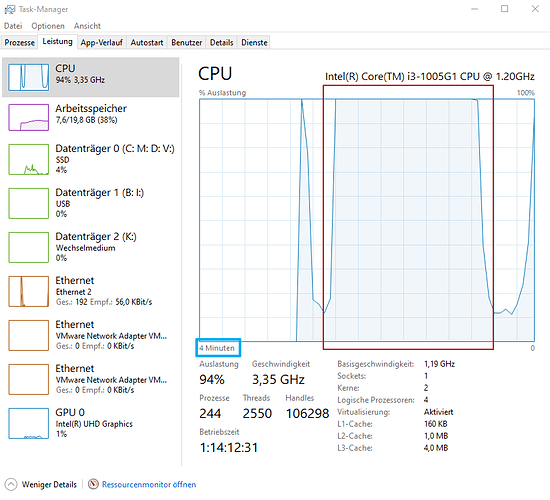 If that would occur one time then I could endure it, but any time I leave this folder and come back later this process starts again and takes this time again although I have activated thumbnails cache. I do not understand this. 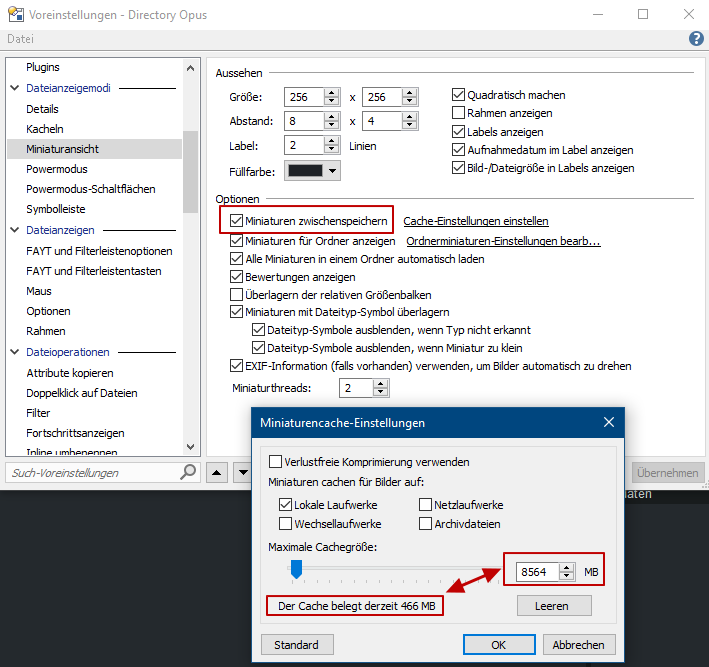 In this context I was astounded again. As for trying to optimise performance and reduce danger of CPU overload I disabled Windows indexing only to recognize that now in that specific folder branch view we are discussing here I cannot search quickly any more for specific tags. So Windows indexing is also driving the tags search within DirOpus?

Is the issue that closing the search tab takes a long time?

Or is the issue that generating thumbnails for everything in the search results takes a long time?

What type of files are involved? (As in file formats, rough dimensions.)

I'm getting a bit lost in the different things here, and now we also seem to be talking about metadata tags and search indexing. Let's focus on one thing at a time, please. If there are other issues to the one in the thread's subject line, please start separate threads for them.

Some quick information, in case it saves the need for additional threads:

The main problem is the long thumbnail generation / refresh time when I create a new tab with that flat view of that directory. The same happens, if I save the lister layout with that specific directory structure as a flat view. The same also happens when I do a search and quit this search. All this triggers a long thumbnail generation process. This is the main problem.

I disabled shell thumbnails, but that also does not seem to help much.

The directory in question consists mostly of pictures and movies from my smartphone, size of pictures is roughly 4-6 MB, some up to 16MB. Videos are 20 - 100MB, a few up to 300MB

Just to boil it down further: Why do I have so long although the thumbnails have been cached?

The directory in question consists mostly of pictures and movies from my smartphone, size of pictures is roughly 4-6 MB, some up to 16MB. Videos are 20 - 100MB, a few up to 300MB

I'm guessing it's only the videos which are slow. Is that correct?

Something that may help: Configure the Opus Movie plugin to not generate thumbnails. It may be trying to generate movie thumbs and taking a long time before failing, at which point Opus will ask the shell for them.

That could be the cause of the delay, and would explain why they're slow even when cached (by the shell).

If the files are still slow, what happens when you view the same files in File Explorer? It should use the same cache for video files.

The change in configuration did not reall help (exclude videos).

File Explorer (Windows Explorer) does not support branch view so a real comparison is not possible.

Explorer can show search results of *.avi below the starting folder.

See if Explorer takes a long time to generate thumbnails for those avi files.

I suspect it will, and the problem lies in that direction.