Since latest beta when confirming a popup (e.g. deletion) other windows sometimes come to front. Unfortunately I can't reproduce it.

It also randomly happens when I had DO open, delete a file and then e.g. Opera came to front (not because I switched to another window in the meantime).

I've been seeing the same thing (losing focus) when I use one of my buttons that has the @confirm in it.

Not 100% certain which version this started with (currently on 12.3.1) but I'm guessing maybe a month now this has been happening. Just posting the button I use that I know recreates the issue every time.

Losing focus also occurred with this button. No @confirm but it does have a dialog box

The same code without the dialog box does not lose focus.

For me, I notice it all the time because I have Firefox open behind Dopus. After a dialog box appears and after the operation finishes, Firefox jumps in front of Dopus.

Maybe it's the same bug as descriped here by me: Loosing Focus After Rename Operation (Key-Shortcut)

Thanks for pointing that out, Subway.

Sounds like it could be the same considering you also have a dialog box being used. I get the same results using your button. Maybe 12.3.3 will have a fix

Reverted back to 12.3, because nearly every confirmation pushes other windows to front and that's really annoying.

I've also seen this "other application to front" thing happening.. always thought it was me or my computer fooling me. o)

Ditto. I thought it was something I was doing until I read this post.

The bug has been confirmed and has a fix written for inclusion in the next beta.

If needed, you can revert back to 12.3 stable to avoid the problem. The problem only affects recent beta versions. Smoking out bugs like this before a wider release is why we have beta versions.

No need for more people to confirm this. It is done & dusted and just waiting for the next beta to go out after the holidays.

BTW - I was moving and copying folders to another partition. I had no applications active, except Opus.
Maybe it is a matter of settings, but then again, maybe it has to do with this focus issue, I don't know, but after each copy or move, Opus opens the next folder in the list, i.e. it shows the contents of the next folder.
Need to click on the 'Go Up' button to get back the list of folders.

@leo
delete my post. had the issue maybe 4-5 times, but after again trying again just now, nothing changed and Opus worked as expected.
frankly I don't know why it went wrong the first times, but delete my post and avoid further confusions. sorry....

I was about to post about this same issue and saw this thread. I just upgraded to 12.3.2 from 11 (was hoping they would have another 50% off sale in 2016 like they had in 2015 (but I missed it) and noticed the switch/loose focus issue. To me it happens every time with a DELETE. I start the delete, the message comes up with the option to UNPROTECT files I am deleting (in this case, I had a copy of my DropBox folder) - I hold down SHIFT to select UNPROTECT ALL and press enter to continue. It then switches focus to another program I have open, in this case CCleaner. At first I thought it was a fluke but it has done it every single time with this scenario.

Reiterating above, and locking the thread so it stays visible at the bottom:

The bug has been confirmed and has a fix written for inclusion in the next beta.

If needed, you can revert back to 12.3 stable to avoid the problem. The problem only affects recent beta versions. Smoking out bugs like this before a wider release is why we have beta versions.

No need for more people to confirm this. It is done & dusted and just waiting for the next beta to go out after the holidays.

[Unlocked again now 12.3.3 is out: If there are still problems now, please report them]

With v12.3.3 I still see the issue reported there happening, when resizing images only.

This happened a few times now, reason why I'd like to bring this up again.

So
I select a few images
rightclick convert - resize
conversion takes place
once done - in my case - Firefox with an open website, in the background, is brought to the foreground and overlaps Opus.

It is a minor thing, one click and Opus is back.

Following those steps, I have seen what you describe a few times, although I can't get it to happen all the time.

For me, it seems to happen more often if I have a lister open, then open another lister, close the old one, and perform the steps. I'm guessing it happens if the stack of windows on-screen is in a particular state, but I'm not entirely sure and can't find a way that always triggers it. So far I have never got it to happen for the same window twice, either.

Jon know more about this than I do so hopefully he'll be able to reproduce it as well. Thanks for the report!

12.3.3: Another window came to front again when I d'n'd files from FTP to local drive in dual mode and progress dialog appeared. Not reproducable and not always.

I also experience many z-order issues. One example is when I use the "Convert Image..." function via right click context menu. When I convert an image to another format, but the target file already exists, the corresponding pop-ups all appear behind the lister. So I have to click on the queue bar, to bring them to the front and even then the z-order is wrong and the replace requester lies behind the copy progress display.

I can add some screen shots if desired.

Some screenshots for the z-order convert-issue, it's 100% reproducible, at least on my machine here:

Use any image file and make sure that the target format already exists, like this: 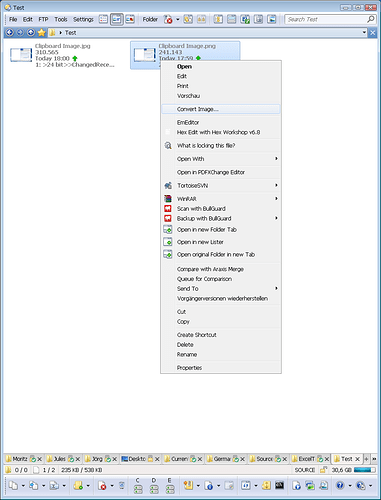 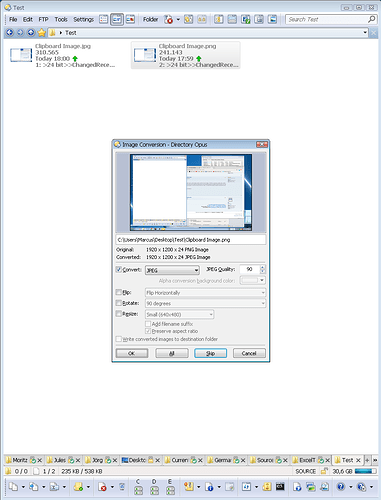 After confirmation, Opus detects the overwrite conflict, but dialogs pop behind the lister. The only indicator is the yellow progress bar on the bottom: 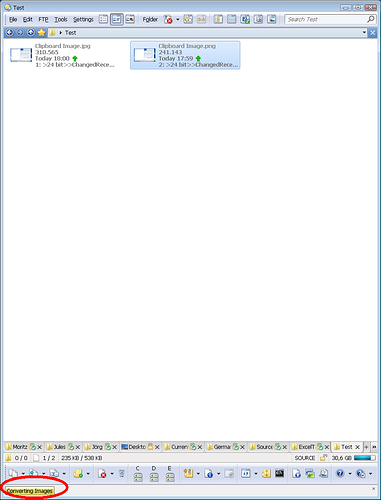 If you click on the yellow bar, this bring the dialog boxes to front, but still in wrong order. You can see that the replace confirmation is behind the progress window. It think it is intended that this should be the uppermost window because it's the only one you can control in this state. 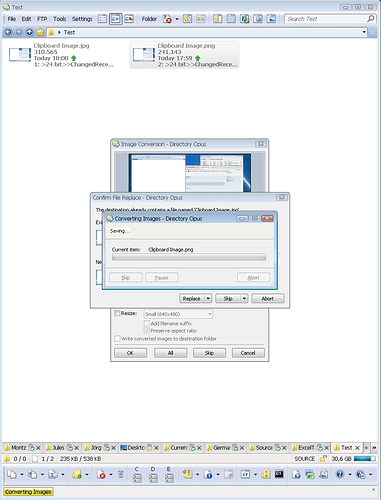 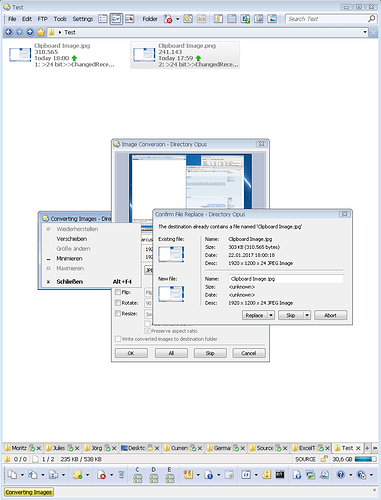 I can still use the function, the sorting is just very odd.

We think we've found what was causing the problem there, and will have a new fix to try in the next beta. Thanks for all the details!

Unfortunately I have exactly the same behaviour in 12.3.4 regarding the issue with the image conversion dialog boxes.